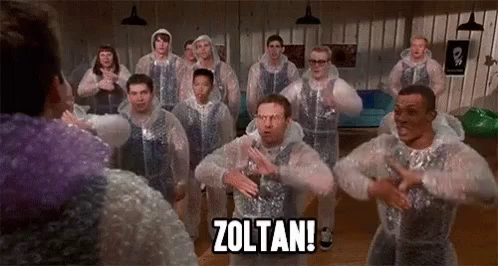 You might not know who Zoltan is. Let's give him a proper introduction before we explain his devious plan to get the Fed out of a hole... 👇

TL;DR He's been around the block and knows a thing or two.
These days he usually specialises in confusing everyone with extremely technical explanations about financial plumbing, especially in repo markets.

Zoltan went full off-piste and called for a Volcker moment... 👇

My friend Paul (Volcker) became chair of the Federal Reserve System in August 1979 after being nominated by President Jimmy Carter, at a moment when America was beset by national doubt and stagflation.

He immediately set to work to tame inflation, which was running out of control, and rapidly increased interest rates.
They peaked at 20% in December 1980.

Paul succeeded in halting inflation, and in doing so he re-established central bank credibility, even if the monetary policy medicine caused a sharp slowdown in 1981 and a recession in 1982.
Via William Rhodes

So THIS is what Zoltan's calling for...

The worst thing? It's incredibly logical.

Hold your fire, I'm not saying a recession would be a good thing.

Let me explain as simply as I can...

Inflation in the US is high (you may have heard 🙄), and the Fed is woefully ill-equipped to deal with this.

Why? Because monetary policy has long and variable lags. It takes time to filter through the system.

When the Fed finally hikes rates by 0.25% (or even 0.5%) on March 16th, who's actually going to cut back on their spending the following day, week, or even month?!

If you estimate the true lag in monetary policy at 12 months before it has a tangible effect on the economy (which is probably on the low side), it's pretty useless right now.

Especially if you consider that inflation is more of a psychological/behavioural phenomenon than a monetary one (Milton Friedman rolling in his grave at that but idc).

There's an obvious caveat: The data used goes back as far as 1871, and the economy has changed multiple times over that period.

And the longer it hangs around, the more we all become accustomed to it and adjust our behaviour accordingly...

It starts at the top.

In recent earnings calls, companies are grandstanding about their pricing power and how they've been upping prices. Only a few have expressed concerns about keeping it going...

So, does this mean inflation's now entrenched?

He sounds sure, but who knows? Wage growth doesn't seem to be quite keeping pace and maybe it is just a temporary high from mammoth fiscl and monetary support...

That said, there's no doubt that the longer inflation hangs around at high levels, and/or the more it expands from goods into services (broadens), the higher the odds are that the Fed goes full Volcker...

And the obvious thing to target is asset prices.

The large number of hikes the market has priced and the Fed implicitly sanctioned has had little impact on long-term interest rates, mortgage rates, or equities to date.

Don’t get us wrong – there’s been some impact, but not enough.
More is needed.

To slow OER inflation, mortgage rates need to get higher and house prices flat or outright lower. To slow all other services – driven by a shortage of labor –we need more supply of labor, not less demand for it through a recession.

Again, inclusive low unemployment is a political imperative and, by extension, so is redistribution via stronger wage growth.

JayPow hasn't forgotten (or forgiven) those money printer gifs you made...

And if you want to do the whole FIRE thing (Financial Independence, Retire Early).... You can't. Your country still needs you...

The decisions of central bankers are always redistributive.
For decades, redistribution went from labor to capital.
Maybe it’s time to go the other way next. What to curb?
Wage growth? Or stock prices? What would Paul Volcker do?

Some will say that he should retreat back into his world of financial plumbing and stick to what he's good at.

I'm not one of them. It's an interesting perspective from someone who's worked extensively with policymakers around the globe. Someone who understands how they think...

It doesn't matter if you think it's the right response. If you believe the Fed are trapped, then they'll need to find an outlet...

As Sun Tzu says in the Art Of War:

When you surround an army, leave an outlet free.
("to make him believe that there is a road to safety, and thus prevent his fighting with the courage of despair.")

Why do credit spreads matter?

Over the last few weeks, we've seen a tonne of different narratives pop up... Russia vs Ukraine (no not a European friendly, very much a European UN-friendly)... The Fed, fedding...

Whether it's the property crackdown or pandemic policies, China's low consumption is concerning