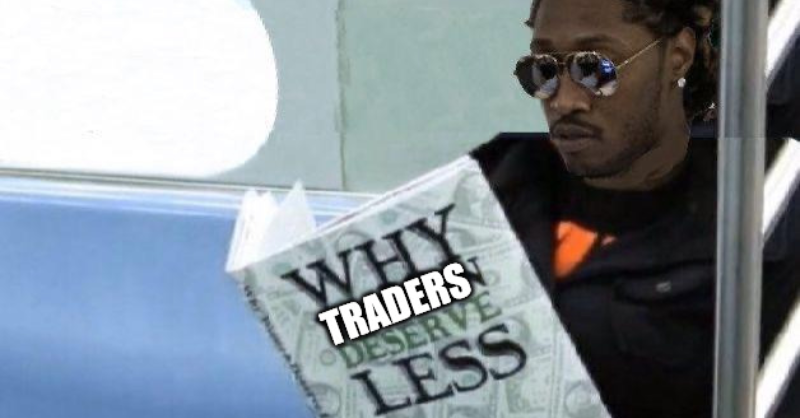 The mental side of trading has always intrigued me. People are literally, mental. I don't mean that in a derogatory way either. We're all walking basket cases. Full of biases, weird ideas, and all too often, supremely confident in our untested beliefs.

Even massive, untestable things like astrology, the paranormal, global conspiracies and religion.

All unproven (and/or unprovable), but 90% of people believe in at least one of those phenomenons. Although if you add statistics to a statement it becomes more believable.

95% of people believe in that stuff now.

For me, a normal person doesn't exist. At best, normal just means 'able to function and survive in society'. That's it. The idea that the majority of people walking this earth are sane & rational (and that this is normal) is an entirely alien concept to me.

The proof? I've seen them, and so have you. Look around your office or your family. Where are the normal ones?

Combine this insanity with all of the hidden emotional ties to that thing we call money, then climb aboard the trading rollercoaster. It's a hell of a ride.

When I first got into this game, I was surprised by how few made the grade. How hard could it be?

Over time, I learned (and the market still likes to remind me) just how competitive and tough financial markets are.

Sometimes, they're too easy.

"But how can they be too easy. Why would that be a problem?"

Because we're not wired for easy things. Success is something that must be earnt.

It's why people feel a strong sense of injustice if they perceive that anyone is succeeding unfairly. (Just look at the reactions to recent outsized profits for the oil majors under exceptional circumstances).

And I wonder if this need to earn success is something that trips traders up.

The link between earned success and life satisfaction is well established by researchers. The University of Chicago's General Social Survey, for example, reveals that people who say they feel "very successful" or "completely successful" in their work lives are twice as likely to say they are very happy than people who feel "somewhat successful."
It doesn't matter if they earn more or less income; the differences persist.

The opposite of earned success is "learned helplessness," a term coined by Martin Seligman, the eminent psychologist at the University of Pennsylvania. It refers to what happens if rewards and punishments are not tied to merit: People simply give up and stop trying to succeed.

You couldn't ask for a more perfect description of trading than this.

The market can reward you for terrible decisions, and punish you for your best, most well-researched trade idea. To make things worse, it can be entirely random.

A simple headline hitting the wires can push the market one way or another.
The trader wins or loses. But not on their own merit. Just luck.

Over time, this random noise / variance roughly evens itself out. And as a trader gains experience, they get better at identifying the lucky wins and bad beats for what they are too.

The idea of earning success is intriguing. Is that why this is true...? 👇

"Making money is easy. Keeping it is the hard part"

Especially if it happens too quickly. Think about the life-changing amounts of money some traders pulled in during the crypto boom. Then read this 👇

A significant win can be an emotional rollercoaster.

'Sudden Wealth Syndrome', coined by psychologist Stephen Goldbart, is the collective name given to the psychological issues that are associated with new or sudden wealth.

The Money, Meaning & Choices Institute, where Goldbart works, says that those who suffering from the affliction often experiences increased anxiety and insomnia.

On top of that, they can have feelings of confusion and guilt about their fortune. It can cause people to make decisions they wouldn't otherwise have made and adopt self-destructive behaviours.

Now, I've never been one for blaming psychology for trading losses. A lot of the psych stuff is just a form of avoidance. You can't just go and "sort your head out", come back the next week and miraculously stack profits with the emotional range of a robot.

Psychological triggers and weaknesses need to be part of the strategy. Part of the risk management. If you find that you're the kind of person that doesn't handle large drawdowns well, why persist with a strategy that often puts you in that position?

If you're the kind of person that gets triggered by being stopped out, maybe extend your time horizon, reduce trade size.

There's no 'right' answer. Everything's a tradeoff and everyone's different. But psychology isn't something to be fixed. It's something that needs to be worked into the overall approach.

Otherwise we're at the mercy of stuff like this... 👇

Mr. Seligman said: "We found that even when good things occurred that weren't earned, like nickels coming out of slot machines, it did not increase people's well-being. It produced helplessness. People gave up and became passive."

Any kind of learned helplessness leaves traders at the mercy of the market. And she's not really the sympathetic type.

🔔 Why Central Banks Are Hiking To Cure Supply-Driven Inflation

Why are central banks hiking rates when the current inflation is (mainly) supply-driven?

Some people are ecstatic, some in disbelief, some unsurprised... Mixed feelings all around, just like markets, always.