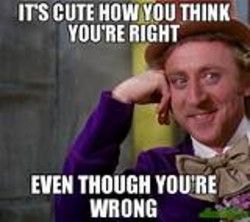 ... and there's nothing wrong with that.

Sooner or later, we all have to accept that being wrong is simply the price of education.

It's a fee we pay to learn, and some lessons can be more expensive than others (depending how we choose to learn them).

Or we simply don't learn the lessons. We keep making the same mistakes, trapped in our prisons of cognitive dissonance...

Cognitive dissonance refers to the state of tension that occurs when a person holds two ideas, beliefs, attitudes, or opinions that are psychologically inconsistent.

This conflict manifests itself as a state of mental tension or dissonance, the intensity of which is visible in magnetic resonance imaging studies of the brain.

Cognitive dissonance is a universal human condition. Only the magnitude varies.

If we're all horrendously susceptible to bias, then the likelihood is that we'll often be wrong.

So how do we avoid doubling down on our wrongness?

The Art Of Disagreement

To be honest, I haven't fully figured this out yet. Maybe I never will. But there's definitely an art to disagreeing with others so that you both/all benefit.

Trump's a brilliant example to use actually.

He was right about some important "big picture" things (US- China trade imbalance, German dependence on Russian gas etc.) but the way he delivered the messages to other policymakers wasn't always the most effective.

His style was inflammatory, divisive and it created camps of people who were with either with him or against him...

This was evident in political circles, and among the public where supporters would hang on his every word, while his opponents would deride everything he said. Both groups would do this regardless of the substance of his thoughts.

"Trump derangement syndrome" is a pejorative term usually for criticism or negative reactions to former United States President Donald Trump that are perceived to be irrational, and have little regard towards Trump's actual policy positions, or actions undertaken by his administration.

The term has mainly been used by Trump supporters to discredit criticism of his actions, as a way of reframing the discussion by suggesting that his opponents are incapable of accurately perceiving the world.

Separate the person from the ideas

Actually, let's rephrase that. Separate the personality from the ideas.

Knowing things about who the person is can be useful. Their background, perspective, and experience all shape their opinions. i.e. why they believe the things they do.

💪💪 Pegasys is the first decentralized exchange built entirely atop Syscoin... Find out more ahead of the March 16th airdrop 👇

A financial plumbing expert at Credit Suisse, but recently he's spread his wings and expanded his writing into other areas...

Most recently, he published a note entitled Bretton Woods III.

We are witnessing the birth of Bretton Woods III – a new world (monetary) order centered around commodity-based currencies in the East that will likely weaken the Eurodollar system and also contribute to inflationary forces in the West.

A crisis is unfolding. A crisis of commodities. Commodities are collateral, and collateral is money, and this crisis is about the rising allure of outside money over inside money. Bretton Woods II was built on inside money, and its foundations crumbled a week ago when the G7 seized Russia’s FX reserves…

Pretty high level stuff. The gist of it is that 'someone' will need to provide a commodity backstop and that it can only be the Chinese central bank. 👇

If we are right, and if this is a “crisis of commodities” – a 2008 of sorts
thematically, if not in terms of size or severity – who will provide the backstop?
We see but only one entity: the PBoC!

Western central banks cannot close the gaping “commodities basis” because
their respective sovereigns are the ones driving the sanctions.
They will have to deal with the inflationary impacts of the “commodities basis” and try to cool them with rate hikes, but they will not be able to provide the outside spreads and won’t be able to provide balance sheet to close “Russia-non-Russia” spreads.

Commodity traders won’t be able to either. Remember that Glencore rose from the ashes of Marc Rich + Co, and with Switzerland along with the sanctions, Swiss-based commodity traders will think twice about arbitraging the spreads.

But the PBoC can… as it banks for a sovereign who can dance to its own tune. To make things more complicated, China is probably thinking deep and hard about the value of the inside money claims in its FX reserves, now that the G7 seized Russia’s.

Now, he might be right or he might be wrong. The beauty (and utility) of the note is how he's laid out his flow of thoughts.

It's all there in the note. Just like the old school days when teachers would make you "show your working". In that regard, he's a model student.

But that doesn't mean it's free from bias. Zoltan's view is bound to be shaped by his experience in financial architecture. Is it fair to assume he probably has a money-centric view of the world which could influence his conclusions?

Maybe he misdiagnosed the problem.

"To a man with a hammer every problem is a nail"

Zoltan’s solution - that the PBOC be a kind of grand commodity backstop misses the point that the problem is not money - it is logistics.

From this excellent reply by Alex Turnbull 👇

Who's right and who's wrong?

I have no idea. It might be years until we know. But from reading their work I have a far better understanding of the problem.

And isn't that the point?

There are no answers, so being "right" is the wrong thing to aspire to. Disagreements are useful to build knowledge and understanding.

And when you think about it, that's how markets work.

"Fair Value" is simply the sum of thousands of disagreements.

The Veteran explains the evolution of nuclear power, and how Germany came to rely on Russian gas...

"[INSERT MARKET]... is a device to transfer money from the impatient to the patient.”