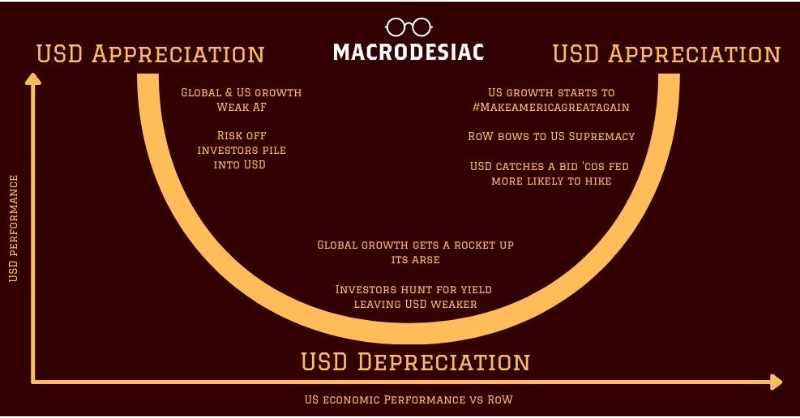 💵 Why is the dollar so weak?

Judging by my DM's, there's some confusion about why the dollar has been tracking weaker lately. All we need is the dollar smile 👇

For most of last year, the US economy was the big outperformer. Europe and Japan were struggling with high energy costs, and a higher risk of recession.

The US economy was going great guns internally, and they got to export loads of high-priced energy as well. To top it off, the Fed was set to hike rates to a juicy 5%+, which pushed yield differentials wider at the time.

All of which put us firmly in the top half of the smile, which is USD positive...

Then energy markets calmed down. US growth became old news and everyone started looking at China and the reopening trade. A quick look at China's stock markets should tell you that we've quickly priced a lot of that optimism in. Europe is hoping to benefit too.

In fact, it's this general normalisation of global trade and the global economy which has been the biggest driver of dollar weakness.

Yield differentials have narrowed as the US nears the end of the hiking cycle and others catch up, both from a rates perspective and the economic viewpoint.

But it's hard to call that as the ongoing base case. Microsoft's guidance last night was a perfect example of why. A truly global company is guiding growth lower.

They're not forecasting disaster, but it's clear that the pressures are there. CEO Satya Nadella laid it all out in the earnings call.

I want to start with the context I shared with our employees last week on the changing environment and our priorities. As I meet with customers and partners, a few things are increasingly clear. Just as we saw customers accelerate their digital spend during the pandemic, we are now seeing them optimize that spend.

Also, organizations are exercising caution given the macroeconomic uncertainty. And the next major wave of computing is being born as we turn the world's most advanced AI models into a new computing platform.

In this environment, we remain convicted on three things. This is an important time for Microsoft to work with our customers, helping them realize more value from their tech spend and building long-term loyalty and share position while internally aligning our own cost structure with our revenue growth.

None of this is especially indicative of positive growth. Focusing on the long-term and really helping customers understand the value proposition is (at least to me) code for 'sales are getting harder to close'.

Again, there shouldn't really be too much unexpected here. Growth is expected to slow. The better questions are 'by how much?' and at what point does everybody panic?

That should be the point that the dollar strengthens again and we move into the top left of the smile.

We still think the most likely trigger is when employment really turns. For now, it's mainly tech companies (that overhired) plus some other pockets, such as Ford cutting jobs, or 3M slashing 2,500 roles.

All the signs of a slowdown are in plain view. The recession question is probably when rather than if, yet apparently people are looking at cosmetic surgery rather than jobs data for a sign of when that happens...

How analysis of nosejob demand or trends of men buying underwear adds to that picture is beyond me...

"Complexity is the enemy of clarity"

"Everything should be made as simple as possible, but no simpler"

It's often said that the entire system is rigged, a ponzi created so that 'they' can profit. Is that the full story?

Layoffs are on the rise as companies tighten their belts and the global economy slows. Central banks want to leave rates on pause and quietly exit stage left. But for how long?