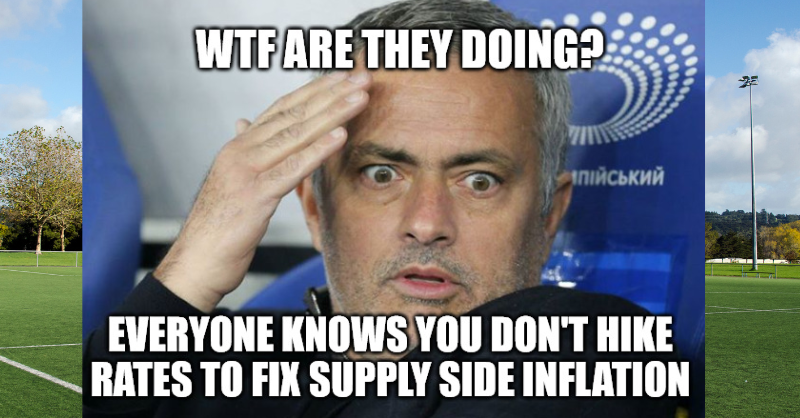 🔔 Why Central Banks Are Hiking To Cure Supply-Driven Inflation

There's a question floating around at the moment: Why are central banks hiking rates when the current inflation is (mainly) supply-driven?

Central banks and monetary policy mainly affect the demand side of the economy by increasing the cost of credit, and diminishing risk/investment appetite.

So why bother with all the rate hikes when inflation is destroying consumer purchasing power anyway? It's basically smashing demand with two different hammers at the same time.

A good rule of thumb for central banks is that they'll usually settle for the least-bad option, and/or argue that they're acting to prevent some kind of counter-factual alternative (worse) scenario.

One of those arguments now is that if they don't hike interest rates, consumers will start to change their behaviours.  For example, central banks focus on consumer inflation expectations and how 'well-anchored' they are... 👇

This part of the theory works on beliefs. As long as people believe inflation will fall to 2% "over the medium-term", their behaviours won't change drastically in response to inflation.

Personally, I think inflation expectations are complete horsesh*t. Have you met the average person? Even above-average people are TERRIBLE at forecasting the future, especially five years from now.

Bear in mind that almost every economic forecaster parroted the transitory inflation line for months, so what hope has the average person got?

Will they just blindly grab at something that's happening in the present and extrapolate that into the future? Like the price of fuel?

However, there IS a counter-factual here. Imagine that central banks were still confidently sat in the transitory camp?

What would inflation expectations look like in that scenario?

We'll never know for sure, but surely the odds are pretty high that the peoples faith in returning to a low inflation world would be seriously tested...

So, how about those behaviours...?

Let's bring in the companies and what they're doing in an inflationary world...

The first sign that this wasn’t going to be a typical corporate earnings season came early on the morning of July 12, when PepsiCo Inc. unveiled an odd set of results. Growth in unit sales, it said, was essentially zero in North America. Revenue rose, though, driven by the double-digit price increases Pepsi slapped on its snacks.

Then, one after another, major consumer companies came out with earnings that mimicked the Pepsi numbers: Clorox, Conagra Brands, and   Kraft Heinz. The details were different in each case—some reported sharp volume declines, and others came in unchanged—but the broad trend was crystal clear: Output growth is dead, prices have been jacked up, and revenue is, as a result, rising moderately.

Yep. Raising prices, but not output. Bloomberg had a great little graphic to illustrate this 👇

And the consumer's still consuming. Just whack it on the credit card or take out a loan... 👇

And how are workers keeping pace with inflation? By changing jobs!

Companies are being forced to increase wages to head off competition, attract new workers, or simply try to keep their existing workers happy and motivated.

Is any of this being prevented now by central bank actions? I'd argue no (or at least, not yet). Even though inflation expectations are supposedly 'well-anchored', that's not how people are behaving right now...

Perhaps the greater risk is that this becomes the norm if they don't act?

These kind of inflation dynamics can be self-reinforcing for a lot longer than anyone would be comfortable with. From a central bank perspective, the costs of doing nothing could be far worse over time.

Ultimately, the job of the central bank is to try and trim the excesses of demand, and slow the economy enough to try and prevent this dynamic from really taking hold.

Essentially, they're buying time for supply to catch up with demand, doing their bit to bring the two back into balance.

The politics also demand that somebody does something.

Rate hikes are the least bad option under the circumstances. Are they the best option? Absolutely not. It's unlikely that any central bank will ever act at just the right time, or correctly predict the future and act accordingly. This is a great example 👇

This from Ben Broadbent at last week's Bank of England press conference is the clearest statement I've seen of why it's wrong to say BoE could've prevented the cost of living crisis- i.e would've needed to raise rates in 2020 (mad) by enough to generate huge recession (v.unpopular)

It's always easy to re-write history after the event.

Summing up, central banks are hiking to cure supply-driven inflation because it's the expected response to (at least try) and dampen the high inflation dynamics. Politics demands that something must be done or the plebes will get restless, and doing nothing would probably be worse.

Yes it's sub-optimal. But when was the last time any institution delivered anything close to optimal?

🔔 Learning To Love The Grind

"I struggle turning all the research into good trades. Could you offer some advice?"

We're not wired for easy things. Success is something that must be earnt.