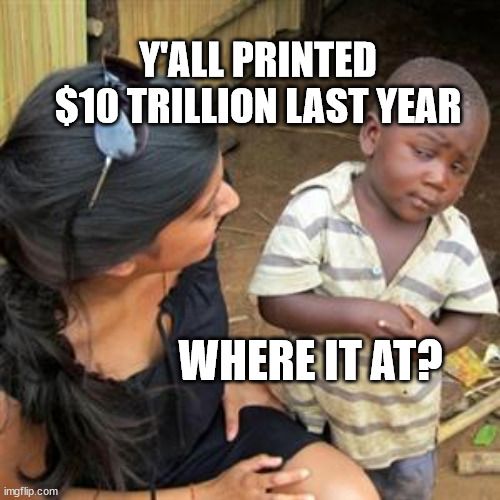 🔔 Where Did The Money Go?

Today we're going to take on a challenge.

The whole money-printing thing still really confuses people, which leads to comments like this & worries about inflation. 👇

"I find it hard to ignore how or where the trillions will flow to, that was gushed in recently"

The truth? It's kind of boring.

Especially compared to the colourful story of some infinite magical waterfall of freshly-printed money cascading into every corner of the economy, inflating everything it touches along the way.

The challenge: Explain it simply enough that you won't fall asleep reading it, while still keeping it roughly accurate.

Let's start with how it was created, and then we'll get to where it went...

Central banks 'printed' a whole load of money in the pandemic.
Something like this 👇

So now, there's like, $10 trillion sloshing around the global economy that wasn't there before, guys! And people are all...

"OF COURSE WE HAVE INFLATION, DOES NOBODY REMEMBER WHAT FAMOUS ECONOMIST MILTON KEYNES SAID?!"

But Milton Friedman was only half right. Inflation isn't always and everywhere a monetary phenomenon.

Still, let's quickly address the inflation elephant in the room. The basic theory of "too much money chasing too few goods" is correct.

But it misses out the time element. All of the money isn't chasing goods (or services) at the same time.

The US ran that test with the stimmiez, and can now confirm the shock result.

If you give people free money, they'll spend it.

If you give money to everyone at the same time, guess what happens.

They'll all try and spend it at the same time.

But that isn't what usually happens. As we explained here 👇

This immediate transfer of 'cash' into consumer pockets via ready to spend stimulus payments is the type of money printing that can prove inflationary (and it did).

It's unlikely to be repeated at such a scale and isn't typically how QE works.

This will be relevant for 'where the money went' later.

Right. If we want to understand 'money-printing', it's best to drop any prior attachment to the meaning of money completely.

Money is NOT for buying and selling things

OK, actually... that's not quite right. That's the purpose (or utility) of money at the consumer level. It's what we USE to buy and sell things.

That's the 'money' everyone sees, but not what it IS at a systemic level.

Peek behind the curtain and money is first and foremost... (drum roll please)

I already regret starting this.

So, where does this 'money' (in the form of QE) come from?

This graphic gives an idea of how it works.

But that's just an idea.

Think about how this works in reality.

It came from the same system they're now going to spend it back into.

No 'new' money has been created.

It's just been transformed and moved from one place to another before being transformed back again.

Starts out as water (cash), gets frozen (bonds), and then melted back into cash (water).

That's why they call it liquidity*.

*Fact Check: This is False.

Hopefully you get the idea though. Transformation, not creation.

What About the Fed?

PELLEY: Fair to say you simply flooded the system with money?

POWELL: Yes. We did. That's another way to think about it. We did.

PELLEY: Where does it come from? Do you just print it?

But that doesn't 'create' money exactly. It's the transformation process again.
The Fed swapped bonds (and MBS) for cash.

Presuming all of those bonds were already owned, someone had already swapped them for cash when they bought them. It's basically like taking it back to the shop and getting a refund. The ones that weren't 'pre-owned' are a different matter, but that's a tangent too far.

The point to focus on is that this process of 'money-printing' isn't really accurate. It's more like a giant swap-shop within a massive accounting system.

Well, it didn't exactly GO anywhere. It just moved around the system.

Starting from the US government distributing it like this... 👇

Some of that was immediately sent to people, and we already know what happens when people get free money... They spend it.

Where does spent money go? Into company revenues!

And those companies pay higher wages from those higher revenues... 👇

But it's not all one-way traffic. What's given with one hand is taken away with another. The tax man cometh...

Surging federal tax revenue in April led to the largest monthly budget surplus on record and a dramatically lower deficit through the first seven months of the fiscal year, according to Congressional Budget Office estimates released Monday.

That's $864 billion right out of the system, yet nobody's asking where that money went...

Because the government will spend it right back in to the system again later.

The real takeaway is that the economy is an infinitely complex ecosystem that can't be broken down into something as simplistic as money printing.

Where did all the money go? is the wrong question to ask. It's unanswerable, because money is constantly moving, (or not moving) within the economy.

Oh, and you know what happens when you pay off a loan?

You destroy money. It literally disappears. You want there to be less money in the economy for your children? How selfish... 😉😜

This is how it works 👇

Want to really boggle your mind?

How did the US housing market increase by almost $10 trillion during the pandemic if the Fed only 'printed' $5 trillion...?

And $2 trillion is being parked back at the Fed overnight because it has nowhere else to go...

If you've stayed awake this long, well done. It's boring, but money-printing isn't what you've been told it is, nor is it the only thing necessary to cause inflation.

New home sales freaked everyone out, but this is EXACTLY what the Fed wants. September pivot?

If easy money leads to bull markets... And economic fears and social unrest lead to easy money... Are you thinking what we're thinking?