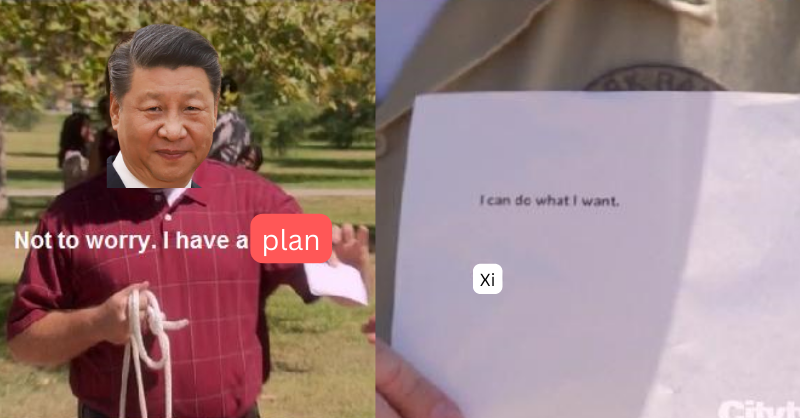 🔔 When Will China's Economy Overtake The US?

People love to ask when China will overtake the US. Please stop. Seriously, it's never going to happen...

OK. Never say never (Mr Bond) but it's sooooo unlikely. And that's been reinforced once again by China's latest congress event, plus a few other things still rumbling along in the background.

Let's quickly recap. China's growth model has been based on the principles of Grow Baby Grow, build it and they will come type policies.

It didn't matter if the investments were truly productive or not. It all added to GDP, so these policy choices served China well for thirty odd years.

However, the law of diminishing returns kicked in over the past decade, when China's debt expanded significantly without driving productive growth.

Now, their economy is drastically slowing. Western companies are pulling back amid geopolitical tensions, and frankly, many of the benefits of cheap Chinese labour and production are in the rear-view mirror. 👇

This doesn't mean the end of all Western production in China. For example, BMW recently decided to move production of the electric Mini to China...

Relatively speaking though, China isn't the obvious choice it once was.

The 20th Communist party congress got underway yesterday. The financial world waited with baited breath for Xi's big plan, maybe an end to Covid Zero (reportedly a factor in Apple deciding to move more production to India), and the grand vision for the future.

Xi's speech was just more of the same...

“In responding to the sudden attack of Covid-19, we put the people and their lives above all else and tenaciously pursued a dynamic Zero Covid policy. We have protected the people's health and safety to the greatest extent possible and made tremendously encouraging achievements in both epidemic response and economic and social development.”

Which is sure to weigh on any economic progress until it's abandoned. However, Xi did say that the economy (for all) is a top priority. 👇

“We will steadfastly push for common prosperity. We will improve the system of income distribution. We will ensure more pay for more work and encourage people to achieve prosperity through hard work.
We will promote equality of opportunity, increase the income of low income earners and expand the size of the middle income group.
We will keep income distribution and the means of accumulating wealth well regulated (and) intensify efforts to create jobs,”

Not so much focus on growth, more on redistribution... Hard to achieve when wealth is being destroyed (property bubble bursting, tech company share prices plunging). Still, the focus is on quality rather than quantity now 👇

“We will focus on national strategic needs, gather strength to carry out indigenous and leading scientific and technological research, and resolutely win the battle in key core technologies.”

However, what they say and what they do are often different. Policymakers the world over all suffer with constraints. Speeches serve to lay out an ideal, but the real world tends to get in the way.

Like how do you give a speech on high quality growth while also promoting an 'ethos of frugality throughout society'?

Given the fiscal picture, there might not be much choice on that score... 👇

Among the many issues, government incomes could be significantly reduced to balance the huge fiscal shortfall... 👇

"My annual income was slashed by 27% to around 80,000 yuan last year, due to the very heavy local fiscal burden," an employee surnamed Gao at a government agency in Chongqing told Reuters.

"Our leaders were very anxious these days as they said the current fiscal allocation is not enough at all. As there is no way out, they have had to ask the local government fiscal department for money."

Around 380 billion yuan (approx. 53 billion $US) of onshore LGFV bonds from economically weaker provinces are due for repayment in the next 12 months, according to a Moody's report in August.

All of which is happening at a time of huge friction between China and the US/EU.

Even though the implications of this thread on US sanctions may be a little exaggerated... 👇

The point shouldn't be dismissed without examination. The trend of turning away from China has been clear for some time in the US, and the huge CHIPS bill to spur re-shoring of critical manufacturing was a significant landmark.

Now,  the EU's own foreign service is recommending that the union throws in the towel on co-operation with China too. 👇

The EU should work more closely with the US, strengthen its cyber and hybrid threat defences, diversify its supply chains away from China and deepen ties with other Indo-Pacific powers, according to a paper prepared for member states by the bloc’s foreign service.
“China has become an even stronger global competitor for the EU, the US and other like-minded partners,” says the paper, seen by the Financial Times.

“It is therefore essential to assess how best to respond to current and foreseeable challenges.” These, the paper says, are likely to “widen the divergence between China’s and our own political choices and positions”. The assessment “admits that China is not going to change”, said a senior EU official. “In short, moving to a logic of all-out competition, economically but also politically.”

One of the points cited was China's attitude to human rights in the Hong Kong takeover, which along with Covid Zero policy and travel restrictions has led to something of an exodus...

Which Hong Kong hopes to reverse with policy changes...

It's nearly impossible to see a positive future. China, just like the West, is likely to pay the price for years of poor policies that presumed the piper would never ask to be paid.

Q: Which bond yields are rising? A: All of them

If you have been reading and watching UK media recently, you're probably quite aware of the furore surrounding what the BoE has been up to in apparent response to the mini-budget shenanigans of the new Tory government.