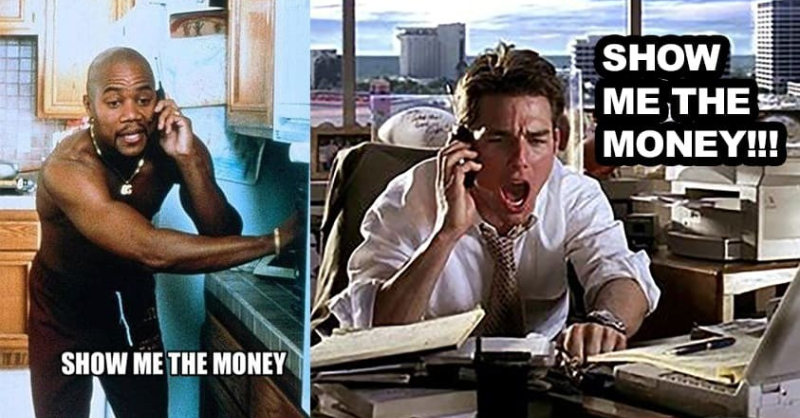 Money. Everyone chases around like headless chickens to get more of it. Nobody stops to think what it really is.

I'm entirely unconvinced by crypto and MMT as the all-encompassing solutions they present themselves as. But I do love how they've driven debates about what money is, what it's used for, and its role in society more into the mainstream.

Anyone who's spent time thinking about this stuff (and yes I'm guilty... way too much time) comes to realise that money isn't what they originally assumed.

And if you haven't thought about it, this is definitely worth a read. It's one of the best summaries I've come across... 👇

Most people can agree on this definition 👇

That's what it's supposed to be at least. The store of value part's under stress at the moment with inflation eating away at it, but it's a good model to start from.

There's a history of money that we're led to believe. It was created to solve a problem.

If the chicken farmer wanted to buy wheat, but the wheat farmer already had all the chickens he needed, trade was impossible. Money was supposedly created by the people as a solution to these difficulties of barter and trade...

But this history is disputed.

If money comes from the people, then taxes represent an incursion upon the people by governments, who impinge upon the private space of consensual, bottom-up trading activity with a top-down disruption.

But this isn’t a history, it’s a folk-tale. A legend. A fantasy.

There’s no indication that coin money ever emerged spontaneously from the difficulty of arriving at confluences of needs. Rather, the historical record shows us that money is a top-down phenomenon, rooted in the needs and capabilities of states.

Now, I absolutely hate the rich-bashing. There's a big part of me that thinks you've done a lot of things right if you get to be super-rich (obviously doesn't include the fraudsters and white-collar thieves). Wealth can be taken from the rich at any time, either by force or competition.

Getting rich, staying rich and the path to achieving that wealth deserves a lot more study and respect than the usual assumptions of bad man (it's always the men) do bad things, very evil, get rich.

What if the government were the evil ones...? And the multi-millionaires and billionaires are the heroes who've defeated their oppressive system?

Here's the story of how money came to exist, according to Debt 👇

As imperial armies went a-conquering, they needed some way to provision the soldiers garrisoned in their far-flung territories.

The solution was elegant — and terrible. Soldiers were paid in coin, minted and controlled by the state, which punished counterfeiters with the most terrible torments. Conquered farmers were taxed in coin, on penalty of violence and expropriation.

Thus: the soldiers had coin and the farmers needed it. This meant that farmers would be willing to trade their produce for coin, which meant that soldiers would be provisioned. Tax-bills were nondiscretionary liabilities: failure to pay your tax would lead to violence and ruin.

The value of money, then, came from taxation — from the fact that farmers needed coins. This need rippled out through society: even if you didn’t farm, you would accept coins in exchange for your own labor and goods, because the farmers would accept coins in exchange for food (which everyone needs), because farmers needed coin to settle their tax-debts.

Coins became money because there was a nondiscretionary, terrible obligation that you could only fulfill with coins.

The British used a similar tactic when the old Empire was expanding into Africa, imposing a hut tax on the locals that could only be paid in shillings.

It's a depressing way to think of money, but that's really all it's used for.
Paying obligations. Either to the government (in the form of taxes), or to others in exchange for goods and services.

That’s why we call it “revenue” (from a Latin root meaning “return”). Money is issued by states so they can make you do work, and when you pay your tax, you return your money to the place it came from.

I don't entirely agree with the idea that the state/government thinks this way in the modern era. Society pushes us towards work regardless though, so maybe there's not much difference anyway...

Markets price on the margin Marginal changes can (and do) affect where prices head next.

The bond market is 'screaming', curves are inverting, but all's calm in credit markets.