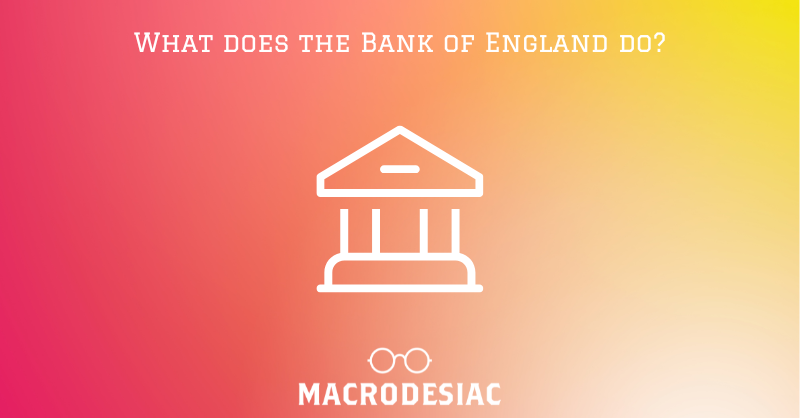 What does the Bank of England do?

Probably very few people recognise what the Bank of England does or even what it is!

Founded in 1694, the Bank of England is the United Kingdom's central bank and is responsible for setting the monetary policy of England, Scotland, Northern Ireland and Wales.

It's made up of 9 members who spend a few days discussing and voting on the correct monetary policy to be put forward at their next announcement, which occurs eight times per year.

But alongside the Federal Reserve, the European Central Bank, the Bank of Japan and all the others...

What does the Bank of England and other central banks do?

The Bank of England sets the rate of interest at which commercial banks borrow from the Bank of England, which then in turn decides how cheap or expensive it is for consumers and businesses in the economy to borrow money.

Effectively, then the Bank of England controls the credit and money supply in the UK's economy.

It does this for a few reasons.

Firstly, the Bank of England wants to maintain price stability (keep inflation stable) and one of the ways it can do this is by affecting the exchange rate of the pound.

Secondly, it wants to ensure that financial stability is maintained.

The Federal Reserve, the central bank of the USA, has a slightly wider objective set, in that it also wants to ensure full employment goals are met, while keeping a narrower target of inflation being maintained at 2% vs the Bank of England's target of 2% +/- 1%.

Let's use the example of the Federal Reserve, since they are the most important central bank globally.

How do they actually come up with their decisions?

The President of the Federal Reserve Bank of New York always has a seat, whilst the remaining four voting members have one President who rotates in each group (there are four groups) for one year each.

The groups are Boston, Philadelphia, and Richmond; Cleveland and Chicago; Atlanta, St. Louis, and Dallas; and Minneapolis, Kansas City, and San Francisco.

These are the current board members.

By law, the FOMC must meet at least four times per year, but it has been more frequent in the post-Great Financial Crisis world, with meetings occurring roughly double that as monetary policy has had to be more closely monitored and adjusted.

The voting members propose their forecasts to each other and essentially decide on where to set the Federal Funds rate, a target range of interest that banks charge one another for short term loans.

Once the decision is agreed upon (some members may dissent, but for a policy to go through, there simply has to be a majority), they then send the instruction to the New York Fed's desk to conduct the agreed upon Open Market Operation which involves the buying and selling of securities to achieve the desired goal.

These are price stability and maximum employment, as well as financial stability.

Following off of this dual mandate are other longer term goals.

👉 Here is the Fed's revised statement on their longer term strategy 👈

This statement is quite key.

The Committee seeks to explain its monetary policy decisions to the public as clearly as possible.

I don't think that's true, otherwise I wouldn't be writing this article!

Here's a Twitter thread we wrote, critiquing the belief from central bankers that their actions are understood by the public.

Over the last two years, however, you might argue that the Federal Reserve and Bank of England haven't kept financial stability since the cost of housing and other asset prices have increased so much.

This is largely because they followed a policy of low interest rates and quantitative easing to ensure the economy was liquid enough when the pandemic struck, and also so that stocks wouldn't crash further, which is partly why the Plunge Protection Team exists.

Why do low interest rates cause asset prices to increase?

If the rate of interest is decreasing, you end up paying less to borrow.

Central bankers believe that to stimulate an economy during a downturn, the right policy shift is to reduce interest rates and to increase the liquidity in the economy by allowing credit to flow easier.

This is done also through something known as quantitative easing (only when interest rates get very low), one tool in their open market operations that they can utilise to try to get the economy going again.

There are issues with the belief that money printing leads to inflation, however.

By increasing or decreasing the amount of credit in an economy, they believe they are able to influence CPI inflation - an increase or decrease in the price level based on a basket of goods.

The piece linked above would explain why there are issues with this premise.

Central bankers work on the premise that inflation should be kept at a target.

For the Bank of England, that target is 2% +/- 1% and for the Federal Reserve, the target rate of inflation is 2%.

But when a measure becomes a target, it ceases to become a good measure!

Let's take a look at what central bankers are probably looking at to explain their decisions to lower rates.

This is a supply and demand diagram showing the relationship between economic goods and liquidity preferences.

As there is an increase in the money supply (LM shifts outwards), it is assumed that interest rates will fall and national income will increase.

Whilst this may be true, there comes a time when doing this will create issues.

As we approach zero percent on the nominal rate (otherwise known as the zero lower bound), we find that central banks run out of options.

They then are forced to turn to using greater powers (such as quantitative easing) since consumers enter what is known as the liquidity trap.

What is the liquidity trap?

The liquidity trap is where low interest rates mean that people hoard cash as savings, rather than purchasing bonds, based on the belief that interest rates will rise soon.

We can look to the personal savings rate of Japan to see this in action.

Japan's interest rate has been negative since 2016, whilst their inflation rate has also remained stagnant.

This comes even though the Bank of Japan have expanded the money supply dramatically and used even more unconventional methods than other central banks to attempt to increase inflation to be able to increase the rate of interest and see some normality.

An example of their more than unconventional methods of increasing LM is by buying domestic exchange traded funds, of which the Bank of Japan is now the largest owner of at over 80%.

Something else that central banks do not factor in is how the consumer will respond to an increase in asset prices through borrowing being made 'cheaper', and their assessment of the liquidity trap is rather incorrect.

If the cost of buying a house or renting increases, then consumers will be able to spend less in the economy, keeping a cap on CPI inflation.

And this is bad for the economy for more reasons than the central bank's policy not meeting its inflation objective.

Why are low interest rates bad for the economy?

Low interest rates are bad for the economy mainly because they contribute to misallocation of capital, which leads to lack of productivity growth.

Since low rates (and negative real rates especially) are so easy to obtain, especially in Europe, we have a situation where you're just feeding something that should really be dead.

In Europe, firms are less likely to go to capital markets for funding versus the US.

Instead, they go to banks.

And banks make money from loans.

If they can provide loans to firms that can repay, who cares if those firms aren't actually able to improve?

The problem is that wages don't increase - there is likely little net benefit to the wider economy other than staving off the inevitable, such as when a tail risk event like the response to the Corona virus happens.

S&P sees European corporate default rates spiking to 8.5% from 3.5% in the back end of this year...Alexandra Dimitrijevic, S&P’s Global Head of Research, said that with the number of firms on downgrade warnings at record levels -- 37% of the companies S&P rates and 30% of the banks -- and credit quality dropping, default rates are set to jump.

“One third of speculative-grade companies are rated B- or below in Europe, which is up 10 percentage points compared to before the (COVID) crisis. So that is why we expect the default rate to effectively double”.

Low rates lead to an adverse selection of who should really receive capital.

And this creates a certain doom loop whereby rubbish firms stay alive, not allowing the capital to flow to the innovative firms that can promote growth.

How do central banks increase the money supply?

Above, we mentioned that the New York Fed's desk undertakes Open Market Operations.

What does that mean?

Well, to increase the money supply, there has to be a mechanism by which the central banks can place the money they create into the economy, right?

They do this by purchasing Treasuries from primary dealers (commercial banks) which provides them with liquidity to then create loans and conduct business according to the demands of the consumer, which then increases the money supply... kind of.

Remember this article from above...

Again, the issue with this is that money is kept within the banking system, so the CPI measure remains largely unaffected - inflation increased after the pandemic for example, because money was provided directly to consumers.

They do this until the desired Fed Funds target range is achieved.

The problem is that this mechanism tends to create a stickiness in financial assets, rather than feeding down into the real economy...

'Stocks only go up' is born through this.

The New York Fed's trading desk can also do the opposite.

To send the Fed Funds rate higher, they sell Treasuries on the Open Market to reduce liquidity.

Since the Fed Funds range is the benchmark interest rate, this affects every other borrowing and lending rate out there, which is why it is such an important measure when looking at financial markets.

And since the dollar rules the market, analysis and trade ideas tend to start with the Fed and the US dollar.

Banks and research firms are publishing their 2023 outlooks. A soft landing and a strong US economy, or the S&P500 to 3,000 as company earnings take a big hit?

💵 Don't Just Do Something, Sit There

Trade less, trade better, defending the over-valuation in private equity and why the end is nigh for many EV startups