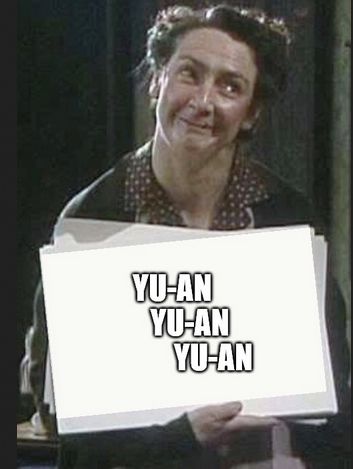 Check out Macrodesiac partner Syscoin and their 2022 Roadmap 👇

Ah. Will you have a weaker currency, Father?

👆  If you used to watch Father Ted (showing my age), you'll remember Mrs Doyle, always asking "will you have a cup of tea?", hassling the priests if they said no ("ah go on, go on").

That wouldn't seem to have much to do with anything, but my brain's just built different. Analysts are the Mrs Doyle's who've been asking if China will allow the Yuan to weaken for ages. Now it's starting, everyone's gone quiet...

Why is China's currency weakening now?

One explanation is yield differentials. Once upon a time, you could invest in Chinese bonds and earn a lovely premium vs US yields for doing so.
That isn't the case now 👇

Now, this could all wash out. Dollar strength is being driven by the Federal Reserve's hawkish tones and high inflation in the US.

But Bostic (non-voter) is already worrying about global growth and talking up the need to be "cautious".

If some of the 2022 Fed voters start to talk up those same concerns, maybe the markets begin to scale back those hike expectations, and weaken the dollar.

But that's only one side of the equation...

It was a controversial decision however...

The move was unexpected, and many believed it was a desperate attempt by China to boost exports in support of an economy that was growing at its slowest rate in decades.

However, the PBOC claimed that the devaluation was part of its reforms to move toward a more market-oriented economy.

The sudden shift sent a signal, and the yuan hasn't revisited the 6.20 level since.

And things don't really look too different now. China's economy is slowing, while global growth/demand is slowing too.

And for all the big promises of "common prosperity" or boosting domestic demand, nothing has really changed 👇

Back in August 2019, growth concerns were front and centre. The yuan was far weaker than it is now, trading above 7 per dollar. A weaker yuan was seen as a positive development for the Chinese economy by making their products cheaper for foreign buyers 👇

It might not be so abrupt, but there are plenty of reasons for the Chinese authorities not to push back too vigorously against a weaker Yuan.

It's a pretty chart. But it's not all about rate hikes. (And how many of those hikes are in the largest, most significant economies...?)

Nope, what matters most is Financial Conditions 👇

In developed economies, financial conditions are starting to tighten, although they remain relatively loose...

Let's see where we are in June, once the market has digested the Fed's decision in May & QT Light should be underway.

Netflix got absolutely obliterated again after earnings. I got this one waaaaay wrong. I thought the guidance last quarter was negative enough to mitigate a big downside surprise. 👇

Barring disaster, Netflix could easily bounce to $425 post-earnings but consumers tightening the purse strings in a slowing global economy could spell trouble down the road.

But it WAS a disaster. Netflix actually lost subscribers for the first time in a decade, projected even more subscriber losses in Q2 and refocused on an ad-supported tier and cracking down on password-sharing.

They even said that subscriber growth isn't the best way to judge progress now...

“As we work to monetize sharing, growth in ARM [average revenue per membership], revenue and viewing will become more important indicators of our success than membership growth.”

Some debate about what this means for the wider economy in the Macrodesiac discord...

Is this just the snapback of demand being pulled forward in the pandemic?

Now people can go out, it's inevitable that Netflix and other streaming services would lose their relative appeal.

Or is this a sign of households being squeezed and cutting back?

And Bloomberg's narrative machine tied it to strong economic data...

Fueling the rally has been string of unexpectedly sturdy economic data, undermining arguments that a recession is at hand.
Housing starts came in better than forecast, while other recent reports have given solace to bulls.
Hiring remains robust and applications for unemployment benefits are near historic lows.
High-frequency data show consumers are out in droves shopping and dining again.

Even as the IMF is downgrading global growth forecasts for the second time this year (it's only April).

The only thing that's certain is uncertainty.

However, there are some firms that seem to weather every storm. Apple is chief among them.

The most impressive thing about Apple? Profitability 👇

Even though people like to lump them together, there are huge differences between the FAANGs.

Something's Got To Give In USDJPY Trust The Bald Guy Twitter Takeover Technicalities Netflix Too Bearish Into Earnings?

Peaks are the theme du jour (French! And people say we're not cultured smh) | Even though Ackman's Netflix bet went wrong, he did the right thing...