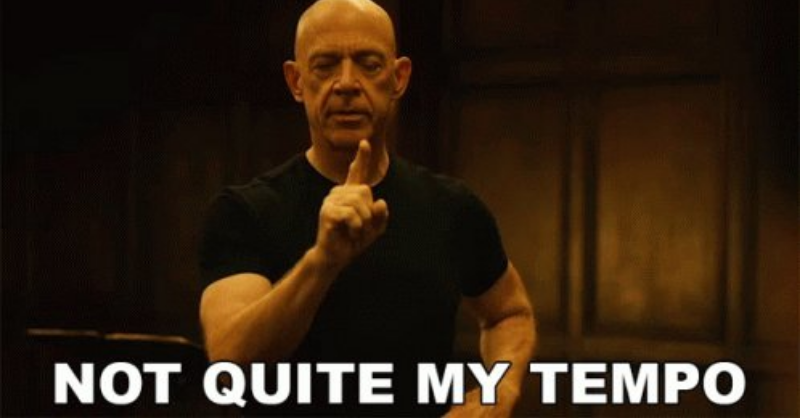 When different parts of the market move at different speeds, it's hard to get a handle on where we are in 'the cycle'. I've got a nagging sense of impending doom that I can't shift. I'll explain why.

The willingness to buy dips in risk is making me especially uneasy. Although it's clear that a lot of speculative air has come out of markets, is there going to be an 'equal and opposite' reaction to the mania of the past two years?

One barometer we like to use is the risk curve.

When risk appetite is high, there's zero appreciation for risk and the focus is on returns, which pushes up the price of risky assets (and lowers their potential future returns).

When risk appetite is low, there's zero appreciation for returns, and the focus is instead on risk (and not 'losing money'), which pushes down the price of risky assets (and increases their potential future returns)

Howard Marks' put forward the idea that the higher the risk, the greater the variance we should expect around the outcomes.

It's a good framework. But even this model has flaws. The safest assets (government bonds) have been extremely volatile this year.

The bond market will probably settle down again in coming months.

“We are pretty stretched in terms of volatility and it’s hard to keep it that way once more supersized Fed hikes get delivered” in the next three meetings and as the economy slows and inflation eases, said George Goncalves, head of US macro strategy at MUFG in New York. “This is the most ambiguous point of the business and rate-policy cycle.”

Nevertheless, it shows how nothing can be taken for granted in the world of risk. Everything's relative.

So, there's plenty of volatility around. How's risk appetite looking?

Let's take a look at Calpers in the context of our risk barometer. The California Public Employees’ Retirement System is the largest pension fund in the US, with roughly $440 billion under management.

The hunt for yield is at the heart of this.

Capital must be deployed, returns must be generated.

And with government/corporate bond yields historically low, they're simply not attractive assets to hold. 👇

Which means pension funds are being forced to move further out on the risk curve, away from traditionally safer investments and into 'alternative assets'...

The trustees also voted to increase riskier alternative investments, raising private-equity holdings to 13% from 8% and adding a 5% allocation to private debt.

Eight months later, we get this headline... 👇

Ah, have they seen the error of their ways and recognised that they need to turn more defensive in a deteriorating risk environment?

The California Public Employees’ Retirement System sold about $6 billion of its stakes in private equity funds to second-hand buyers, severing ties with a slew of past managers and freeing up cash for new wagers.

She has told Calpers directors that she wants to build a team that would buy stakes in private companies. That would let Calpers gain more control and bypass private equity firms like Blackstone Inc. or Carlyle Group Inc.

Just a little restructuring so we can get back in the game guys! There are still opportunities out there!

What does that say about risk appetite? Despite Calpers shrinking from $495 billion to $440 billion in 8 short months, they still want to get their risk on...
And do it in the riskiest section of the market!

It just doesn't seem like there's been enough pain, enough destruction, or enough 'blood on the streets' as Buffett would say.

From a retail trader's perspective, a lot of speculation has already been washed out, but there's likely more to come.

Gamestop was the latest domino to tumble, announcing a 4 for 1 stock split on Wednesday (shares rallied 15%) before firing CFO Michael Recupero (ironic surname) the next day, and announcing layoffs of "a number of" employees as the firm seeks "sustained profitability,".

Pro Tip: Start with the profitability and work your way up. Details here 👇

Crypto's worth less than a third of what it was and ARKK dropped like a stone.

But even as tech stocks were obliterated, ARKK saw $1.5 billion of inflows during the first half of 2022...

And there's definite dip-buying. Will it really be this easy?

I know that this is a cycle like no other, but I just don't see the widespread depressed sentiment that typically marks a 'bottom' in risk appetite.

Not even close to it.

Central bankers are trying to manage the situation and talking out of both sides of their mouths.

Two Fed hawks were speaking yesterday. Waller and Bullard both confirmed their rush to to get rates up, with Bullard still fixated on 3.5% by the end of the year.

Then he talked about cutting rates again next year. Waller even added that the zero lower bound issue could return.

Guiding markets towards rate cuts next year (and maybe back to zero beyond that) when they only started hiking four months ago is an 'interesting' strategy...

"We Are Still So Early"

The Fed minutes are ancient history, France aren't taking their debt seriously, and the UK's rate hikes with no economic growth.

The 'easy' trade from the lows is done. Now we're 'on the verge of a bull market' Is a stimulus promise enough to take Chinese stocks higher from here?