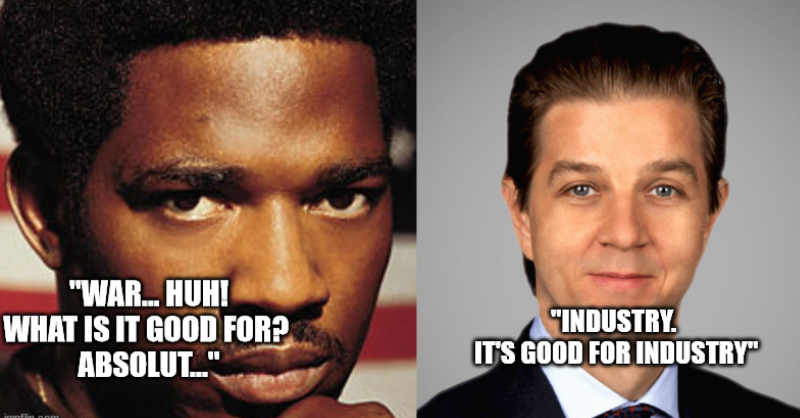 Zoltan's back again. In the old days he was known for his takes on monetary plumbing. He's now completed the rebrand to Big Picture Macro Guy, and his latest piece makes for interesting reading.

I don't agree with a lot of it, but it's interesting and thought-provoking. Can't ask for much more than that... Let's dive in 👇

Wars cannot be fought with supply chains that crisscross a globalized world, where production happens on faraway, little islands in the South China Sea, from where chips can be transported only if airspaces and straits remain open…

Global supply chains work only in peacetime, but not when the world is at war, be it a hot war or an economic war. The low inflation world had three pillars: cheap immigrant labor keeping nominal wage growth “stagnant” in the U.S., cheap Chinese goods raising real wages amid stagnant nominal wages, and cheap Russian natural gas fueling German industry and Europe more broadly.

Implicit in this “trinity” were two giant geo-strategic and geo-economic blocks: Niall Ferguson called the first one “Chimerica”.
I will call the other one “Eurussia”.

No issues with this. The general premise is that everyone was engaged in mutually beneficial trade: China sells cheap goods to the US, Russia sells cheap gas to Europe, and any excess earnings get invested back into G7 countries.

But now, Zoltan says the trust is gone, there's no way back. Neither of those relationships work anymore. It's over.

Russia and China are now allies uniting against the West. 👇

Zoltan talks about this in terms of divorce, which brings back painful memories of the Brexit doom-mongering.

I have absolutely no problem with anyone pointing out that the old models, or the old ways of doing things no longer work for the parties involved, but that doesn't mean the entire relationship folds.

Exactly as we've seen so far with Brexit, it complicates things, but there's still a trading relationship.

Yes, you can definitely argue that the ideological differences at stake are far wider between East & West than they are between Britain and the EU. But that doesn't have to mean a complete (or sudden) breakup.

Old habits die hard, and between nations, trade is the ultimate barometer...

Don't forget that even as the war continues, Russian gas is still flowing through Ukraine, and Russia is still paying the transit fees... 👇

The main point is that these tensions are nothing new, and while there are ideological reasons for separating, ideology doesn't usually win. 👇

Today, we are witnessing the implosion of the long-intermediation chains of the globalized world order: masks, baby formula, chips, missiles, and artillery shells, for now.

The triggers aren’t a lack of liquidity and capital in the banking and shadow banking systems, but a lack of inventory and protection in the globalized production system, in which we design at home and manage from home, but source, produce, and ship everything from abroad, where commodities, factories, and fleets of ships are dominated by states – Russia and China – that are in conflict with the West.

The systemic event is someone challenging the hegemon, and today, Russia and China are challenging the U.S. hegemon. For the current world order and its trade arrangements and network of global supply chains to survive the challenge, the challenge must be squashed quickly and decisively, in the spirit of the Powell Doctrine.

Again, I don't necessarily agree with all of this.

Top Gun 2 was very similar to Top Gun in a lot of ways...

Seriously, it's the premise of the hegemon challenge I can't get my head around. See, I don't think anyone really wants the job. The tensions are more derived from the relationships not working like they used to rather than a quest for ultimate power.

That doesn't mean tantrums and walking away from the game altogether. It means negotiating new and mutually beneficial terms of trade, which will take years...

And these things cycle too. Iran & Venezuela were out of the US trade loop, now they might be coming back in... Is Russia really going to be frozen out forever?

Plus China's economic model is completely broken. It seems that a new US company is shifting some aspect of production to Vietnam or India every day. From both the economic and the geopolitical perspective it makes sense for them to do so.

For China, the drifting economy is a problem. Graduates can't get jobs, youth unemployment's above 20% and consumption is snail-paced. Will China really try to become a global hegemon from such a position of weakness?

Nonetheless, the West has noted their own vulnerabilities. They can't take global trade for granted. Those over-reliances need correcting...

It's already started, and will likely continue as Zoltan notes. 👇

We’ll also have to progress by building, and that’s where industrial policy comes in: as an investor, you care about the inflationary consequences of Russia and China challenging the U.S. hegemon. Where inflation goes, policy rates go, or if not, financial repression is an issue. Either way, you care, especially if you are a bond house or if you depend on fixed income.

These are the scary times when the “euthanasia of the rentier” is a risk. To ensure that the West wins the economic war – to overcome the risks posed by “our commodities, your problem”; “chips from our backyard, your problem”; and “our straits, your problem” – the West will have to pour trillions into four types of projects starting “yesterday”:

(2) re-shore (to get around blockades)

How far the pendulum needs to swing away from globalisation and back towards sovereign nations is still up for debate. Nevertheless, this is a good read and lays out clearly the risks to be aware of if relations deteriorate further... 👇

All eyes are on Powell for Jackson Hole. Will they go 50 or 75? So EXCITING! Except there's a far bigger game unfolding...