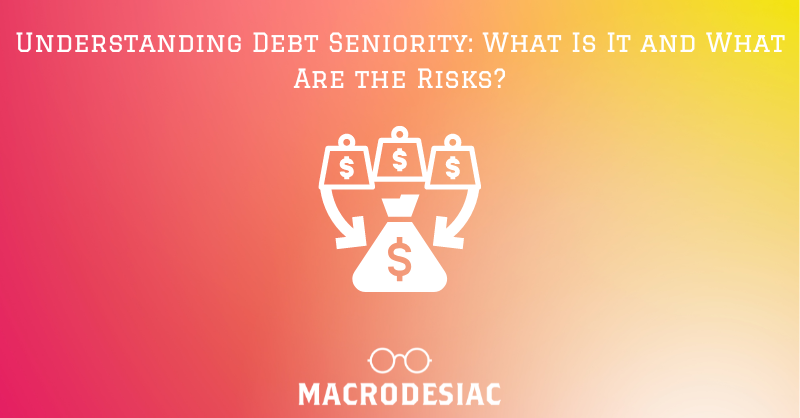 Understanding Debt Seniority: What Is It and What Are the Risks?

What is senior debt?

Senior debt is a type of debt that has a higher priority than other types of debt. It is usually secured by a collateral and has an established claim in the event of default.

Senior debt holders receive payments before other types of creditors and are entitled to repayment of the full amount of their debt first. Senior debt typically carries a lower interest rate than other types of debt due to its increased security and priority in the repayment process.

What is junior debt?

Junior debt carries a higher interest rate than other types of debt due to its increased risk.

Equity holders are typically last in line when it comes to debt seniority. In the event of insolvency, the debt holders will be repaid first and then the equity holders will receive any remaining funds after all the debts have been repaid.

Equity holders typically receive the least priority when it comes to payments.

Junior debt carries a higher interest rate than senior debt due to the higher risk associated with it. Some examples of junior debt are subordinated debt, mezzanine debt, second lien debt, and convertible debt. Generally, the higher the risk, the higher the cost of the debt.

What happened during the GFC with regards to debt seniority?

The Global Financial Crisis of 2008 resulted in a significant number of defaults on debts across the globe. When it comes to defaults, senior debt holders were able to recoup the majority of their debt because they were first in line for repayment from the insolvent debtor. On the other hand, junior debt holders were not as lucky and had very little chance of recovering their debts. This led to many investors being wiped out as the recovery of the junior debt was a very small fraction of the original loan amount.

Mortgage-backed securities (MBS) are securities backed by a pool of mortgage loans. These securities are classified by seniority, with the most senior tranches being the first to receive principal and interest payments. The most senior tranches are also the least likely to be affected by defaults and delinquencies since they are first in line for repayment. As a result, they tend to be the least risky and highly sought after by investors. But during the GFC, many of these senior MBS’s still suffered significant losses as the housing market collapsed and many mortgages became delinquent. This was because the underlying mortgages had depreciated in value, and therefore the principal payments were not enough to cover the amount owed.

Does Senior debt have issues too?

Who are the largest holders of junior debt?

The largest holders of junior debt are typically institutional investors such as private equity firms, hedge funds, and mutual funds. These investors seek higher yields in exchange for the higher risk of investing in junior debt.

Ultimately, debt seniority is an important consideration for both companies and investors. It is important to understand the different types of debt and the risks associated with each in order to make an informed decision.

Real yields provide a clearer picture of the returns investors can expect from an investment. By stripping out the effects of inflation and removing any time-value distortion of money, real yields more accurately reflect the actual rate of return you will earn.

There are a million company metrics to study. What if none of them matter? Stock prices and valuations aren't determined by earnings...