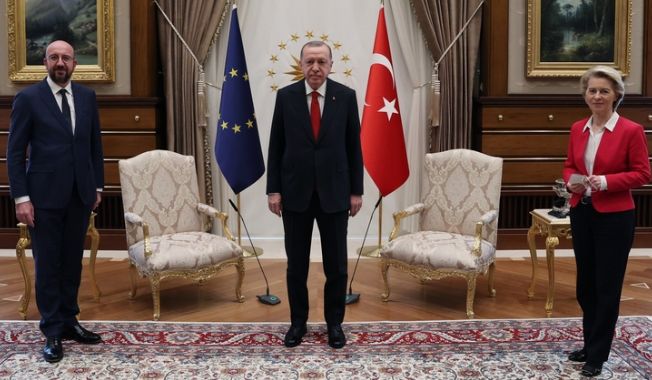 Putin: "Pay for your gas in rubles"

"Actually... Pay for EVERYTHING in rubles"

Moscow has not said when the currency change will take effect but it is expected to unveil its plans for rouble payments on Thursday.
Russia's top lawmaker warned on Wednesday that oil, grain, metals, fertiliser, coal and timber exports could also soon be priced the same way.

This statement has already been walked back by the Kremlin. The transition to gas payment in rubles will "take time".

"It's not like it's delivered tomorrow and must be paid for [immediately in rubles]. It spans a longer period for purely technological reasons,"

While it's unlikely that Russia will be able to force payment in the ruble, it's clear that there's no going back to Russian energy dependence...

So, Europe's pretty screwed on the gas front.

Germany's preparing for supply disruptions, and the Dutch definitely aren't panicking at all because there's definitely not a crisis... 👇

Where's Europe going to get the gas?

You can't just drill a hole in the ground and hope for the best. There's work to be done.

Time for some Macro Tourism! Let's start with where they currently get it. Saved this in my treasure trove last month. 👇

Looking at those numbers, the US is the most obvious supplier. The largest producers and a decent surplus to export. There are limits however. Liquefied Natural Gas (LNG) requires re-gasification which limits capacity.

Germany has signed the first contract for construction of an LNG terminal in Brunsbüttel, but the terminal will have a re-gasification capacity of just eight billion cubic meters (8 bcm), while German annual imports of Russian gas are estimated to be more than 70 bcm...

Which means more terminals will be needed. There's more US liquefaction projects in the pipeline (geddit?! Right, yeah. I'll see myself out) 👇

Broadly speaking, there's plenty of gas in the world. The problem is how to get it into Europe.

Turkey's geographical location could make it a key player 👇

Geographically, it's a proper gateway between Europe and the large energy producers of the Middle East. Erdogan may have even grander plans...

“Turkey has realized the greatest natural gas discovery in its history,” he said. “We are determined to solve our energy issue. We will not stop until we become a net exporter of energy.”

Turkey is ideally placed as an energy hub on the edge of Europe. Critics will rightly point out that substituting reliance on Putin for reliance on Erdogan isn't the brightest idea. However, Turkey could certainly play a role.

The idea, first conceived years ago, is to build a subsea pipeline from Turkey to Israel's largest offshore natural gas field, Leviathan. Gas would flow to Turkey and on to southern European neighbours looking to diversify away from Russia.

The politics of oil & gas pipelines are a complex web of allies, enemies and competing economic interests. The proposed Qatar-Turkey pipeline was a perfect example 👇

The Qatar-Turkey pipeline was a proposal to build a natural gas pipeline from the Iranian–Qatari South Pars/North Dome Gas-Condensate field towards Turkey, where it could connect with the Nabucco pipeline to supply European customers as well as Turkey.

One route to Turkey was via Saudi Arabia, Jordan, and Syria, and another was through Saudi Arabia, Kuwait and Iraq. Agence France-Presse claimed Syria's rationale for rejecting the Qatar proposal was "to protect the interests of [its] Russian ally, which is Europe's top supplier of natural gas."

The EastMed pipeline cancellation was welcomed by Turkey too.

The Armenia-Azerbaijan conflict was pivotal for Israel-Turkey relations. We covered the importance of the conflict for Macrodesiac Premium members here 👇

Crucially, the fighting found Israel & Turkey on the same side. Azerbaijan is a common ally, and the joint challenges led to to an improvement in previously strained relations. A pipeline could be "the prize"...

“The market logic to bring Israeli gas to Turkey for domestic use and export to Europe has existed for at least eight years and has not changed,” said Michael Tanchum, a fellow at the Middle East Institute in Washington.

“With events in Ukraine focusing a sense of urgency on natural gas, combined with Turkey's recent rapprochement efforts with Israel and other Middle Eastern actors, the previous political obstacles could be resolved."

And Turkey has an advantage over Egypt...

“With the Egyptian option, you have many costs, from carrying, stockpiling, liquefying and selling it to the spot markets with a much lower price,”

“But Turkey itself is a market with a growing energy need and it has several pipelines laid down to export it to Europe with a good price."

Turkey's growing energy influence and geopolitical relationships will be something to keep a close eye on as the energy map is redrawn.

History doesn't repeat, but it often rhymes Which really screws with people who think it'll repeat...

What if those transitory inflation calls were right, but early?