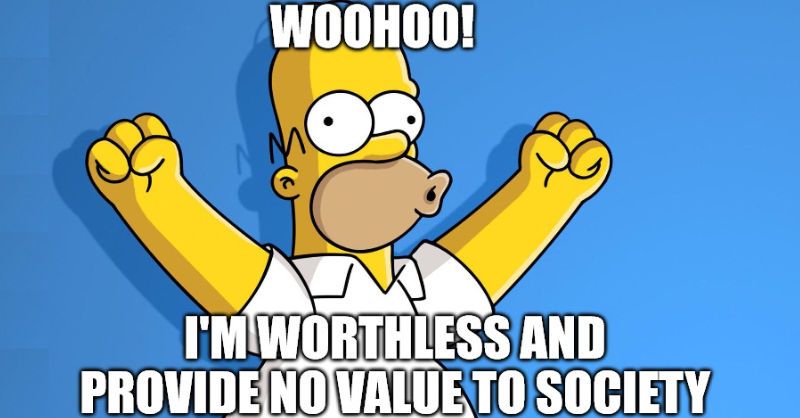 🔔 Traders Provide No Value To Society

"You offer no value to society, you're not producing anything of worth... What's the point of you?"

Apparently this is what my Grandfather told my Dad, his future son-in-law (and bond sales trader) when they first met. Got off to a great start...

It's not just traders that get beaten with the particular stick either. If you work in the finance industry, most people think your job is simply to profit by skimming a bit off the top (and bottom). In the worst cases, you're just a parasite feeding off the work of 0thers.

All of this negativity can generate a bit of an existential crisis. You produce nothing. And your education? Completely wasted! 👇

It's tempting to push back against these simplistic claims. But when you REALLY think about it, what value is a trader actually providing? It's hard to nail it down, and definitely not on the level of nurses and surgeons...

Price discovery and liquidity provision is a favourite line. Without traders to push prices to ridiculous levels, how would we know that the world is very short of energy and needs to invest...?

A price signal is information conveyed to consumers and producers, via the prices offered or requested for, and the amount requested or offered of a product or service, which provides a signal to increase or decrease quantity supplied or quantity demanded. It also provides potential business opportunities.

Why is it that traders get such a bad rap for seeking profit anyway?

Plenty of business models are built around the idea of buying something with the intention of reselling it for a higher price, usually by transforming it into something of greater utility, or by repackaging it so it appears to have more value.

Profit is the motivation for most of society's endeavours. And it's really nothing new. This excerpt is from Adam Smith's Wealth of Nations (1776) with some emphasis added. 👇

The commodity is then sold precisely for what it is worth, or for what it really costs the person who brings it to market; for though in common language what is called the prime cost of any commodity does not comprehend the profit of the person who is to sell it again, yet if he sells it at a price which does not allow him the ordinary rate of profit in his neighbourhood, he is evidently a loser by the trade; since by employing his stock in some other way he might have made that profit.

His profit, besides, is his revenue, the proper fund of his subsistence. As, while he is preparing and bringing the goods to market, he advances to his workmen their wages, or their subsistence; so he advances to himself, in the same manner, his own subsistence, which is generally suitable to the profit which he may reasonably expect from the sale of his goods.

Unless they yield him this profit, therefore, they do not repay him what they may very properly be said to have really cost him.

The complex chain of businesses that extracts commodities from the ground, transports them around the world and transforms them into everyday products is a modern miracle. All created by the pursuit of profit.

That doesn't really solve the social utility of trader speculation though...

Let's compare traders to footballers. Which provides more value to society?
What's this guy ever done for you? 👇

Then again, what's a trader ever done for you? 🤔

Footballers and most other sports stars provide entertainment for the masses, and they're very handy sponsorship vehicles for the companies that want to sell to those same masses...

There's only one answer I've ever been able to half settle on, and it has something in common with footballers...

The competitive pursuit of excellence. Competing to find that informational or contextual edge in the pursuit of profit. The more people pursue excellence, the more informed they are, and the more society benefits, right?

Not the most convincing argument, I admit...

Instead of price risk being concentrated in one section of society, or between two giants that society depends on (if one fails, everyone loses), risk is shared between thousands of participants, which should create a more resilient system...

Perhaps traders do offer some societal value after all. And if it's true that "risk can never be destroyed, only transferred", doesn't it make sense that the business of speculation is to distribute risks?

And if you think about the business in that way, would you still take the same trades?

Tempting as it is to just block them out and completely ignore politics, these chimps (we'll come to it) pass and block laws that can have enormous impacts on markets.

🔔 Learning To Love The Grind

"I struggle turning all the research into good trades. Could you offer some advice?"