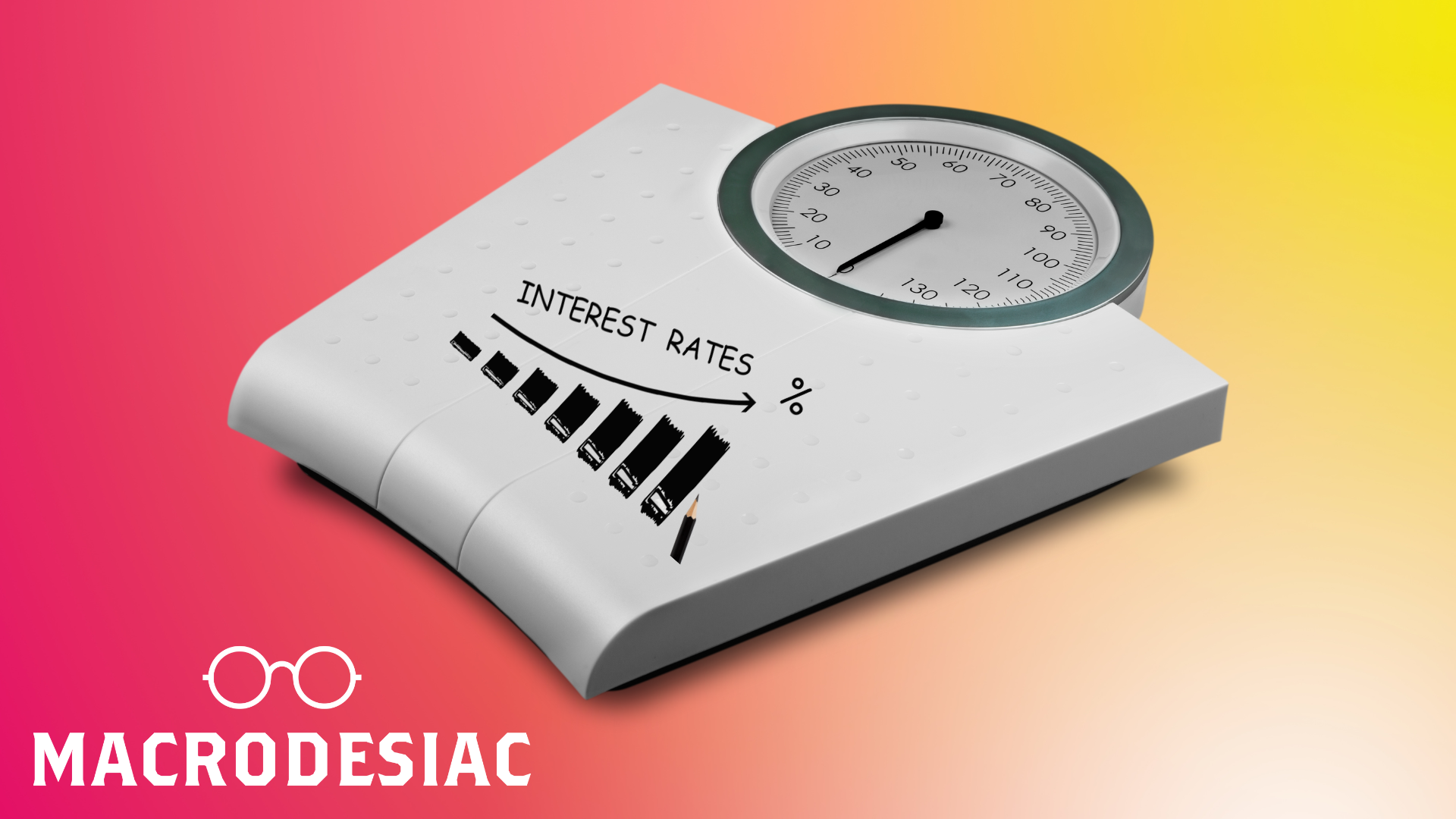 Interest rates are the stock market's weighing mechanism and when talking about stocks, we can replace 'interest rate' with the term, 'risk free rate.'

If you're able to understand the role the interest rate (risk free rate) plays in the economy and in stock markets then you are halfway to winning the battle of being able to construct winning ideas.

What is the definition of the risk free rate?

It is the base rate (interest rate) or the yield on a certain duration of government bond.

The real risk free rate is then the yield of the bond, minus the expected inflation rate over the bond's duration.

When it comes to how stocks are valued, the discounted cash flow model is one way that fundamental analysts value them and a big part of this is the risk free rate of return which means...

The risk free rate is important in understanding how stock move

Here's the model, and I have specifically highlighted 'r'.

Remember that algebra you learnt at school and thought you’d never use in the real world? You were right, it’s still useless. Don’t get PTSD when you see this though, it isn’t as complicated as it looks.

This isn't actually the interest rate; rather, it's the working average cost of capital (WACC), which is the risk free rate  + the default premium (the price an investor wants to receive for taking the risk of owning the stock as a function of its likelihood to default).

It is usually the 10 year bond yield because bonds are 'gilt edged' - in other words, the UK or US government is unlikely to default.

As interest rates increase, the risk free rate also increases, and as the denominator in the equation (the 'r') is becoming heavier, the numerator effectively becomes worth less.

This leads to a lower stock valuation.

What's funny is another kind of investor would come to the same outcome, but might interpret interest rates going higher as having a different mechanism, and perhaps a simpler one.

They might say 'well if I can buy a 10y bond at 5% yield (could be where they're headed soon!) and inflation expectations over the next 10 years are 2.5%, I can make a risk free 2.5% plus my principle back over 10 years. Why would I want to own this shitco?'

And that's how the tower starts falling and stock markets reprice themselves.

Firms that survive only on debt, without making any cash start to topple as their alternative valuation metrics are deemed far too unstable, and this is largely what has happened with many of the memestocks that reached their peak with all central banks going balls deep with monetary stimulus.

Another example of an investor perceiving how interest rates affect the market might be, 'shit, I have to pay extra on my mortgage. Can't invest as much now.'

Key to note here is that the power of interest rates lead to different interpretations (maybe) of a mechanism, but with the same outcome.

A higher risk free rate causes stocks to sell off

The risk free rate changing is the general reason behind why stocks tend to go up and down over longer cycles, but what's actually happening?

A lower risk free rate (interest rate) causes more people to buy - for every buyer there has to be a seller.

We are currently at a THIRD of the peak of the quantity on the bid & offer back in August 2021.

That means there is less participation across prices than there was back then.

These are just different ways to say that if a market is less liquid because the risk free rate is higher, there is less likelihood for it to go up.

Why do stock markets go up in the long term though?

If we zoom all the way out again though, there is a neat thing that happens in indices which have a lot of firms participating in them.

After electricity, the construction of the index is probably the greatest human achievement. I don't want to hear any arguments.

Over the long term, it always goes up.

And this isn't even the index with dividends reinvested...

Even if you were to hold through the 60s and 70s, with dividends reinvested, it's likely you still made money, even though the market was flat.

The simple reasoning for staying long a low cost US equities index is less a bet on the belief in the market, and more a belief on whether you are long humanity, peace, innovation and the brilliance of human desire constantly wanting better.

Even if you think the world isn't getting better, it is and has been for a while now.

If we take the pandemic, the world was seemingly on the same side, whether you agree or disagree with the processes and actions governments undertook.

The sheer fact they were largely doing the same things together showed that much is co-ordinated.

All the market is, is a weighing mechanism of what looks good relative to interest rates, and all that is occurring here is how assets are valued vs this measure.

All macro data and commentary is doing (or at least should be doing), is pointing to what interest rates on aggregate are headed.

You can have all the fancy data and theses you want, if the core of every argument is not focused on what is occurring to influence interest rates then you're off piste.

Sure, you can have cases where looking at specifics matter, especially in FX...

But even then, FX moves on yield differentials heavily, which again are affected by... interest rates.

Uptober played out at the index level, and a handful of single stocks soared above and beyond. The Veteran's spotted something that links them together...

I've always wondered about the relationship between FTX and Alameda, the entity that 'is but isn't' related to FTX.