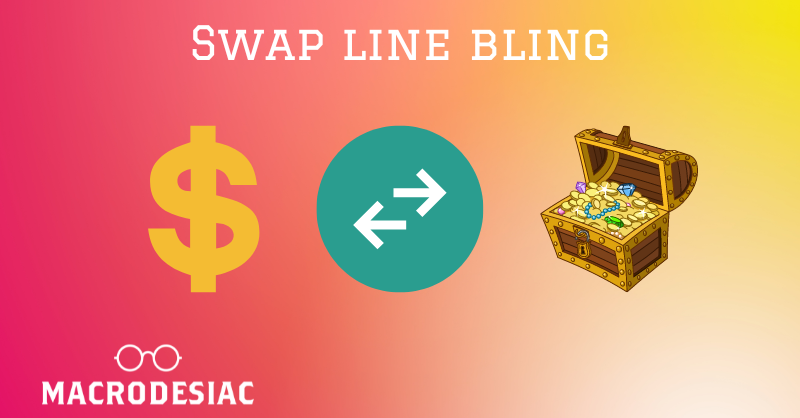 But the way the market is looking right now, there's a couple of pieces of evidence based on how events have gone down in the past that lead me to believe this is possible.

Now I've been mulling this for a week or two now, trying to figure out what the backdrop for it to happen needs to look like.

This is by no means a Monet style backdrop; no perfection.

There's no requirement for them ALL to come together for this to happen, but I thought it pertinent to talk to you about since there is a shifting and increasing likelihood that it WILL happen.

This pretty much gives you the required info for how I want to lay out this argument.

But what am I even talking about?

The dollar runs the world

Over the last 18 months, it has paid bigly to be a dollar bull.

This scramble for dollars has set the scene for the equities downturn too, and its value is not simply down to rate differentials between the US and other economies, but is a factor of tightening liquidity.

Check out this chart from the guys at Quant Insight to show how badly USD liquidity had deteriorated recently...

That's a -5std deviation move, which is pretty insane!

The moves in JPY and EUR recently have primarily been driven by a broad dash for USD, with the Yen side specifically being driven by the market testing the BoJ's resolve at the 0.25% 10y yield cap (yield curve control) and the ECB flirting with rate hikes leading to Bund/BTP spread widening...

In both cases, what we are looking at is the effects of a tightening regime, and increasing credit risk, with the BoJ perhaps having to shift their 'pinned' level higher and the ECB with the traditional issues of fragmentation occurring (see sovereign debt crisis in the early part of the last decade).

This USD liquidity tightening shows itself best in 3M USD LIBOR, the rate at which banks charge other banks for lending out USD on a short term basis...

We can see it's climbed drastically from just before the first hike started...

In other words, banks want to charge more to those who want to borrow USD on a short term basis.

And what does that mean?

Why is this liquidity drain occurring though, and what evidence is there that interbank liquidity conditions, pertaining to USD but also generally, are under a spot of duress?

Well, LIBOR is a good measure (even if they want to get rid of it - disgusting)...

But you also have information like this coming to light...

If there is a perception that liquidity is drying up, the market will determine they want to be compensated more for holding this liquidity risk.

And what does liquidity risk tend to mean?

A solution to said liquidity risk has to be found.

What we can see here is that at times of severe stress, the Fed uses swap lines to keep markets functioning, and to allow credit to flow more freely.

Naturally, this is to protect the banking sector - contagion is not desirable.

Back in March 2020, they created the FIMA Facility, and that became a standing arrangement in July 2021...

Some details on that...

The Federal Reserve established a repurchase agreement facility for foreign and international monetary authorities (FIMA Repo Facility). By creating a backstop source of temporary dollar liquidity for FIMA account holders, the facility can help address pressures in global dollar funding markets that could otherwise affect financial market conditions in the United States. Its role as a liquidity backstop also helps to support the smooth functioning of financial markets more generally.

The FIMA Repo Facility allows FIMA account holders, which consist of central banks and other international monetary authorities with accounts at the Federal Reserve Bank of New York, to enter into repurchase agreements with the Federal Reserve. In these transactions, approved FIMA account holders temporarily exchange their U.S. Treasury securities held with the Federal Reserve for U.S. dollars, which can then be made available to institutions in their jurisdictions. This facility provides, at a backstop rate, an alternative temporary source of U.S. dollars for foreign official holders of Treasury securities other than sales of the securities in the open market. A temporary FIMA Repo Facility was established March 31, 2020, and the facility was made a standing facility on July 28, 2021.

All very boring, but important.

It is also worth noting that the five pre-existing swap lines covered every G-7 country, where volatility could have serious implications for the worldwide economy regardless of their direct relationships to the U.S.

However, 200 (mostly central banks) have FIMA accounts, with the big difference being that rather than using their own currency to swap for USD, they use their US Treasury holdings.

This makes it easier to liquify the world with USD.

I want you to carefully read the conclusion of this paper, and then to read the paper in its entirety, because this is concerning.

We have documented that China’s potential needs for US dollar funding during periods of stress are large. China’s use of relatively short-term dollar funding has been increasing and seem likely to continue to grow.

In March 2020, pandemic-induced turmoil in global dollar funding markets, as reflected in violations of covered interest parity, afflicted a number of countries relying on large dollar rollovers. The dislocations in dollar funding for Chinese financial institutions seem to have been large, judging from the data that we have presented from the cross-currency bases for USD/CNY and USD/CNH.

During future periods of stress in dollar funding markets, China might have difficulty in quickly sourcing a sufficient quantity of dollar financing to control liquidity stresses on its financial institutions and corporate sector, which could lead to global spillovers.

After noting some of the solutions that the Chinese authorities are attempting to implement to mitigate dollar exposures, we documented some avenues for dollar funding to Chinese entities in stress periods.

Among these, the FIMA Repo facility (to the extent available to the PBOC) may turn out to be the most effective, in terms of size and immediacy, assuming that China’s FX reserves include a large quantity of U.S. government securities that are custodied at the Federal Reserve Bank of New York.

FIMA and central bank swap lines are partial substitutes for each other – neither is likely to cover all needs, and both offer significant potential dollar funding to central banks facing a dollar funding stress event. In any case, there is a risk of disruption to dollar funding markets arising from a potentially large and sudden need for China’s banks and corporates to roll over dollar-denominated debts.

Absent a means of rapidly and efficiently dealing with these large dollar funding stresses, the adverse impacts on China’s financial stability and economic growth could be substantial, and could spill over to the rest of the world.

The little cynic in me thinks that the Fed introducing the FIMA facility is a way to provide China with an out when dollar funding is stressed...

Because traditional USD swap lines are a bit more of a pain in the arse to conduct and highly politically inconvenient for both parties (US and China).

Chinese banks can go via affiliated entities (countries which have swap lines already established with the Fed), but again, this is a pain in the arse too.

But the problem is the FIMA facility is capped at $60bn for each counterparty.

China has an enormous amount of treasuries, at just over $1tn, but who knows what their requirements for USD might be if the shit really hits the fan?

But this is good for a regime shift in USD.

If there has to be more USD supplied in the size China would need, it would surely mean the dollar sells off?

Especially if we consider that many other central banks will likely have to do the same to prevent a credit seize up?

That's my thinking here with this whole thesis...

That China actually demanding USD from the Fed means the dollar is a sell.

And if we dig into the potential amounts they might need from the paper above, we can come to the conclusion that it's pretty fucking hefty.

For example, over 75% of the Belt and Road Initiative loans are denominated in USD...

Go through pages 7 and 8 of the paper above to understand more on the potential exposures that China may face...

'But China has massive FX reserves. Why don't they just liquidate their treasuries to supply their economy with USD liquidity?! Duh, David. You complete idiot.'

If they wanted to experience huge mark-to-market losses.

March 2020 will show that there is the very real impact of a central bank losing money when the treasury market seizes up as there's a dash for cash (liquidating bonds to obtain USD).

Just yesterday, we had the first HIBOR (Hong Kong's equivalent to LIBOR) fixing above 3%...

In my view, I would not be averse to seeing a shift in dollar liquidity talk by mid-July and with some signs of foreign central banks needing to use the FIMA facility...

All the signs are there for it to be required, and we probably just need one little spark to light it.

They have been wrecked by rate increases, alongside all the other firms.

But rather than focus on these firms being crypto specific, it's better to focus on the opaque coming to light, where leverage and overly concentrated bets catch up with risk departments.

See that's what rate increases do - they re-allocate capital to more efficient endeavours, and what people tend to forget is as the Fed is hiking, there are broad effects on the dollar globally.

So when analysing central bank policy, this is why we always start with asking the question, 'what is the Fed doing?'

I want to reiterate that I am looking more at the precedent of what an increase use of swaps/the FIMA facility mean and what it might signify for USD.

This is by no means a sure bet, but if we look at how the dollar has responded in prior times to heightened use of these facilities, it makes sense to have a go at selling it, and the likelihood of China needing to use the facility in size adds to the slight idiosyncrasy of past uses.

Preference for selling USDJPY if we do get this trigger, since we will likely see both the effect of the yen safe haven return, mean reversion and the described mechanism above coming to light.

Please do ask any questions!

(And yes, I know I am outlandish with my theses, but you don't get anywhere by operating in the middle of the bell curve).

Just as the housing market slows, and interest rates rise. Top timing as always. And Cathie Wood's price targets are outrageous for a reason.

“Some parts of private equity look like a pyramid scheme” “You know you can sell to another private equity firm for 20 or 30 times earnings. That’s why you can talk about a Ponzi. It’s a circular thing.”