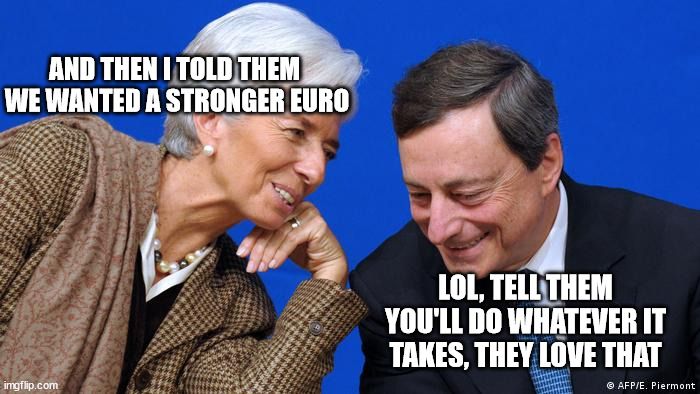 Brought to you by:

German front month power struck a peak of EUR 375/MWh on Wednesday morning, up 40% on the day and its strongest level since December -Montel

The inflation rate continues to soar on energy price effects.

With brent oil now above $110 per barrel and natural gas prices soaring as much as 60% this morning as the war in Ukraine continues, further spikes are to be expected in the short-run although base effects for fuel are becoming a substantial drag on the number.

It’s not just energy, food prices are also rising further on the back of the conflict and that adds to worries about elevated inflation for the months ahead. - ING

In the US, wage growth is more or less keeping pace with inflation.

In the EU however, wage growth is waaaay off the pace. Italy's 0.6% wage growth vs the 5.8% EZ inflation rate is pitiful 👇

Can the Eurozone cope with high energy prices without falling into recession?

Ah well. Back to the old playbook for the ECB. No rate hikes and infinite QE. A weaker euro is good for exports I guess. C'est La Vie...

However, he does have a point. At a time when energy prices are soaring, what good is a weaker currency to you?

A stronger currency buys you more oil and gas.

Crude oil priced in euros is at record-highs...

Deutsche Bank strategist George Saravelos makes the case for the ECB to break the habit of a lifetime and intervene in the opposite direction, before a weak currency inflicts real damage on the eurozone...

There is of course a big difference between what the ECB should, versus will do. But EURUSD depreciation on the back of the Ukraine crisis is now starting to inflict damage on the Eurozone.
The ECB needs to start thinking about ways to stop this.

There are of course a number of ways for the ECB to intervene in the market, starting with verbal intervention.
We would note that Governing Council Schnabel last week explicitly talked about the benefits of a stronger exchange rate to push commodity prices back down.

If things get disorderly, coordinated FX intervention by the G7 in a show of unity with Europe should not be ruled out. But ultimately, the most effective way for the ECB to defend the euro is by bringing rates back to positive and enacting a "stability QE" program to defend peripheral spreads at the same time.

This policy mix would be the single most effective "firewall" Europe can erect against the stagflationary risks of a rapidly deteriorating crisis.

It's a pretty bleak picture he's painting, and in the circumstances it's hard to rule anything out entirely.

The ECB does have form for intervening when absolutely necessary...

And it would be no surprise to see Lagarde wholeheartedly and sternly clarify that the ECB is ABSOLUTELY here to close the spreads (between the borrowing costs of EU member states).

As for coordinated G7 FX intervention, it would really take something to reach the kind of extremes that would make a modern day Plaza Accord (1985) necessary.

However, it isn't beyond the realms of possibility that the dollar would significantly appreciate in the near future. Especially if the Federal Reserve is forced to keep tightening to bring down inflation at home...

From 1980 to 1985, the dollar had appreciated by about 50% against the Japanese yen, Deutsche Mark, French franc, and British pound, the currencies of the next four biggest economies at the time.

Over the longer-term, a weaker euro seems inevitable. But don't bank on the ECB giving it up without a fight.

It's easy to get sucked into the good vs evil, crazed dictator gone mad narratives. Information overload + emotion = the fog of war

🔔 How Does X Make Money?

Are you SURE you know how your favourite companies make money?