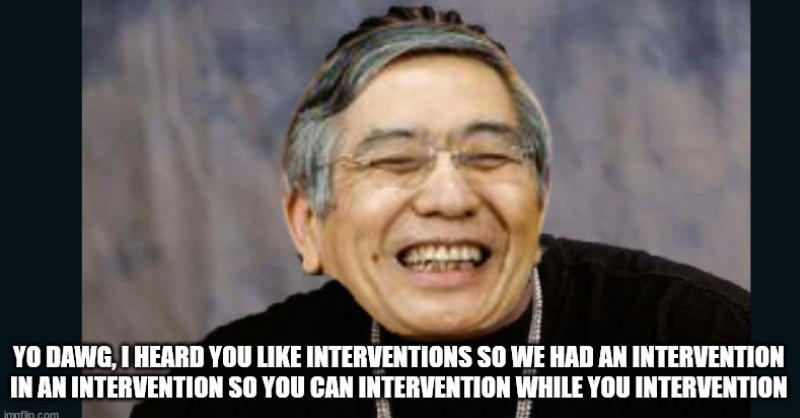 Japan's intervening again. Did you catch THE trade?

You know, the 150 trade. The level that EVERYONE was watching. They're definitely going to intervene at that level, it's a round number, it's extreme, they've been ramping up the rhetoric ahead of it.

Hindsight traders will tell you it was easy. Of course, in hindsight it always is.

In reality, how confident could you really be when taking this trade?

Yes, there was a very high probability that Japan's Ministry of Finance (MoF - not the Bank of Japan) would intervene for all of those reasons mentioned above.

But, how far beyond 150 would they 'let' price go before intervening is a far harder question to answer in advance. How do you define the risk at 150?
Have you got the stomach for a 200 pip drawdown on the trade?

Then there's the question of how successful the intervention would be. How do you measure that unless you're literally on the trading floor with them hearing the conversations, frantically brushing up on your Japanese?

Where's your exit? Will the market keep testing the interventionistas? How far will they push back?

Did you know in advance that the MoF would chuck an estimated $37 billion at the market and what the price impact of that would be?

Rhetorical questions, don't worry. None of this is really knowable in advance.
A traders job is to act amid uncertainty when a favourable opportunity presents itself.

To my mind, these types of trades are like kryptonite to inexperienced traders. You're at an informational disadvantage in a fast-moving market while trying to time a counter-trend move.

Often without any understanding of the macro picture. I mean, the factors driving the trend haven't really changed...

That's a strong trend. Is it over? No signs so far.

Yeah, there's a few whispers from the Fed and Timiraos that maybe they'll want to slow down soon, but the terminal rate is still expected to peak around 4.5% based on current pricing and FedSpeak.

If those auctions don't go well, there's a prospect that rates/yields head higher across the belly of the curve, launching another leg higher in USDJPY...

Then Japan either intervenes again or they don't...

Let's flip this around. The Fed's in control of this trade, not Japan. Any yen interventions can slow the rate of change, but unless the fundamentals reverse, it's just a temporary break in play.

The retail trading urge to fight the trend is an absolute account killer.
It encourages averaging down, loss aversion, and digging a deep hole that's always hard to dig yourself out of.

Going with the trend, (especially one as strong as this) is so much simpler.

How obvious is this level? 👇

600 pips down from the intervention high, right into prior support. Did I mention it was in line with the underlying trend?

Easier to identify in advance and way less uncertainty than trying to short.

"It's likely the MoF intervenes and pushes price back down, but I don't know what price they'll actually get involved at. If it gets back down here though, that's an obvious long"

Far easier to manage the risk, and way less emotional rollercoastering than trying to time the short. Imagine averaging a short every 50 pips and then puking the top just below 152 because you couldn't handle those red numbers on your account balance. Painful...

Keep in mind that whichever direction you choose on this, you're fighting a central bank here. Which side do you pick?

There's a huge difference between 'knowing' that Japan will intervene, and putting on solid trades that can actually profit from their market impact.

Really, what's happening here is a traders' dream. Japan's interventions ensure an 'unfair' price is available to trade at in line with the fundamental trend. Each intervention that fails is an invitation to load up and try again.

Unless the Fed helps out and turns dovish, (or something happens that causes traders to think they'll have to) the trend is firmly in place, and you need a good reason to fade it.

Of course, the Bank of Japan could abandon their low rate/YCC policy too, but that still looks unlikely when Japan's wage growth looks like this...

The takeaway. Think about what you're trying to do in these trades before putting them on. It's not about predicting the future. It's about the payoff and probabilities at different prices.

🔔 The Lithium Shortage That Never Was

No let up in the lithium bull market. The battery metal's up roughly 180% year to date. The market will always find a solution...