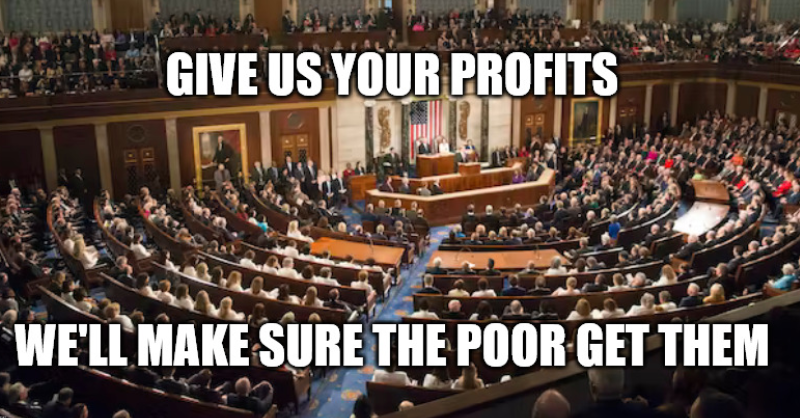 I hate windfall taxes. Being 100% up front so we all know where we stand. Here's why 👇

Supposedly, we live in a capitalist society. The general idea being that free markets will adjust over time and evolve to meet societies' needs. Innovation leads to creative destruction. Darwinism rules supreme.

Profits are the ultimate measuring stick ensuring that capitalism works as a meritocracy. The better you at your job, the more money you can make, and therefore the best businesses are the most profitable.

Obviously in the real world, this isn’t exactly how it works all of the time.

Governments intervene to ensure continued supply of commodities and services for the people, and also to limit the profits or power that certain companies can capture, especially if they grab a monopoly like position in the market.

It’s f**king complicated to disentangle. Most reasonable people understand (I think) that the pursuit of profit ensures progress of society.

Without that carrot we don’t push the limits, we won't push the boundaries and find new ways of extracting energy from the ground, the sky, the air or a passing asteroid or whatever. Why take risk if you won't get the reward?

At the same time, governments can't just sit idly by if a company is abusing their pricing power to extract maximum profits and harming consumers.

If a corporation becomes too dominant, that needs to be addressed. Historically, monopolistic behaviours have generally been penalised. People also forget that the best monopolies were often created by governments themselves and then privatised.

So why do I hate windfall taxes?

Because, much like income taxes, they penalise a snapshot in time where a company (or person) generates 'excess' profits.

Imagine you're some kind of tech whizzkid (maybe you don't have to imagine).

You go and work for some big tech firm. They pay you $500,000 annually to do your thing. After a couple of years, you quit. Jaded and sick of the corporate culture, you start up your own business. You're determined to do things better than the big guys.

Unfortunately, you're terrible at it. Your company doesn't even generate a salary. You spend the next 10 years of your life plugging away, living off your savings, and ultimately fail.

Your annualised (before tax) salary during that 12 year period is $83,333.
Contrast that with a safe and boring job where you get paid $83,333 (before tax) every year for 12 years. Which scenario leaves you better off?

Let's do exactly that in Illinois (which is apparently a microcosm of America), and use this income tax calculator to see what happens. 👇

Yep, the failed entrepreneur's worse off (by $116,740 total/ $9,728 annually) purely because of the arbitrary time period during which the money was earned.

Income and windfalls aren't exactly the same, but incomes, just like profits, can be highly cyclical. So who decides what constitutes a windfall instead of 'a period of cyclical outperformance'?

What's the criteria, the cutoff for excess?

Because of government regulation and over-expansion during the shale boom, energy companies were a terrible bet for years.

Some did better than others, but the general trend was to keep investing even as prices fell. Later, Covid hit, oil prices went briefly negative and the economic world stopped turning.

Energy companies were in trouble... Shell somehow managed to post a small profit in 2020 but it wasn't easy. Now they're on track for a record year of profits, some of which will be used to reward shareholders via dividends and buybacks.

The 2020 'shortfall' is pretty much recovered, and the 2008 profit record is in danger. What happens if history repeats? 2009 was a bad year. Will they be windfalled just before they need the cash to shore things up in a recession?

More importantly, aside from generating revenues for governments, taxes are incentives. Chevron's Mike Wirth gets it 👇

Others aren't quite reading the room...

Even though he's technically correct, there's a good chance most people don't own Exxon stock...

To the point. Instead of penalising these companies for making money, why not be more inventive?

Incentivise new supply with a windfall tax investment fund (or something similar). Basically 👇

"If you don't invest in more energy supply, we'll give the money to someone who will (or do it ourselves)"

You can structure it any number of ways, but the purpose is purely to encourage companies to invest: That money's going to be spent one way or another, you may as well have something to show for it.

The whole idea of 'redistributing' from energy companies to give to the poor is short-sighted anyway. And this rhetoric really boils my piss 👇

I know there's an election to win, but people actually believe this stuff.

If you presume that the government takes from the rich to give to the poor, maybe that's a bit naive...

So, what problem do windfall taxes really solve?

Companies have less to invest in new energy supply, and the governments don't have a stick to beat them with because they've already taken that money.

This is from the Exxon presentation 👇

What happens next year, and the year after that?

If windfall taxes are to be enacted, it needs to be as part of an overall energy strategy, ensuring energy supplies into the future and not just as a penalty for earning 'too much' for a brief window of time.

Short-sighted energy policy got us into this mess. It won't get us out of it.

The Veteran's predicted Facebook weakness since the pre-Meta days. Now it's all falling apart for the Zuck. Can he turn it around?

Hedge our FX risk for more profits? Sounds like a lot of work, we'll just sacrifice 12% of our annual profits instead...