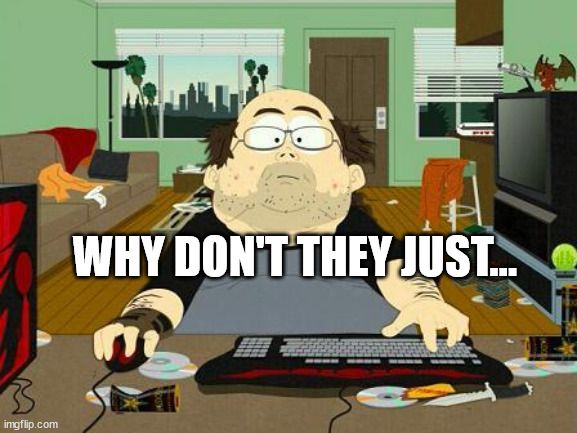 Everyone loves a simple world. It's a fantasy, but that never stops us taking shortcuts to conclusions whenever we can. It's just how we're wired...

The world is a complex place with occasional simplicity thrown in. Our brains prefer simplicity and heuristics. Neither of those things are likely to change.

Now, it's very hard to rewire our own thinking, but I've developed an extremely robust and highly sophisticated shortcut to filter out other peoples limited understanding.

Ready for the big reveal?

It's called the "WHY DON'T THEY JUST" filter.

Hmmmm... Gonna have to speak to marketing and jazz that name up a bit.

Basically, you'll often see ideas or solutions that are really too simple to be true, using words to the effect of "why don't they just..."

For most people, their brain will just devour that intelligent-sounding idea, agree and move on.

We need an example to move this forward...

Yesterday, I saw a (now deleted) tweet from a veteran investing wizard who's averaged an annual compounded return of 58% over 27 years. 🙄

Anyway, the tweet was deleted and I didn't grab a screenshot so I'll summarise...
Basically, it was words to the effect of:

Notice how brilliantly logical that sounds? Punish the Ruskis and keep the oil in the U.S: A win-win scenario. It just makes sense!

Unless you actually understand the complexity of the oil market.

But I understand enough to know why this won't work. (If you don't know already, I won't leave you hanging too long)

This type of thinking is an easy trap to spot, especially in others: If it seems too good (or simple) to be true then it usually is.

How realistic is it that the brightest minds in the oil industry (over $100 billion annual revenues in the U.S. alone) hadn't spotted this 'flaw' already, yet @oilguy69 (or a supposed investing wizard) was all over it?

Now for the proper answer via the American Petroleum Institute...

The TL;DR is that oil refineries are set up for (roughly) frictionless global trade. Each refinery will have a specialisation. Overall, this allows the US to process a wide range of oils rather than relying only on the domestically produced stuff.

Crude oil is not a homogenous product. The U.S. continues to import and export crude oil because the viscosity of oil (measured by its API gravity) being light or heavy and its sulfur content being low (sweet) or high (sour) largely determine the processes needed to refine it into fuel and other products.

In general, refineries match their processing capabilities with types of crude oils from around the world that enable them to:

Heavier crude oils contain more complex molecules, so they are better for producing many of these niche products.

All of which means that it wouldn't make economic sense for the US to 'just' turn inwards and become energy self-sufficient.

The ability to process the heaviest crude oils has vastly expanded the Western Hemisphere’s oil resource and supply potential, as these oils come mainly from Canada and Venezuela. Therefore, many U.S. refiners are configured generally to process heavy crude oil.

Shifting purely to light crude oil could underserve some product markets and idle (or even strand) the hundreds of billions of dollars invested in refinery conversion capacity.
The supply, demand and prices for various crude oils and products have continually solved this equation for producers and refiners to determine the role that crude oils of different qualities should play in the market, in accordance with economic fundamentals.

Since the U.S. energy renaissance has accelerated, however, most of the 4.8 mb/d of new U.S. oil production the past six years has been light oil.
With U.S. refining capacity geared toward a diverse crude oil slate, a key implication for U.S. petroleum trade is that it would be uneconomic to run refineries solely on domestic light crude oil.
Consequently, the United States:

Must import crude oil of different qualities to optimize production, given its mix of refining capacity; and,

Has more light crude oil than it can handle domestically, while this same quality of oil is in high demand in Asia Pacific and other regions that mainly have simple refineries (without conversion capacity).

Therefore, differences among crude oils are important reasons why the U.S. continues to import oil in an era of domestic abundance and export light oil that can be problematic, operationally and financially, to handle with existing U.S. refinery capacity (but also is of great value to refineries globally).

And that's it. The reasons why they can't/shouldn't "just" focus on domestic oil production.

Why don't they just is an excellent filter for any over-simplified solutions offered by over-reactioners, emotional tweeters, point-scoring politicians and journalists always looking for an angle.

Whether it's the property crackdown or pandemic policies, China's low consumption is concerning

The Fed won't hike and the return to easy-money policy means BTFD. Don't bank on it