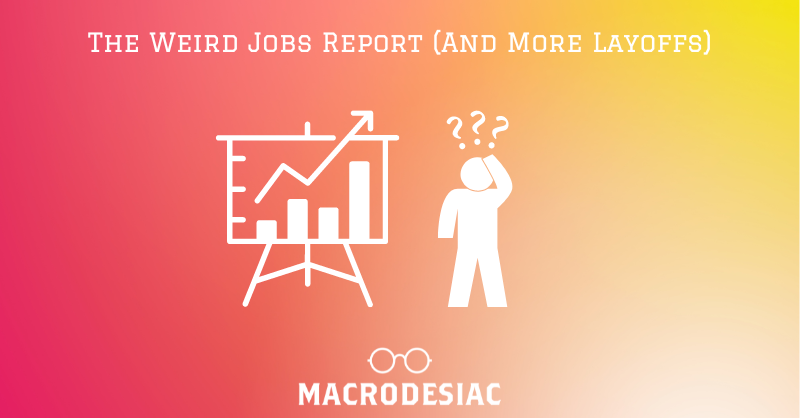 But the unemployment rate jumped to 3.7%, even though the participation rate (total number of available workers within the overall population) went down.

So.... Jobs have been created, there are fewer available workers, yet unemployment is higher? Make it make sense...

It's not uncommon for the jobs reports to be a minefield, especially when the economy's in a transition phase rather than a trend phase.

Post GFC, jobs were being lost every month, nothing else mattered.

As economies reopened after Covid, jobs were being added every month. Nothing else mattered.

That list is set to grow again once Zuck cuts his workforce down to size...

Basically, there's a load of counteracting forces right now. Although tech companies are undoing their massive hiring binge, it's not creating a surge in unemployment.

It's pretty insane. Finance companies are laying people off too, but apparently there are still 10 million job openings in the US of A...

In theory, people can simply change industries. Transferable skills and all that. If you can write code for Twitter, you can do the same for a healthcare company... or anyone to be honest.

Probably won't get to do those "day in the life of" TikToks though...

Which brings us to the quality/quantity debate. The total number of jobs can change without telling us anything about the quality of those jobs.

That's not just abut the perks, but also if the jobs are full or part time. 👇

Everything points to part time jobs to fueling the job gains.

Which sort of puts a spanner in the works of the strong labour market narrative.

In fact, as shown below, since March, the US has lost 490K full-time employees offset by an almost identical gain of 492K part-time employees, while 126K workers were forced to get more than one job over the same period.

On top of this, the establishment and household surveys are heading in completely different directions 👇

Goldman reckon it's largely down to residual seasonality in the employment sector (especially janitors and support staff) but that's really boring. This is the trend that matters 👇

Regardless of the precise pace of employment growth in October, the broader set of employment data suggest that job growth has slowed and will continue to slow: job openings and quits are declining, the ISM employment indices in manufacturing and services have fallen to neutral or contractionary levels, and many publicly traded companies have announced hiring freezes.

Sums it up pretty well. Gradually, the power of labour to push for higher wages will weaken, and if current trends continue, consumers will keep consuming and piling on debt regardless...

Keep an eye out for the latest consumer credit data from the Fed due out later today. Employment slowing just as revolving debt (credit cards etc) rises back to the pre-pandemic share of income is less than ideal.

I've always wondered about the relationship between FTX and Alameda, the entity that 'is but isn't' related to FTX.