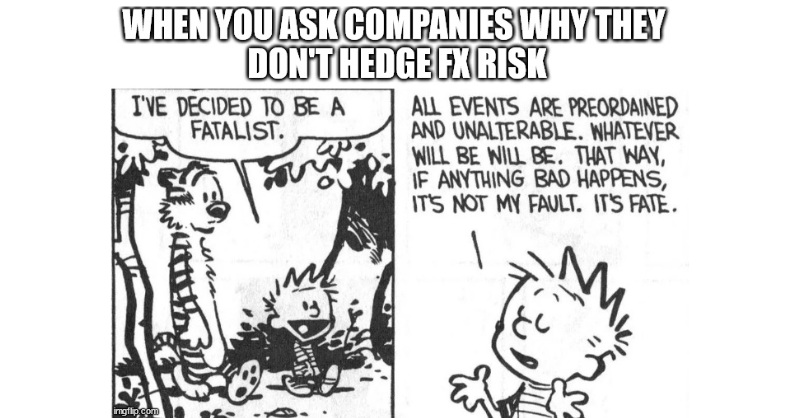 Hi everyone. I've got a billion dollar problem and I'm going to do ABSOLUTELY NOTHING ABOUT IT.

Sounds mental, but that's exactly what some of the biggest companies in the world are saying right now. The strong dollar has been repeatedly mentioned as a profit drag in company earning calls and reports yet many are doing nothing about it.

For some, it's even a deliberate choice.

Yep, one billion dollars in revenue incinerated by the strong dollar. For context, Netflix expects $31.5bn of revenues for 2022 (which could/should have been closer to 32.5bn)...

All of which impacts profitability 👇

Operating income is a company's profit after deducting operating expenses such as wages, depreciation, and cost of goods sold

Netflix expects $5.5 billion operating income for 2022. That's $800 million less than it could/should have been. Almost 13% of profit sacrificed to the King 👑 Dollar because... Well why actually?

Our FX exposure is growing as we expand internationally. We do not use hedging derivatives. Rather, when favorable, we engage in natural hedging, in which our spending for international markets are paid in local currency to match the revenue collected from our members. We also adjust prices from time to time to mitigate the negative effects of FX.

However, our FX exposure, which is disclosed in our 10-Q and 10-K filings, will rise as we move increasingly towards global licensing, where content costs are more likely to be dollar denominated.

Ridiculous innit? "we acknowledge that our FX exposure is growing and that it's likely to increase further as more of our revenues are generated overseas while the majority of our content costs are denominated in dollars."

(But we'll do nothing about it because it'll just work itself out in the end, by magic, like in one of our wizarding series) 👇

We're going to pitch a new series for Netflix. It's called The Dollar Smile. Here's the storyboard... 👇

Jokes aside, it's insane to me that companies don't take action to at least try and mitigate some of their FX risk. The incentives are HUGE. All of these are recent headlines 👇

Take this one from Bloomberg 👇

Investors sometimes brush off warnings based on foreign-exchange fluctuations, with some market watchers arguing it’s often an excuse for poor performance or only an issue on paper. That isn’t the view of Wolfgang Koester, senior strategist at treasury management software provider Kyriba Corp.

He estimates that by the end of the third quarter a group of 1,200 large companies in the US and Europe will have lost more than $60 billion in sales to foreign-currency fluctuations since January. The firms could end up taking on average a 6-cent hit to earnings per share, up from the usual 2 cents to 4 cents.

“It’s not an accounting issue,” Koester said. “If you sell something and for that you get less in your currency — in dollars, which is where your investors are — you have less money.”

Hard to argue against that... or this 👇

Soooo, why not develop a hedging strategy? If these guys can do it... 👇

“In March, when corona hit, markets were very nervous, and the small currency SEK plummeted compared to the EUR and USD. We would have lost maybe 10% in the exchange rate, but because we had hedging contracts in place, we managed to avoid the loss,”

Under the strategy, Newgen calculates the amount of each currency it will likely need in the future. For the three months to come, it hedges 75% of those payments; for three to six months out, 50%; and for six to nine months out, 25%. As the months pass, new hedging contracts are continuously added.

You're telling me larger companies can't calculate this? Smart people might even figure out a way for FX hedging to have a positive effect on the bottom line, like Volkswagen's Nickel bet...

The problem? There's always a risk that you get the hedging strategy wrong. If you hedge the wrong risk, the loss is YOUR fault. Career risk = inaction?

Which means it's better just to be a fatalist, right? Nobody could've done anything to avoid this. It was just fate...

Windfall taxes are top of mind, but where will the money go and what problems will it solve?

Whatever happens today, this isn't the pivot you're looking for