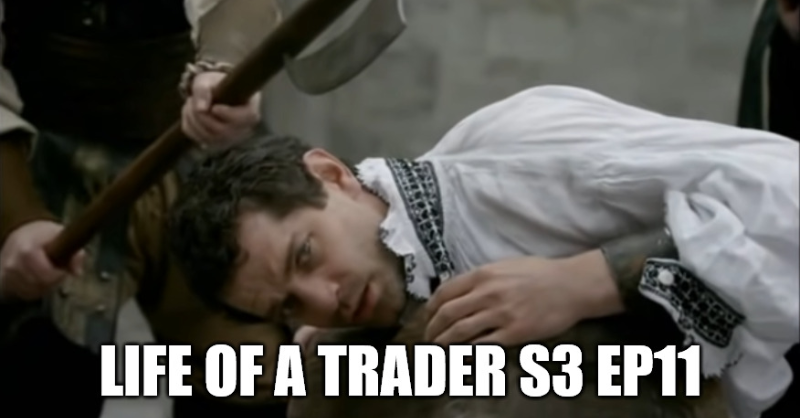 🔔 The Signal From The Noise

The Veteran draws parallels between Thomas Cromwell, the modern day trader, and the executioners scythe hanging over European credit markets...

One of the UK's greatest living writers passed away recently. Dame Hillary Mantle was an unassuming and highly intelligent woman from a humble background.

She was also a literary colossus, winning the Man Booker prize on two occasions, spell-binding millions of readers, including myself, with her Wolf Hall Trilogy (which if you haven't read, may I politely suggest you should).

The protagonist of these stories is Thomas Cromwell, the son of a blacksmith from Putney, who became the most powerful man in the country during the reign of one of our most colourful monarchs, Henry VIII.

Cromwell's rise to power was spectacular as he navigated many challenges along the way, however, his demise was even swifter.

Perhaps that’s why the story struck a chord with me.

The tale of one man battling global politics, economics and the envy of those around him, certainly has some parallels with the lot of a modern-day trader.

Thankfully the penalties for getting it wrong are not so severe these days. Cromwell on the other hand was executed on the 28th of July 1540, as chronicled in Mantle’s last published work the Mirror and the Light.

Another UK icon came close to a sticky end recently. The UK gilt market underwent a period of intense stress in the wake of Kwasi Kwarteng’s tax-cutting “mini-budget”.

The whys and wherefores of what happened have been covered elsewhere.
Suffice to say the UK gilt market was sending a clear signal about what it could, and couldn't tolerate.

However, at the time, in midst of largely ill-informed media furore, it was almost impossible to separate the signal from the noise surrounding it.

With that in mind are there any other signals or hidden information within other bond and credit markets? If there are, can we interpret them? And if we can, what do they tell us?

The UK almost came a cropper because of the outsized effects of a long-term credit derivative, known as LDI. Derivatives are largely designed to fulfil two roles which are to diversify risk and or leverage returns.

LDI or Liability Driven Investing aims to achieve both of these functions, matching the long-term liabilities faced by defined benefit, or final salary pension schemes, with enough leveraged returns to match or exceed them. Only no one seems to have told the Bank of England or the Treasury about this, but that's by the by for the moment.

The credit derivatives market seems like an opportune place to start our search.

We don't have to look far for our first clues - the sound bytes below are taken from a BofA research note on Credit Derivatives Strategy. The charts are also borrowed from the same document.

“Liquidity metrics have deteriorated notably over the past year across fixed-income pockets. The European government bond market liquidity backdrop is the worst since the European sovereign crisis”

“Liquidity stress is also rising rapidly in the credit market, especially in the physical corporate bond market.  We note that bid/offer costs for high-grade Euro-denominated bonds are currently worse than during the pandemic's early 2020 shock.”

Liquidity or the lack of it is always at the heart of problems within financial markets.

Think of liquidity as the grease or lubricant that allows the machinery of the markets to operate without friction, if liquidity leaks out of the system or isn’t refreshed from time to time then that machinery begins to grind on itself and could ultimately grind to a halt.

This is effectively what happened in the commercial paper markets during the GFC in 2007/8. Commercial paper are the short-term loans and IOUs that are issued by businesses to smooth out the peaks and troughs in their cash flow.

More charts from Bank of America

The grey-shaded areas within this chart signify US recessions.

Lower liquidity can mean that debts can become more expensive to service, simply because borrowers are fighting over a smaller pool of capital.

So which nation-states have high levels of debt relative to their GDP? In this case, we can think of GDP as a kind of national cash flow with which to service debts.

Interesting to note that the UK's Debt-to-GDP ratio is only marginally higher than the Eurozone figure. And as Tim flagged the other day the 69.30% figure for Germany masks the fact that they have another €350 billion (and rising?) of  “off balance sheet” debt/spending to contend with as well.

Rising interest rates will also increase the cost of debt servicing among the G20 members as well as in less well-developed economies.

Rising interest rates will also have implications for European corporates....

As default rates among high-yield borrowers rise, when the macro background deteriorates and money becomes scarcer and more expensive.

As BofA’s analysts put it

“While credit valuations are currently much more attractive than any time so far this year, we still worry that valuations can become cheaper as the year draws to a close, especially for higher-beta pockets.”

The UK’s finances have been put under the microscope by the media and the markets of late. However, judging by this evidence European economies can and should expect an equally rigorous examination in the coming months.

As we enter a winter in which short working and power cuts can't be ruled out.

Deutsche Bank commented on this in their weekly energy blog saying:

“With the heating season having started in October, gas supply-demand dynamics enter a critical phase in the ongoing energy crisis.
Heating behaviour of German households (strongly dependent on winter temperatures) will be key in the upcoming months, as 50% of all residential units in Germany are still heated with gas and household gas consumption accounts for 50% of total German gas consumption in the months from October to April (based on data from Trading Hub Europe).”

Still, at least we can count on European Unity™ to get the continent through the crisis...

Keep an eye on the spreads too. Italy-Germany (BTP-Bund) spread is back above 250bps 👇

Nothing's really changed since we wrote this in July 👇

🔔 Hard To Be An Optimist

But it's not all doom and gloom, even if the big picture looks dystopian

The bullwhip effect is inevitable and a key supply and demand concept. Discounts for us means lower profits for those filthy capitalists...