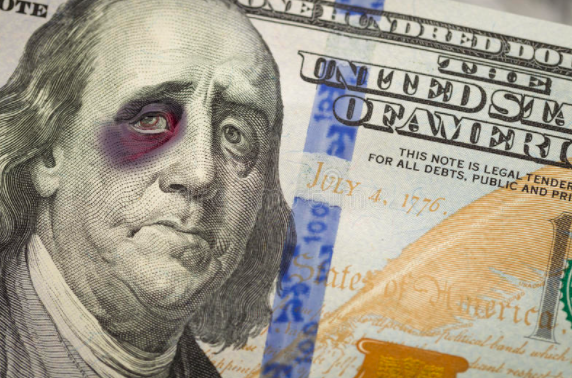 Pretty bold that, ain't it?

You're going to need a good chart to signify why too.

To be fair, it's not the only thing you're gonna need, but at least it gives a very strong foundation for you to centre your view.

I love bringing this chart up because people are like, 'wtf, that's not how I've been taught things work?!'

Well, things don't always work how textbooks tell you they do, and markets are forward looking, unlike textbooks which seem to just believe in the present and that all information is currently in the price (it's not, and I will die on this hill).

What's this magical chart then, Dave?

It's not so much magical than it is surprising to most who see it for the first time.

'So you're telling me that after the Fed raises rates, markets then sell dollars?

Interest rates are higher so that SURELY means capital is attracted into the dollar?

It's a carry trade, you idiot!'

Well yes, that is true.

But as I said, markets don't always adhere to the academic way of thinking...

What we must always factor in is how far ahead is the market looking, and how long has the market been looking at an event happening.

In the current context, inflation has been a mainstay at the tip of everyone's bloody tongue for about a year now.

It's boring, quite frankly, but obviously vitally important when we consider what our next play will be.

And this is me removing my team transitory cap, and putting on my 'what are policy makers going to do now' cap.

Obviously with an inclusion as to what the market is showing too.

Eurodollars have been gradually pricing in a hike for March since about November for example, with naturally more impetus more recently with the chatter coming out of the Fed.

*Barkin: Pressure on Supply Chains May Persist Into 2023

If we look at the two charts of when the dollar tops out, it averages roughly thirty to fifty days before the hike occurs.

If we want to be seriously crude with our estimate then, the March fed meeting is on the 16th, which implies we should see some dollar toppishness at around the end of Jan (the 25th to be precise) and should form a complete top by Valentine's Day (14th February)!

Naturally we can take this with a pinch of salt.

But let's add a bit more to our view.

A big bout of this has certainly come from European conditions surround continued lockdowns, lower yields and general apathy within the Eurozone.

But if we take a look at how bund yields are shaping up now, could we be seeing a turnaround in this situation, and therefore a change in the direction of the dollar index?

I would argue that German bond yields reaching into positive territory are a more overriding factor than US yields simply being higher, really since the ECB has been trying to get inflation higher (and I may also be thinking that in the EZ's case, nominal yields being up are a reflection of the inflation situation, more so than in the US) resulting in a higher potential for a rate hike.

This is important - if we look back at the past decade, there has been a next to zero chance of the ECB raising rates.

What we are examining here is merely the potential opportunity for them to raise rates and not the reality of whether they will - again, a very important distinction.

What this can provide us with is a change to look at whether the euro will go higher than the dollar in this scenario, and I think it will.

Dollar longs are at extremely elevated positions, whilst the euro is relatively flat.

This certainly gives rise to some unbalanced positioning.

What did Einstein say again?

Every action has an equal and opposite reaction?

And every opposite reaction needs a catalyst to spark it off, in this case, it could be the Fed meeting in March, but with the dollar top happening before then.

So, annoyingly, I'm about to turn bearish USD.

We've just outlined that the euro could be a good play.

But what about yen?

I'd mentioned yen back in the piece from last week and how CADJPY to the downside could be a decent thematic play (which I am currently in).

But USDJPY would appeal to me as another option, especially with this in mind...

In that regard too, there could be an accelerant effect, where US rate hikes delever risk assets and a flight to safety occurs to yen, and potentially the Swiss franc, although I think it is more probably that the Swiss National Bank would rotate to buying US Treasuries if this were to occur, rather than repatriating to the franc, which would be a massive driver for a safe haven bid.

With that then, I think it's time to ask ourselves where we are in the market cycle...

Where's your head at?

Here's the diagram to pay attention to...

This was taken from the piece below...

The conclusion we came to was this...

These are very much defensive plays on the market as a whole.

That's not to say to dump your NASDAQ exposure - that would be silly.

But I think the time is right to start looking a little more defensively, since there are far too many factors to make me think that simply holding through the next 6 months is optimum.

We are still in caution mode in my view, but the key will be what the real GDP growth expectations will be into H2 2022...

Will they start to disappoint if the Fed starts hiking?

And here's a point - if the housing market starts to tick lower as a result of higher rates, what does this mean for the wealth effect?

Median US house prices are at record highs and have experienced the most ridiculous rate of change imaginable over the past two years, which compounds our thoughts on the 'Faux Business Cycle'.

They are for a turning, and with that the wealth effect should begin to diminish.

And we can perhaps think of revolving credit as an interesting barometer of consumer demand and ask the question, 'could there end up being a diminished wealth effect?'

US consumers paid down a hell of a lot of debt ($127bn in 2020) and has rapidly increased revolving credit again by $74bn.

Could a rate hike be an issue here, especially if it shows up some users to be sub-prime?

Although do remember that financial conditions are still loose.

🔔 Is The US Consumer Tapped Out Already?

US consumer debt expanded by a record amount in November with no sign of excess savings being splurged... Soon time for growth fears to take over from inflation fears?

OK, maybe the US consumer isn't tapped out just yet...