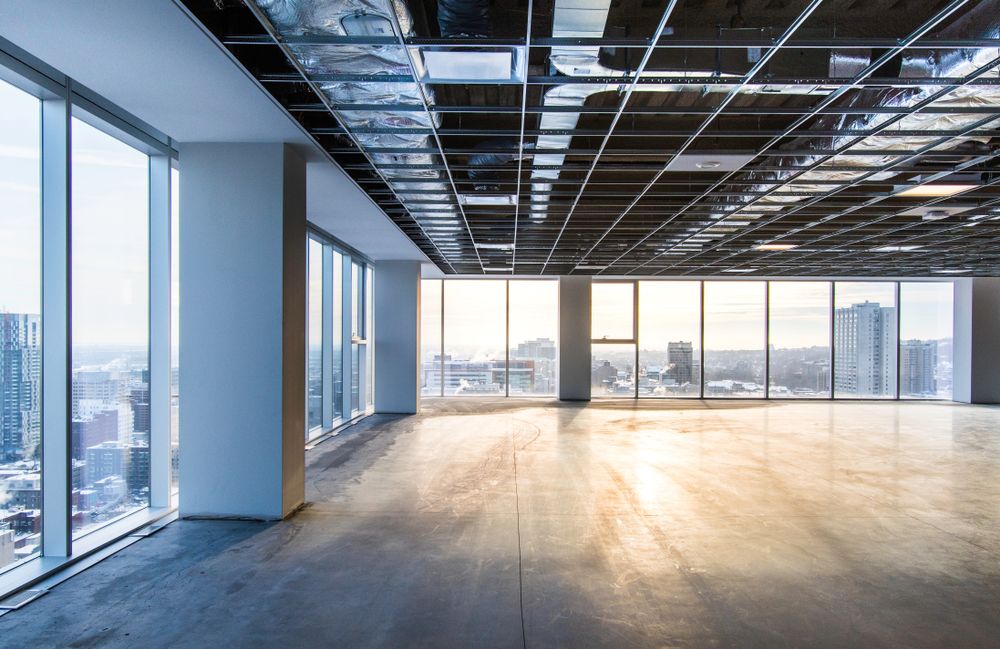 Regrettably, I can't take credit for the superb doomporn title. It's the heading of this paper: Work From Home and the Office Real Estate Apocalypse

Commercial real estate is a huge area of the economy that everyone's been worried about ever since the pandemic. Online shopping increased and the remote work trend was obvious as soon as lockdowns were imposed.

Interestingly, the concern at the time was that an entire world of cheap labour would open up to companies as the remote work floodgates were opened.

Current workers would be even more screwed over by their corporate overlords as they were forced to compete with a truly global workforce. Things haven't worked out that way. Ironically, all we hear about are labour shortages these days.

But it varies massively depending on the type of service...

"For industries typically geared toward office work, such as professional and business services and financial services, the share of hours worked remotely was above 50 percent, on average."

Soooo, only 50% of the office space would be required then...?

Back to the Office Apocalypse paper. The authors found that higher quality buildings (built more recently, more amenities) are holding up just fine, but...

lower quality office stock appears to be a more substantially stranded asset, given lower demand, raising questions about whether these assets can be ultimately repurposed towards other uses.

Because a large fraction of leases (66% in the U.S., 73% in New York) have not come up for renewal yet since the start of the pandemic, and because vacancy rates are already at 30-year highs in several major markets (20.4% in New York in 2021.Q4), rents may not have bottomed out yet.

Especially in New York, where there's been a mysterious and totally unexplainable exodus... 👇

They started turning up in Miami... (FT)

In the year to July 2021, more Americans moved to Florida than any other state — 220,890 of them, according to census data. The influx included billionaires and hedge funds unmoored from their Wall Street offices who flocked to South Florida for its low taxes and year-round sunshine.

In June, billionaire hedge fund manager Ken Griffin said he was moving his firm Citadel from Chicago to Miami due to rising crime rates, calling the Florida city “a growing metropolis that embodies the American dream”.

Carl Icahn moved his hedge fund office from New York to Miami during the pandemic, and Blackstone announced it was opening an office there in 2020. Venture capitalists David Blumberg and David Sacks are among those who have spent millions on waterfront homes on Miami Beach.

The lawyers soon followed. In May, Kirkland, the world’s highest-grossing law firm, announced it was setting up shop in Miami with lawyers moving from Chicago and New York. Winston & Strawn opened its own base in May, and King & Spalding is set to move in too.

Lots of dynamics to consider here. While there's always a chance that companies insist on staff returning to the office, it doesn't seem like everyone's keen...

And it's having an impact on spending plans too. Meta is reconsidering the fit-out of their new HQ in Dublin. They signed a 25 year lease back in 2018. 👇

Will they try to back out? According to a person familiar with the matter (OK, fine, it's a Macrodesiac member who works in the sector that tipped us off), TikTok, Twitter & LinkedIn have all pulled out of Dublin deals recently.

Unless you've got some office REITS sat on your pension/portfolio, it probably won't affect you, but there could be some serious losses in the sector and the second order effects could ripple out.

The authors concluded that:

But this might not be the most important real-world implication. The New York City budget could take a big hit 👇

Given budget balance requirements, the fiscal hole left by declining CBD office and retail tax revenues would need to be plugged by raising tax rates or cutting government spending.

Both would affect the attractiveness of the city as a place of residence and work.

It's sure to be a similar story elsewhere too, and not just from a tax perspective.

The company purchased the building in 2012 for $53.8 million. Not much wiggle room to make that back...

Excess savings gone, credit card debt rising. But it's not all doom and gloom just yet...

Keep calm and carry on? With these energy prices I can't even afford to put the kettle on for a cup of tea Clive. I'm not bloody calm!