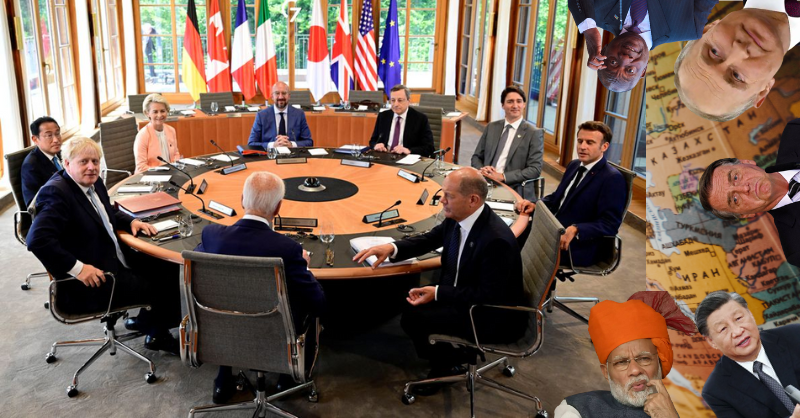 I apologise in advance... We've got to talk politics. It's a necessary evil sometimes. As a general rule, it's best to ignore almost everything politicians say.
Most of the time you won't go too far wrong. Plus it saves time and wear and tear on the swear jar.

But every now and then, the politicos announce things that are interesting and/or important.

Here's one to file under "no idea how they'll manage it, but they could give it a crack anyway and see what happens just for the LOLZ" (because that's how energy policy seems to be made these days) 👇

But there are a couple of other things going on that strike me as far more consequential for the big picture (between now and 2030). First up 👇

The timing of this announcement is especially intriguing given some of our recent work around China's debt situation and the drying up of China's BRI funding, especially in Africa and in Latin America.

Although this idea was first floated at the 2021 G7 meeting in Cornwall, England, this years' meeting saw actual numbers...

Hundreds of billions of numbers.

President Biden, meeting with the Group of Seven leaders in Germany, said the U.S. would contribute $200 billion over five years toward the Partnership for Global Infrastructure and Investment, from a $2 billion solar project in Angola to a $600 million submarine telecommunications cable connecting Singapore to France.

The U.S. money is a combination of direct government aid and private investment, officials said. The U.S. will aim to mobilize $600 billion in overall investments with funding from allies by 2027, though many details were unknown.

“This isn’t aid or charity, it’s a chance for us to share our positive vision for the future…because when democracies demonstrate what we can do, all that we have to offer, I have no doubt that we will win the competition every time.”

Why does this matter and why should I care?

We've referenced this paper a lot lately. The title is simply "Dollar funding stresses in China". Plain and boring.

But when you consider how many battles China's fighting at once, and weave the picture together, it's not an overstatement to say this issue could be critical for the Chinese economy and their position in the world.

Here's a snippet (all emphasis is mine) 👇

Chinese banks also have dollar liquidity and credit exposures through their lending to borrowers in countries involved in the Belt and Road Initiative (BRI).

Horn, Reinhart, and Trebesch (2021) estimate that around 75 percent of BRI loans are denominated in US dollars and are provided by China’s development banks and four largest commercial banks, which are predominantly state owned. Updated AidData suggest that between 2000 and 2017, $1.6 trillion dollar-denominated loans and grants (in 2017 constant dollars) were provided to BRI countries--90.6 percent of the total.

In sum, non-financial Chinese corporates have a large proportion of the outstanding dollar bonds issued internationally from emerging-market countries. The dollar amounts of these bonds are large.
Moreover, a large proportion of them are relatively short-term (requiring rollover by 2024) and have been issued by entities that have no natural source of dollar income.

So, China's been lending out huge sums of dollars (because developing countries generally want dollars, not anything else), and a load of these loans will need to be rolled over, (presumably at less favourable conditions than the original loans due to higher interest rates)....

Many of these countries have no natural sources of dollar income (such as large, direct trade links with the US), and we know that many of the world's smaller economies are already struggling with fuel prices, inflation & growing social instability.

Given China's increasing unemployment, economic struggle, and with the fallout from the property 'de-leveraging' still weighing, can China keep dishing out dollars abroad?

Or will they become an unhappy, over-leveraged creditor? Demanding more returns on their investment and/or higher interest rates on the refinancing?

Plus, if China's developers continue defaulting on their dollar bonds, those dollars won't come so cheap to China either. It's not so outlandish to think China will press their debtors...

Contrast this with the G7/US pledge to invest $600 billion.

I see it as a two stage plan.

Yes, it's a massive oversimplification. But it's not inconceivable that the West will come bearing gifts just as China's demanding payment (of whatever kind)...

It sets up a fascinating battle, and China will want to ensure their investments don't go the same way as many of the 790 Chinese projects in Venezuela.

And here's where the issues with China's BRI could come to the fore too. Many promises haven't been kept. Development of surrounding infrastructure alongside the core project that China is interested in has been lacking.

Often, China has imported Chinese labour for these projects instead of using local workers. The quality of work has been criticised too...

TL;DR, in many case, the locals haven't seen a lot of benefit from China's investments.

Now, I'd love to believe that G7 policymakers are fully aware of China's dollar situation and see this as the perfect strategic moment to redress the balance.
But I just can't believe they're that capable. It's a lucky coincidence.

However, I do see this as another potential nail in the coffin of the China the West wanted (and another admission of that fact on the West's part)... 👇

And it's another step towards a potential 'iron curtain' between the West and the DragonBear axis of China & Russia.

Which could see China turn inward and rebuild some old alliances...

Now, the BRICS alliance failed last time, and there's not much to suggest it will succeed this time round. Nor is any new currency likely to challenge the dollar's trade dominance any time soon.

But a continuing turn away from the West IS on the cards. And it will surely lead to more conflict as the West treads on toes while seeking to develop their own ties in developing nations and turn away from China themselves too.

A huge selection of markets are available to trade with Macrodesiac Partner capital.com 👇

🔔 The Market Doesn’t Care About Your Morals

If you want to understand markets, you have to put morals to one side. The world doesn't run on platitudes...

🔔 The SNB Wants A Strong Franc... Will They Sell Apple To Get It?

The SNB pledged to intervene and keep the Franc strong. That tees up sales of (US) stocks, foreign currencies or bonds.