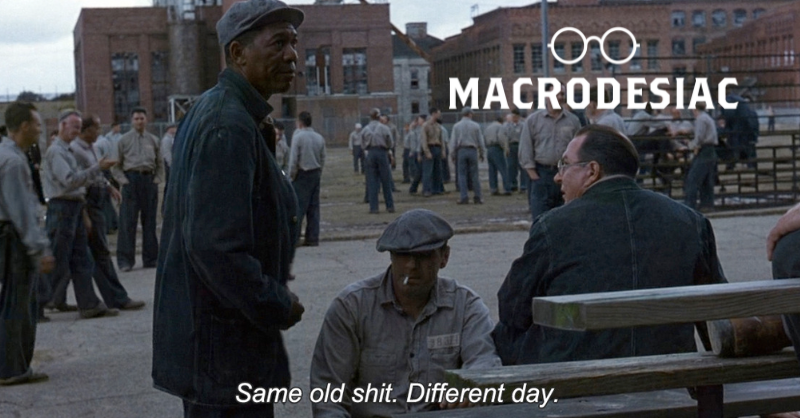 I don't post as much on Twitter as I used to, but I did share my thoughts on books about trading back at the end of October 👇

I first read Reminiscences of a Stock Operator more than 20 years ago.

That was a time of dramatic change. We'd just had the first dot.com boom (and bust) with its mantra of “this time is different” alongside the all to familiar buzzwords and phrases like paradigm shift.

Whilst the networked world was certainly a different place, it was something we'd seen before. Or at least that's what became clear as I read about the life and times of Jesse Livermore, the hero of the book.

Though the book is a fictionalised account of the life of a trader, no-one doubts it's about Livermore, who was born in 1877 and was arguably one of the world's greatest traders.

He is credited with introducing the idea of day trading as a discipline, though to my mind he was really a swing trader, and probably the original “big swinging dick”.

In the book, we read about how the railway, the telegraph, the telephone and the radio changed the face of communications and commerce. And you quickly realise that they were the internet of their day.

Ocean liners once ruled the waves, however in a few years they would be replaced by airliners and the jet age, and men would soon orbit the earth and set foot on the moon, using rocket technology developed as an act of desperation by a nazi Germany facing defeat in WWII.

Livermore died in tragic circumstances in 1940, so he didn't see much of the modern world. But were he to walk among us today I don't think he would feel too out of place.

And certainly not if he were in the dealing room

Yes, it might take him a while to get to grips with modern price displays but he was an expert tape reader, a skill he learnt as a teenager in bucket shops - firms that allowed you to bet on the rise and fall of stocks or commodity prices (doesn't that sound a lot like CFDs).

Born into poverty, Livermore would make and lose several fortunes in his trading career. He started young, as a board boy at US broker Paine Webber, when he was just 14, having been forced to leave school and get a job to support his family. He was a quick learner and between 18 and 20 he racked a 1000% return generating $10,000 in profits in that period.

By favour or fortune, whilst on holiday in Florida, he took a substantial short position in the Union Pacific Railroad just a day before the catastrophic San Francisco earthquake of 1906, making another $250,000.

Livermore made $1 million in one day through shorting in the market panic of 1907. Though legend has it that his then mentor, the Banker JP Morgan, who had personally just bailed out the whole market, asked him to refrain from further short sales.

Seventeen years later Livermore cornered markets in wheat and corn and made $10 million. However, his greatest triumph came in 1929 when he used dozens of brokers to amass large short positions on the NYSE ahead of the Wall Street crash. An event that netted Livermore a profit of $100 million.

It's timely to remember Livermore, because in recent days we have lived through the collapse of a nested investment. Something that he would have been very familiar with.

In his time it wasn't a cryptocurrency exchange that failed. It was the investment trust market. The principles behind the two events are very similar.

You can read about the role investment trusts played in the crash of 1929 in this article from 2002:

And in this book:

The author of the book and the subject of the article, the economist JK Gailbraith perfectly described a nested investment and its consequences 👇

In 1928 Goldman Sachs (yes the very same Vampire Squid we know and 'love' today) set up the Goldman Sachs Trading Corporation and sold shares in that stock to investors including members of the public.

The investment trust was the first block in a pyramid of investment trusts each with cross holdings in the other, and each larger than the last.
There was little or no diversification between the trusts, which often shared directors and leveraged their rising share prices.

At first, it worked splendidly: The share prices of the investment trusts all rose together. However, by October 1929 sentiment among investors had changed for the worst and prices plummeted. Shares in the Goldman Sachs Trading Corporation which had traded at $2.22 per share, at their peak, collapsed to just 1.75 cents per share.

The collapse of FTX has been well documented. And as David has pointed out it bears a close resemblance to the issues that dogged FXCM , which at the time was one of the world's largest FX brokers.

But it also reinforces the idea that nothing good ever came of a structure or trade that is nested - one with an embedded recursion of feedback loops.

The phrase there is nothing new under the sun can be traced back to the bible and even to Hebrew scripture before then. You would think in those 2000-odd years we might have learnt our lesson, but as events have shown us this week there are plenty of people who are only happy to repeat the mistakes of the past.

(Just in case you were wondering if it's tough to spot recursions in the real world, you only need to be as smart as a crow...) 👇

Crypto is dead. Long live crypto. What comes next?

FTX is not Lehman - here's why.

Over the last week or so, I've seen a TONNE of posts describing the FTX disaster (and that is what it is, a fraudulent, unmitigated and damning disaster) as a 'Lehman Moment'. I think there's a few reasons why people are referencing this, but it's wrong.