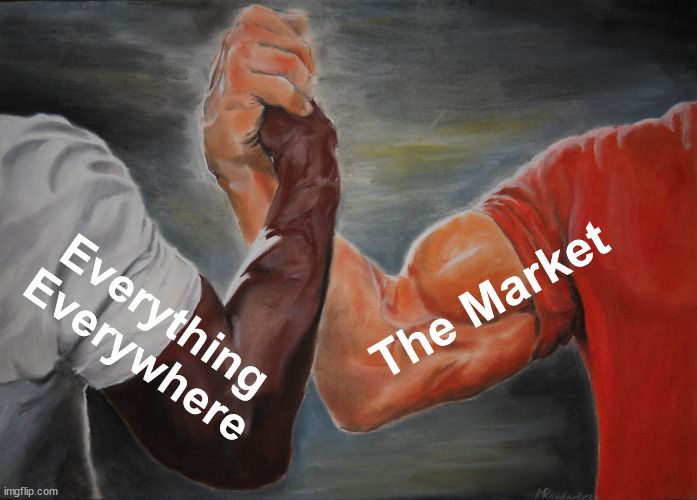 Two arguments dominate the marketplace of ideas about markets.

Free markets are to blame for all of the world's problems. Or globalisation. Or greedy speculation. Or plain old capitalism.

Governments should do more to fix this.

The world's in a state because society has gone soft, too busy complaining about minor irritations while taking for granted the modern comforts that capitalism has bestowed upon us.

Irresponsible green policies, identity politics and pandering prove that governments should do less to fix things. Libertarianism is the answer.

Whichever way you look at it, the solution is always presented as obvious.

Burn It The F**k Down (BITFD) and start again

Of course... It's not that simple.

Crypto was the great hope for a new monetary system that would rise up from the ashes. For hardcore believers it still will be.

However, students of history point out that we've tried many of these things before. Today's system is the product of thousands of economic experiments (failures?)...

With advances in information and communication technology—not the least of which is the ability to embed a wafer-thin computer chip into the equivalent of a credit card—it seemed certain that a new form of private money, “electronic money,” would arise as an alternative to paper money and coins in everyday transactions.

More importantly, the inadequacy of cash as a method for making payments in the growing world of electronic commerce seemed to lay the foundation for the emergence of electronic money.

But so far, we haven’t seen electronic forms of private money emerge as anticipated. Why not? Our historical review holds a clue.

All of the different problems private money and scrip emerged to solve can be seen as problems with liquidity—liquidity problems that the official, government-supplied money of the day did not meet.

And so it has been in many corners of crypto. The failure of Terra was a liquidity problem. 'The market' sniffed that out. As the author of that 2007 paper tells us, nobody cares about your algorithm if they don't believe in the backing... 👇

Many private issues of money were unsuccessful because people did not believe the issuer would honor its original intentions to redeem it in dollars or goods or services. Such experiences teach us that the perceived backing of private money is intimately linked to its success or failure.

Proof-of-stake and proof-of-work type applications could yet come into their own as crypto matures.

Shout out to Macrodesiac partner Syscoin, going from strength to strength. 💪 👇

TL;DR Instead of rushing to BITFD, pay attention to history and see what has and hasn't worked before. It's uncomfortable, but you can't help but notice some things when you do. For example...

Generally speaking, governments have a lot less control of the everyday than most people are comfortable believing.

They DO have influence at times of deep stress, but the daily reality is very different from the top-down or centrally-planned approach (government sets policy, markets follow) that you implicitly have to believe in if you want to argue that governments are to blame for doing too much or not enough.

Society (The Market) Sets The Prices

Sounds simple, but people seem to have forgotten some of the basics in their clamour for a 'fairer' world.

This was a perfect example... 👇

"There were five people, and everyone was pretty much contributing the same,"

"So we tried this experiment where we paid each of us an equal amount of money - regardless of experience, regardless of role. We wanted to challenge the traditional model of pay. We decided on £36,000 a year for everyone. We calculated that was a decent living wage for London."

It worked well at first (the clue's in the first line). But as time went on, the law of unintended consequences kicked in. Unsurprisingly, paying the same for clerical roles as they did for software developers didn't work out...

"I think it was a disappointment when the experiment failed. We wanted to do something which was democratic and egalitarian. But sometimes traditional practices are there for a reason. Sometimes you don't have to reinvent the mould on everything."

The market value of labour in different roles caused the equal pay policy to fail.

Markets aren't perfect (far from it), but they're the best pricing and feedback mechanism we've found so far, and it applies to pretty much everything...

Even as globalisation continues to be criticised for "putting profits before people", we can rest assured that 'markets' will figure this out over time too.

Pettis argues that globalisation has...

optimized financial outcomes, and often at the expense of economic outcomes. It allowed and encouraged the repression of workers' income relative to productivity, and this hurt not just the bottom half of the income distribution but the overall economy.

Among other things it kept demand weak and ensured that the only way to keep growth steady has been through a surge in household and fiscal debt. The global surges in income inequality and debt are direct consequences of financial globalization.

In that case reversing globalization doesn't make things worse. It prevents them from getting worse. Obviously this isn't the case for the great beneficiaries of globalization, but their financial interests don't necessarily overlap with the world's economic interests.

The economy strikes back?

Clsoing out, even as the academics at Davos pontificate about the future and Forging Multistakeholder Partnerships for Radical Climate Action (among other things), markets will ultimately decide if this agenda is worthwhile.

Ideas are ten a penny in any case. It's the execution of those ideas, over time, that can change the world.

Now, this isn't to say that markets deserve to be deified. But they don't deserve to take the blame for every idea that fails, or every single thing that goes wrong in society either.

Markets are, after all, merely the product of millions of flawed humans making decisions... Including us, every time we buy or sell anything.

(time, attention & expertise are all part of the economic machine, alongside the more obvious things such as food and energy)

As Oscar Wilde said, the cynic knows the price of everything and the value of nothing.

If you don't understand the value of markets, you're not paying attention.

Everyone's a gambler. But there's a big difference between those that do it deliberately and those that don't.