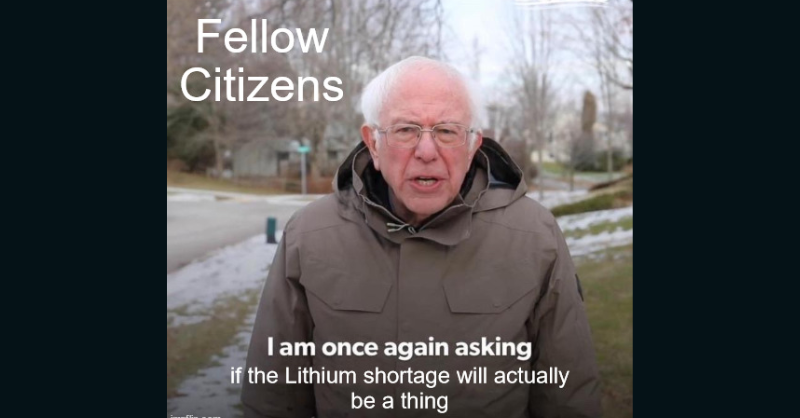 🔔 The Lithium Shortage That Never Was

When Mr Lithium talks, we all need to listen. The clue's right there in the name. 👇

There's been no shortage of concerns about shortages. Especially when it comes to the metals required for the energy transition, electric vehicles, and all the rest of it.

So it is with lithium... For now at least.

Back in April, Elon Musk was warning that battery production, and specifically lithium, was the fundamental limiting factor for electric vehicle adoption worldwide. He encouraged everyone to pile in and take advantage.

“We think we’re going to need to help the industry on this front.
I’d certainly encourage entrepreneurs out there who are looking for opportunities to get into the lithium business. Lithium margins right now are practically software margins.”

Elon's not Mr Lithium though. That honour goes to Joe Lowry, a man I wish to emulate purely so I can be characterised like this in a Bloomberg article 👇

One person who’s been warning of a lithium shortage for a while is Joe Lowry, a somewhat cantankerous expert who regularly draws mining bigwigs and analysts to his podcast. Known in mining circles as “Mr. Lithium,” the North Carolina resident has been in the business for decades.

Anyway, those predictions have been bang on so far. There's been no let up in the lithium bull market. The metal's up roughly 180% year to date. 👇

The price jump seen in 2022 was attributed to the stark contrast between rapid growth of new energy vehicles sales and longer construction cycle of mineral resources.

What's next? The output from salt lake producers will slow down when winter arrives. However, production is expected to remain robust during the traditional peak season in the fourth quarter. This will likely keep lithium salt prices moving up. Some market sources said lithium carbonate prices could breach Yuan 600,000/mt by the end of 2022.

Maybe prices can go higher, maybe they can't, but seeing multiple articles about a 'White Gold' rush on a commodity that's already +180% for the year (and using new production to highlight the interest) is a strong sign that the trend is, ahem, well matured. 👇

Nicholas Snowdon, metals strategist at Goldman Sachs, told a panel discussion examining the lithium market that "it's nonsense to think that lithium will remain the same as it is now"👇

"Lithium has been in strong deficit for two years but will move into a situation of good supply by 2025. We'll see a substantial correction over the next two years."

However, Mr Lithium didn't think that supply growth would be enough to meet demand 👇

In the next two years, even though there will be significant growth in supply, it will be less than demand, so the gap will just continue to grow.

I believe there will be a day in the future when lithium is in oversupply, but it won’t be in this decade.

Limited supplies of lithium are a problem for the development of other energy storage solutions. One major problem with renewables such as wind and solar is their intermittent output and our inability to efficiently store the energy they generate, especially at scale.

Even if it's really sunny or windy on a given day, solar or wind energy that can't be used immediately is simply lost. There just aren't enough batteries (or battery materials).

But maybe, just maybe, there could be a solution in the works 👇

Professor Donald Sadoway, Professor Emeritus of Materials Chemistry at MIT (and already co-founder of one battery company: Ambri) "wanted to invent something that was better, much better, than lithium-ion batteries for small-scale stationary storage, and ultimately for automotive [uses],”

Embracing the true spirit of innovation... 👇

He discovered that aluminium (ah loo min ee um for American readers) could be combined with sulphur and widely-available salts to create a pretty good battery that charges ridiculously fast, and it doesn't have those pesky dendritic shorting problems we've all heard so much about. /s

“It’s funny because the whole focus was on finding a salt with the lowest melting point, but the catenated chloro-aluminates they ended up with turned out to be resistant to the shorting problem.

“If we had started off with trying to prevent dendritic shorting, I’m not sure I would’ve known how to pursue that. I guess it was serendipity for us.”

It's a positive development, but still early days. As Sadoway puts it, “the first order of business for the company is to demonstrate that it works at scale” and then test the battery across a load of charging cycles to really put the technology through its paces.

Aluminium (the most abundant metal on Earth) might not be a direct replacement for lithium across all uses, but it can reduce the competition for lithium, especially if the energy density of aluminium batteries improves as anticipated.

In summary, this technology still requires continued advances on multiple fronts, which should be achieved at a low cost to maintain the overall cost-competitiveness of Al-S batteries.

However, given recent achievements in somewhat similar Li-S batteries and ongoing discoveries of battery materials and electrolytes accelerated by machine learning, there is an expectation that Al-S batteries will realize their cost-effective potential and enter large-scale deployment.

Even if this isn't 'the one', the sheer amount of brainpower and resources being pumped into battery tech will surely yield positive results in coming years.

Japan's intervening again. Did you catch THE trade? You know, the 150 trade. The level that EVERYONE was watching...