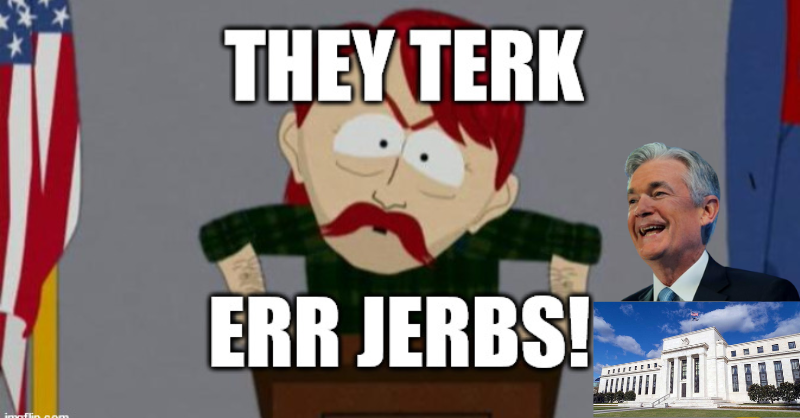 🔔 The Labour Market's Too Strong - Let's Sacrifice It

The employment picture in the US is still strong, despite reports to the contrary. Here's what that means for the Fed...

Right, let's kick off with the JOLTS data from June (released yesterday). Job openings fell to a paltry 10.7 million...

Here's what that looks like in a couple of charts 👇

There are now 605,000 fewer jobs available than there were last month. But the jobs couldn't be filled anyway, so, frankly, who cares?

All told, not much has changed. The report could be summed up by saying that the workers who want to switch jobs have fewer choices.

Nevertheless, conclusions are being leapt to.

And there are some big old question marks around these conclusions.

Mentions of lay-offs are rapidly on the rise (BofA)

The biggest issue with this? What are those mentions? Of the earnings transcripts I've read, most of the mentions are addressing questions about layoffs.

Usually, companies confirm that they're NOT planning layoffs. Many are 'slowing hiring', but they're STILL HIRING.

Even if there are layoffs, is it that hard to get another job when 4.2 million workers chose to quit their jobs (and presumably switched to new ones) last month alone...?

Well, apparently the US is already in a recession. And is it even a fair comparison considering the sheer number of job openings? 👇

Even though some of the least productive, least profitable firms (especially those with TERRIBLE business models) are reducing headcounts...

...that's just a tiny drop in the ocean. Sacking one in four staff sounds like a lot. Sacking 780 people doesn't. Especially not in the context of the enormous US jobs market.

One thing that Powell mentioned in the press conference really caught my attention.

Historically, there have been multiple negative GDP quarters that didn't amount to much due to strong employment. Basically, negative GDP growth for a quarter or two which the economy just sailed right through before growing again.

In fact, he mentioned strong employment multiple times. It's a lagging indicator, and when employment finally starts to go, that's when the business cycle is truly ending.

Bear in mind that the economy added 2.7 million jobs in the first six months of 2022.

Now, the US is currently beyond that point with a 3.6% unemployment rate.

And now there's even more debate among economists, academics and the Fed about the possibility of engineering a soft landing (bringing down inflation without killing the economy & labour market). 👇

Readers of this newsletter may recall that the argument was you can’t just rely on a tumble in job openings to alleviate wage — and thus inflation — pressure.
“Empirical evidence” shows that’s never happened before.
You essentially have to drive people out of jobs, too.

Waller and Figura begged to differ, in a rebuttal paper released Friday.

As Craig Torres wrote here, they cautioned not to assume that past is prologue, because of how unusual the economic developments during the pandemic have been. Their takeaway: it’s possible to slow the economy, prompting employers to cut back on job openings, without a major surge in unemployment.

“We recognize that it would be unprecedented for vacancies to decline by a large amount without the economy falling into recession,” the Fed economists said. “We are, in effect, saying that something unprecedented can occur because the labor market is in an unprecedented situation.”

So, if you're finding the current macro environment hard to interpret, take comfort in the fact that nobody else has a f**ing clue either. Everything's unprecedented...

There are definite cracks in the employment picture, but it's way too soon to conclude anything with any degree of confidence.

To illustrate (and annoy the academics), let's toss a New Zealand sized grenade into the mix.

So even with unemployment increasing, a tight labour market means companies want to keep hold of staff. It certainly doesn't mean an immediate drop in wages...

Companies such as Lloyds & Rolls Royce are even giving staff extra 'cost-of-living' payments.

“The award enables those employees to share in our current operational and financial success. It is not a response to inflation or cost-of-living challenges.”

Even though we may see some short-term inflation relief, and it's also likely that we'll see a few more cracks emerging in an incredibly strong labour market, we're a long way from the kind of weakness that could prompt a proper Fed pivot.

We've been here before, but the case is getting stronger for an inflation peak. It's a long way back and won't happen overnight...

Tempting as it is to just block them out and completely ignore politics, these chimps (we'll come to it) pass and block laws that can have enormous impacts on markets.