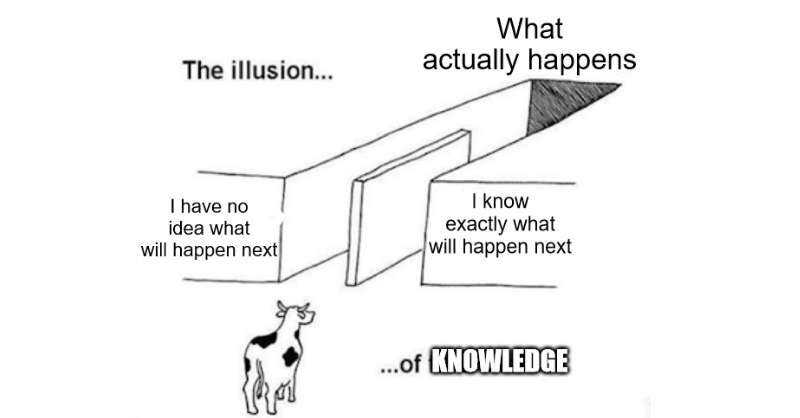 "No amount of sophistication is going to allay the fact that all of your knowledge is about the past and all your decisions are about the future" – Ian H. Wilson (former GE executive)

You may already know this but I love Howard Marks. He's been there, done that, got the T-shirt, re-sold the t-shirt at auction, and then done it all again. Yet he's still humble enough to admit that, a lot of the time, he has no idea what's going on.

Maybe 'no idea' is a bit strong. But he definitely steers away from predictions and forecasts.

In the world of finance, there's an omnipresent pressure to know the future.

Because there are two things that most people are buying from Wall Street.

The stories part is self-explanatory. Everyone wants to be involved with the next big thing. It's the other side that's more insidious, hidden as it is, under the surface of fancy models, historical analogues and PhD's.

But really, the certainty product is split in two. In one section is the illusion of certainty. In the other, the liberation from personal responsibility.

(Got to give the people what they want, and management fees are payable irrespective of results)

In his latest note, The Illusion of Knowledge, Marks tells a familiar tale...

I attended a lunch with a number of experienced investors, plus a few people from outside the investment industry...

At one point, the host posed a series of questions: What’s your expectation regarding inflation? Will there be a recession, and if so, how bad? How will the war in Ukraine end? What do you think is going to happen in Taiwan? What’s likely to be the impact of the 2022 and ’24 U.S. elections?

I listened as a variety of opinions were expressed.

Regular readers of my memos can imagine what went through my mind:
“Not one person in this room is an expert on foreign affairs or politics. No one present has particular knowledge of these topics, and certainly not more than the average intelligent person who read this morning’s news.”

None of the thoughts expressed, even on economic matters, seemed much more persuasive than the others, and I was absolutely convinced that none were capable of improving investment results. And that’s the point.

It was that lunch that started me thinking about writing yet another memo on the futility of macro forecasting.

So he did. It should be required reading for anyone involved with markets, as should everything else he's written (Did I mention I'm a fan?).

But now more than ever, with so much uncertainty in the world, so much change happening all at once, the seductive pull of those forecasters with their comforting predictions and overlays is as alluring as that ex you have 'unfinished business' with. And they're recently single. Why did we break up anyway?

False hope and false certainty are cut from the same cloth. Uncertainty is all there is, as certain as taxes and death...

So... forecasting is futile 👇

Forecasters have no choice but to base their judgements on models, be they complex or informal, mathematical or intuitive. Models, by definition, consist of assumptions: “If A happens, then B will happen.”

In other words, relationships and responses. But for us to willingly employ a model’s output, we have to believe the model is reliable. When I think about modelling an economy, my first reaction is to think about how incredibly complicated it is.

The U.S., for example, has a population of around 330 million. All but the very youngest and perhaps the very oldest are participants in the economy. Thus, there are hundreds of millions of consumers, plus millions of workers, producers, and intermediaries (many people fall into more than one category).

To predict the path of the economy, you have to forecast the behaviour of these people – if not for every participant, then at least for group aggregates.

A real simulation of the U.S. economy would have to deal with billions of interactions or nodes, including interactions with suppliers, customers, and other market participants around the globe.

Is it possible to do this? Is it possible, for example, to predict how consumers will behave (a) if they receive an additional dollar of income (what will be the “marginal propensity to consume”?); (b) if energy prices rise, squeezing other household budget categories; (c) if the price for one good rises relative to others (will there be a “substitution effect”?); or (d) if the geopolitical arena is roiled by events continents away?

Clearly, this level of complexity necessitates the frequent use of simplifying assumptions. For example, it would make modelling easier to be able to assume that consumers won’t buy B in place of A if B isn’t either better or cheaper (or both).

And it would help to assume that producers won’t price X below Y if it doesn’t cost less to produce X than Y. But what if consumers are attracted to the prestige of B despite (or even because of) its higher price? And what if X has been developed by an entrepreneur who’s willing to lose money for a few years to gain market share?

There is one little thing that I disagree with him on. I don't think forecasting is entirely futile.

The process of trying to humbly forecast the future can produce probabilities, or tendencies. For example, the probability of an entrepreneur being happy to lose money to gain market share is probably lower in an environment of higher interest rates than it has been in the ZIRP era.

But that doesn't mean we can forecast anything about the future. One year ago, current interest rates were unthinkable.

How about this guy who thought the Fed were pulling off a 'soft landing' in February 2007...

Nobody knows everything. Nothing is certain and anything can happen...

Have a read of Marks' full note (and Morgan Housel's excellent article he references too). Solid gold. 👇

Does inflation really hurt the poor most? "Our understanding of inflation is not helped by a world increasingly dominated by sound-bite economics"

Markets go up and down, fortunes are made and lost. Everything is cyclical. King Charles says we need a bull market in critical thinking.