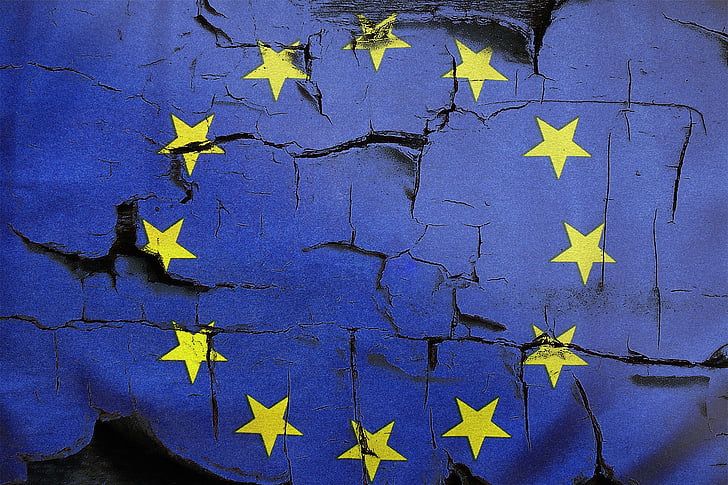 Those were the words of Charles Michel back in July.

The President of the European council oversaw four days of tense negotiations between EU leaders until an agreement was finally reached on a €1.82T combined budget and coronavirus recovery package.

There's no doubt that this agreement was a significant achievement, but he really should have stopped at "we did it".

Europe is far from strong or united...

If anything, these negotiations exposed the divisions and (once again) laid them bare for all to see.

Four days locked in a room (I presume it had to be locked) with the eyes of the world on them was the easy part.

The hard yards lie ahead.

A line from the FT report captured the moment perfectly.

Splits had to be overcome through a complex patchwork of compromises.

This is nothing new for the EU.

In fact, that line sums up their entire history.

Nonetheless, the media furore subsequently died down (as the deal was 'done'), but it is sure to ramp up again over the coming weeks and months.

The German ambassador to the EU, Michael Clauss, shared his concerns with Reuters yesterday;

“I am very concerned that the negotiations are currently progressing too slowly. We must increase the frequency of negotiations significantly. We have offered the European Parliament to negotiate through the weekends as well,”

The ratification process will run into familiar issues;

On the economic front,

The frugal four (previously known as the frugal five, until Germany left the club recently) will face off against

The "friends of cohesion"

(In the good old days it was the "Southern Sinners"; a much better name)

Anyway, the frugals want to stay frugal, while the cohesioners want to get as much funding as possible.

There are various sub-tribes within all of this too.

This Politico article is a good read on that front;

There is also the "rule of law" debate, which is already proving a thorny issue.

Essentially, July's agreement included an 'emergency brake' clause that would allow any member government to object to another's planned spending of recovery funds.

However, this clause is very ambiguous.

"We really need a direct link between EU funding and adherence to the principles of rule of law,"

"This is more than only protecting the budget against fraud and corruption,"

They are both already under EU investigations for their.... 'authoritarian tendencies'.

They fear the funds could be used as political leverage, and Hungary has already informed the European Parliament that it will not ratify the recovery fund without binding reassurances on the matter.

Both the 1.1 trillion euro 2021-2027 budget and the 750 billion recovery package still have to be agreed unanimously by the 27 EU nations.

As things stand, the entire package is pending approval by the European parliament, the national governments and some regional administrations.

There's a lot to get done, and a short time to do it.

Euractiv published a good outline of the bureaucratic process ahead.

EU leaders agreed in July to fast-track 10% of the funds assigned to member states as a pre-financing before they start implementing their investment and reform plans. But in order to channel the funds, the Recovery and Resilience Facility must be ready, as it will mobilise the bulk of the recovery fund, a total of €672.5 billion.

The Commission hopes that the Facility will be ready by 1 January 2021.

That would allow for some procedural steps needed for the member states to access the funds, primarily the approval of their national reform and investment plans.

National governments must submit their plans by the end of April next year at the latest, although they could hand them in already by 15 October, together with their draft budgetary plans for 2021.

Governments will prepare their plans with the Commission, which must approve them within two months. EU officials admit that their preparation, including the milestones member states must achieve to unlock the funds, will be a “very tedious work that will take some time”.

For that reason, almost all member states have already contacted the Commission in order to start preparing their investment and reform proposals.

The national plans must be also approved by the EU finance ministers by qualified majority.

National plans could be ready and approved by spring next year. The Commission hopes to have concluded the own resources ratification by then so it could borrow from the markets and transfer the money to the member states swiftly.

The Commission will disburse the recovery and resilience funds twice per year. However, it is unclear whether next year there will be also a second transfer to member states, following the first pre-financing payment.

Many European nations operate with minority or coalition governments, so there will be plenty to negotiate and disagree on before settling on a proposal.

That proposal then needs to align with the EU's objectives too.

In addition, the Commission will also take into account to what extent the national plans contribute to the progress on the EU’s ‘green’ and digital objectives, support sustainable growth, create jobs, and mobilise investment.

They include future-proof clean and renewal energies; energy efficiency in buildings; clean and smart transport; rapid broadband services (including 5G); the digitalisation of public administration; industrial data cloud capacity and cutting-edge processors; and the adaptation of the education systems for the digital age.

Summing up, there are plenty of legal and economic hurdles to overcome before the fund and budget can be fully ratified, and begin disbursing the economic support.

This story is likely to float in and out of focus during the coming months, and depending how severe the disagreements are, European credit spreads (and the euro) could once again come under pressure.

FINALLY. I get to use a clickbaity title and accompany it with a overindulgent (but excellent) thumbnail... Living the dream.

Robin Williams in 2009, talking about the banks and their liquidity addiction. But this time it's different.Shhh, it actually