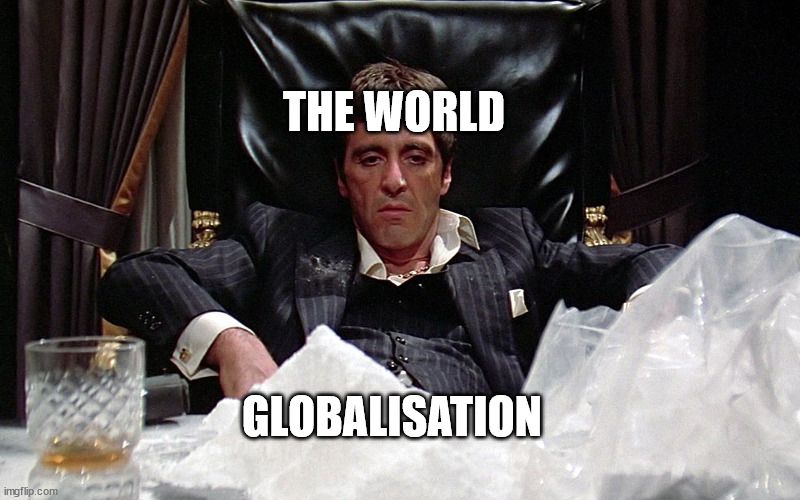 🔔 The End Of Globalisation

"The end of globalisation" makes for an excellent soundbite, but does it actually mean what everyone thinks it means?

So, it's the end of globalisation. Larry Fink said so 👇

The Russian invasion of Ukraine has put an end to the globalization we have experienced over the last three decades. We had already seen connectivity between nations, companies and even people strained by two years of the pandemic.

So did Olaf Scholz 👇

"I assume that the phase of globalisation is over during which everything is cheap because only a small part of the market is being served by the rest of the world,"

"The progress of the last 30 to 40 years was also that many countries have caught up so much that they are now also customers competing with us for scarce goods,"

And the BIS' Agustin Carstens 👇

Looking even further ahead, some of the structural disinflationary winds that have blown so intensely in recent decades may also be waning.
In particular, there are signs that globalisation may be retreating.

Should the retreat from globalisation gather pace, it could help restore some of the pricing power firms and workers lost over recent decades.

You get the idea. Globalisation is DEAD, game over, the END. Thanks for playing.

But that all depends how you define globalisation.

If you define it the simple way like Google & Wikipedia...

the process of interaction and integration among people, companies, and governments worldwide involving goods, services, data, technology, and the economic resources of capital.

Then that's not ending any time soon.

The exact form that it takes, and who's best friends with who might shift around a bit, maybe even a lot. Ultimately though, globalisation is generally in everyone's interests and it will continue.

Economic globalisation is the rising tide that lifts all boats. But there are limitations. The US-China relationship is an obvious example.

China became the factory of the world, a cheap place to manufacture pretty much everything.

The US is the biggest consumer.

Cheap Chinese labour meant US factories couldn't compete, so US manufacturing was increasingly off-shored to China.

Basic take: China makes things. The US consumes them.

Some say this has made the US completely dependent on China, in much the same way as the EU naively became dependent on Russian gas.

In reality, they're both dependent on each other. That's what trade is. If a trade relationship ends, everyone loses.

Now, relationships change over time, but that doesn't mean they have to end. Kind of like marriages (unless one of you does something unforgivable).

But the idea that globalisation is changing or has peaked "for a while" is definitely one to consider.

Howard Marks' "The Pendulum of International Affairs" is excellent on this.
Here's a snippet 👇

It’s my belief that because both free markets and regulation are imperfect – and because of the strength of people’s political and philosophical biases – we will never settle permanently on either a completely free market or a thoroughly regulated system.

Any position will prove merely temporary, and the pendulum will continue to swing toward one end of the spectrum and then back toward the other.

If you substitute the words “offshoring” and “domestic sourcing” for “free markets” and “regulation,” then this passage just as accurately describes the choice between the cheapest sourcing and the most secure sourcing.

This absence of perfect, permanent solutions is characteristic of pendulums – it’s why they swing. And after many decades of globalization and cost minimization, I think we’re about to find investment opportunities in the swing toward reliable supply.

And perhaps this latest swing will, as the BIS suggest "restore some of the pricing power firms and workers lost over recent decades".

Which means adaptation. That could be harder for some than others.

Looking at you Germany.

See, if you ask why German industry is competitive globally, a couple of the core components are under threat. Here's one 👇

And cheap labour just isn't as cheap as it used to be.

"...as the supply boom of cheap labour (e.g. China, Eastern Europe) comes to an end and the bargaining power of labour returns..." 👇

Summing up, we're likely to see SOME re-shoring of critical industries (especially where globalisation has gone 'too far') & a greater reliance on domestic energy production where possible.

It won't happen overnight, but that pendulum is definitely starting to move toward a new equilibrium.

🔔 I'll Pay You Back Later

Why I like PMI's & why you shouldn't move stops to breakeven