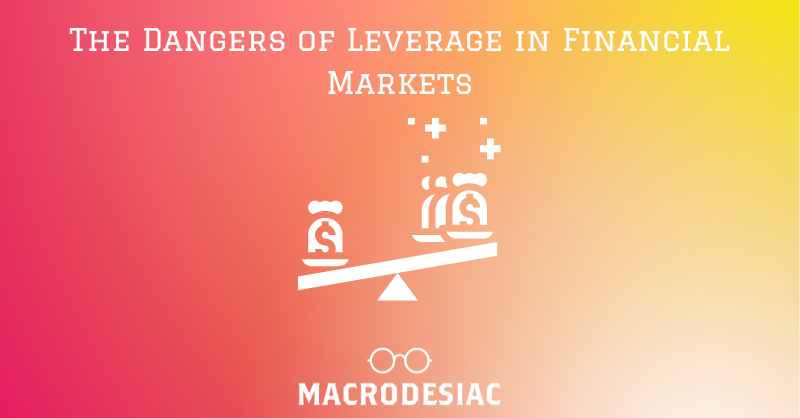 The Dangers of Leverage in Financial Markets

Leverage in financial markets can be a bad thing because it increases the potential for large losses. Leverage magnifies any potential gains or losses that may occur in an investment.

Therefore, if an investor takes on too much leverage, they could potentially be exposed to a large loss if their investments move against them. Additionally, since leverage involves borrowing money to finance investments, it can create added financial risk.

Leverage should be used with caution and careful consideration should be given to the potential rewards and risks of leveraging an investment.

LTCM is a prime example of why leverage can be bad. Long-Term Capital Management (LTCM) was a hedge fund that used a high amount of leverage. The fund bet on the spread between U.S. Treasury bonds and various other bonds. When the spread narrowed unexpectedly, it triggered a large loss for the fund due to its high degree of leverage. The fund eventually had to be bailed out by a consortium of banks to prevent total market collapse.

But lessons weren’t learnt because a decade later, in 2008, the collapse of the U.S. housing market triggered a financial crisis that was exacerbated by poor governance and financial engineering tools such as derivatives and structured products. The crisis revealed the potential dangers of excessive leverage and complex financial instruments.

After the GFC, governments and regulators began to take measures to reduce systemic risk by implementing new regulations that limited the use of leverage, increased disclosure requirements and improved corporate governance.

For example, the Dodd-Frank Wall Street Reform and Consumer Protection Act of 2010 established the Volcker Rule, which prohibits banks from engaging in proprietary trading, limits their ability to invest in private equity and hedge funds, and sets restrictions on their use of leverage. In addition, the Basel III regulations require banks to hold stronger levels of capital, in order to reduce the potential that leverage can cause a bank to become insolvent.

But there are critics of Basel III mainly because it doesn’t actually limit leverage but rather requires banks to hold more capital when they are using leverage. Therefore, there can still be extremely high levels of leverage in the system with Basel III in place.

In addition, it means the holdings of sovereign bonds by central banks and large institutional investors remain large because of Basel III since they are the most liquid and ‘safe’ form of capital that still provides a return. This increases the risk of contagion, since if one large holder of sovereign bonds fails, it could lead to a cascade of losses, which would put added pressure on banks who are financing the investments and also governments.

For example, risk weights of sovereign debt in Europe are still very low, even though the underlying risks have increased significantly due to rising debt levels and possible default risks. This means banks are taking on more risk than they should be, while still being able to use leverage, creating a potentially dangerous situation.

In 1995, Barings Bank, one of the oldest and most prestigious merchant banks in the UK, was brought down by the actions of its trader, Nick Leeson. Leeson had been trading on the Singapore International Monetary Exchange, speculating on certain futures contracts, with the intention of making money for Barings. Unfortunately, his dealings caused massive losses totaling over £827 million. The bank was unable to make up the losses and was declared insolvent.

Leeson was arrested in Singapore in 1995 and sentenced to six and a half years in jail. He was released after four years due to good behavior. After his release, he wrote a book about his experiences and was the subject of a movie called 'Rogue Trader.'

When it comes to debt, Orange County, USA, is no exception. In 1994, Orange County suffered a financial crisis that would become known as the Orange County bankruptcy. After spending heavily on investments, the county was unable to service its obligations and it was forced to default on several bonds. The default was the largest municipal default in U.S. history and sent shock waves throughout the U.S. financial markets. In the wake of the crisis, the county was forced to implement severe austerity measures, including widespread layoffs, cuts to services and an increase in taxes.

In 1993, Metallgesellschaft was a German oil trading and refining company that was a major competitor in Europe's oil refining industry. The company had been profitable for decades and had strong cash flow and assets. However, in December 1993, the company announced that it had gone through a series of “speculative” trades which had resulted in a loss of around $1.3 billion. This was largely due to a derivatives trading strategy that was set up to hedge against the falling price of oil.

The firm then had to be rescued by its parent company, Deutsche Bank, in order to avoid bankruptcy. Deutsche Bank initially provided a rescue package of €1.2 billion to cover the losses, but further losses were incurred due to the value of the company’s assets declining over time. As a result, Metallgesellschaft was effectively liquidated in 1997, and its remaining assets were sold off to pay off its debts. The downfall of the company is widely considered to be one of the biggest financial disasters of the 1990s.

The collapse of Bear Stearns, one of the largest investment banks in the United States, occurred in March 2008. The company was unable to meet its obligations due to the subprime mortgage crisis, which was caused by a downturn in housing prices, increased foreclosures, and resulting doubts about the value of mortgage-backed securities. Bear Stearns had significant exposure to mortgage-backed securities, so the crisis caused its value to drop quickly.

On the weekend of March 16 and 17, 2008, the Federal Reserve, along with JPMorgan Chase, arranged a merger with Bear Stearns to keep the company afloat. The Fed also loaned $30 billion to the merger, reducing the risk of the deal for JPMorgan Chase. However, the merger still resulted in heavy losses for investors. Shareholders of Bear Stearns saw their shares drop from a high of $159 in January of 2008 to just $2 per share when the merger was announced. The fall of Bear Stearns was a major event in the subprime mortgage crisis and a significant part of the Great Recession.

Lehman Brothers was another casualty of excessive leverage that we’re all familiar with.

In September 2008, the 158-year-old investment bank filed for bankruptcy, resulting in the largest bankruptcy of any financial institution ever in US history. The event had a drastic impact on global markets, sparking a ‘credit crunch’ as institutions around world stopped lending to one another which dried up liquidity for firms.

The primary cause of Lehman Brothers' downfall was its over leverage. In essence, the firm was 'betting' on derivatives unintentionally, Lehman Brothers had become a "shadow" bank, operating beyond the regulation of formal banking institutions. As the 2008 financial crisis worsened, that leverage meant that Lehman Brothers was unable to generate enough profit from its investments to make up for mounting losses.

The combination of these factors, as well as a lack of adequate regulation and supervision, led to the firm’s ultimate collapse. After filing for bankruptcy, its assets were sold to various entities.

Amaranth Advisors was a multi-strategy hedge fund founded in 2006 by former Deutsche Bank energy trader Brian Hunter. At the time of its launch, Amaranth Advisors was one of the largest hedge funds in the world, with over $9 billion in assets under management. However, in September 2006, the firm suffered significant losses following bets it had placed on natural gas futures contracts.

These losses ultimately led to the firm's collapse, with the remaining assets being liquidated in early 2007. The collapse of Amaranth Advisors has served as a cautionary tale for other hedge funds, as the firm's investments were not diversified and were ultimately too risky. Furthermore, the losses highlighted the importance of proper risk-management strategies when investing in financial markets.

Refco was a global financial-services company that became insolvent in 2005. It failed due to fraudulent activities committed by the company's former CEO and CFO, Phillip R. Bennett. Bennett hid approximately $430 million in debt owed to Refco by trading it through a company controlled by him. This deception allowed Refco to mislead investors and regulators about its financials, leading to its ultimate collapse.

Peregrine Financial Group, Inc., commonly known as PFGBest, was a futures commission merchant (FCM) that formerly provided services to investors worldwide. It was based in Cedar Falls, Iowa. In July 2012, the National Futures Association (NFA) revealed that PFGBest had misappropriated most of its clients' funds and declared the company insolvent. On July 10, 2012, CEO Russell Wasendorf Sr. attempted suicide by carbon monoxide poisoning near the company's headquarters. In October 2012, Wasendorf was sentenced to 50 years in prison for the fraud.

The fraud was largely the result of a lack of regulatory oversight by the NFA. PFGBest had falsified financial documents and engaged in a variety of fraudulent activities including siphoning off funds, creating false financial records, and using customer funds to pay for luxury vehicles and other personal expenses. As a result of PFGBest’s fraud, many investors lost their life savings, and thousands of traders were affected. In an effort to make restitution to victims of the fraud the U.S. Commodity Futures Trading Commission (CFTC) established a restitution fund for victims of the fraud. The fund, named the PFG Customer Restitution Program, was managed by the NFA and had a total of $217 million made available to victims.

The MF Global financial scandal was a major scandal involving the mismanagement of customer funds by former CEO Jon Corzine and other executives of the now defunct MF Global. In October 2011, MF Global filed for bankruptcy protection during the aftermath of a series of disastrous positions taken by Corzine on highly risky European sovereign bonds and derivatives. MF Global's clients lost an estimated $1.6 billion as a result of the firm's bankruptcy. The firm had misused customer funds by transferring funds out of segregated accounts without customer authorization.

But there are pros of leverage too

Leverage can also be beneficial when used in the right type of investments and with appropriate levels of risk management. For example, a small business might use leverage to expand its operations or have access to capital for research and development. Or an investor might use leverage in the form of margin to increase their buying power when investing in stocks, commodities or other assets.

Leverage also means you don’t have to hold as much capital with your broker.

Legendary investor Warren Buffett has consistently warned of the dangers of leveraging investments.

He has said “leverage is like a knife. It can be wielded to enhance one's prospects, but it can also be a crippling liability if carelessly handled.” And he has said “borrowing money to buy stocks is asking for trouble in most cases.”

'Leverage amplifies risk and can be costly. There is no substitute for knowledge, understanding and experience.'

So, in summary, leverage in financial markets can be a bad thing as it amplifies losses and can be potentially dangerous if used without adequate risk management. It can put an investor in debt quickly and can lead to larger losses than expected. On the other hand, it can also have some benefits if used with appropriate levels of risk management - so ALWAYS be mindful of how much leverage you are using.

Real yields provide a clearer picture of the returns investors can expect from an investment. By stripping out the effects of inflation and removing any time-value distortion of money, real yields more accurately reflect the actual rate of return you will earn.