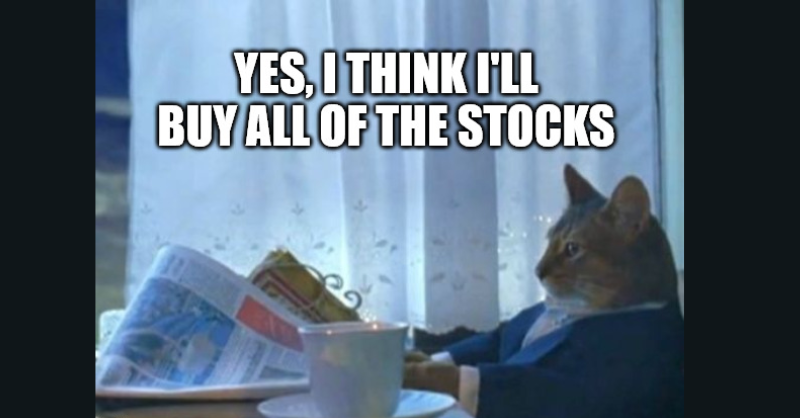 So with that in mind and with the wheels appearing to come off in some corners of the market what else is there to write about?

Well... how about why now might be just the time to think about getting long of equities again?

I know, I know. We were chatting about this in the Macrodesiac discord yesterday, and there are a few reasons to think a bounce could be due. Now I should make it quite clear that I remain risk-off and think that stocks can head lower simply because the tail end of a large move is often characterised by an overextension.

That doesn't mean that we shouldn’t be prepared for a rally though. After all, both JP Morgan and Goldman Sachs wrote today about the potential for a rally in growth stocks.

“That said, the discount of Value versus Growth in Europe is now back at extremes. History suggests that when a sector is in the 20th percentile or below its long-term relative valuation, it tends to outperform over 6-month, 1-year and 3-year periods; the opposite holds for sectors trading above their 80th percentile.”

Now that Growth, and Tech, have traded back down though, there could be an opportunity for another tactical bounce in Growth, similar to what we have seen in the summer.

Now it is quite possible, and indeed quite likely, that both banks are trying to drum up business from their institutional clients with these comments, but if we look behind the sound bites we find reasons to believe they are not without merit.

For example, the chart below shows the percentage of stocks within the Nasdaq 100 index that are trading above their 5-day moving average.

To all intents and purposes this finished last week at zero but has already rallied by 13% points today.

If we look at the position at other key moving averages we find that they are also in oversold positions.

And what about the S&P 500 index and its constituent sectors? Well, they look just as beaten up and there is far too much red in this heat map for my liking.

In the S&P 500 itself, there are just 4.37% of stocks trading above their 50-day moving average which means, as we can see in this five-year chart of the indicator, that we are in an area from which it can rebound quite vigorously, and perhaps with it the index.

Here is a look at selected US sectors and indices ranked by their RSI 14 readings many of which are in or near to oversold territory. Which again could suggest that a bounce is on the cards at some point notwithstanding my comments about overextension earlier.

Of course, the one thing that’s missing from this picture is the catalyst, the piece of information that can change the narrative from negative to positive, and turn fear into greed among investors but as and when that materialises a decent bounce could be on the cards.

Tim also pointed out that the S&P 500 is (incredibly?) just 2% below the quarterly open price of 3781. A bit of window dressing to end the month?

Markets are breaking because the UK actually wants to make the economy better. HOW DARE THEY