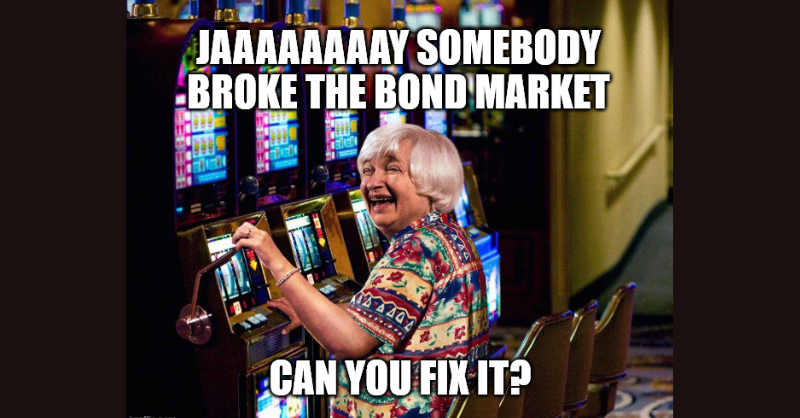 🔔 The Bond Market Is Broken. Let's Fix It

Ladies and gentlemen, allow me to introduce myself. I'm your self-appointed Twitter expert for the day.

I'm going to take you through some things I don't completely understand. I know just enough to be dangerous (because I've been paying attention to actual expert types and market practitioners and then filling in the blanks).

These are things that will be crucial for financial markets over the coming months/years...

Kinda obvious that Janet Yellen's a problem, so let's focus on the other part: the loss of liquidity in treasuries.

The world's most liquid market™ isn't so liquid right now, which means volatility is rising... 👇

Yet every single night, over $2 trillion is parked back at the Fed (via their overnight reverse repo), a facility designed to mop up excess liquidity.

Which means we've got a liquidity shortage causing wild swings in bond markets at the same time as there's $2 trillion in excess liquidity that can't find a home. How can both of these things be true?

"Generals are always prepared to fight the last war"

The last war being the GFC back in 2008. Banks were under-capitalised, so a new framework (Basel III) was subsequently agreed to ensure the same problem couldn't arise in the future.

We're not gonna go through the whole thing. Just the most important part 👇

The supplementary leverage ratio is the US implementation of the Basel III Tier 1 leverage ratio, with which banks calculate the amount of common equity capital they must hold relative to their total leverage exposure.

Large US banks must hold 3%. Top-tier bank holding companies must also hold an extra 2% buffer, for a total of 5%.

The SLR, which does not distinguish between assets based on risk, is conceived as a backstop to risk-weighted capital requirements.

In simple terms, the more assets a bank has on the balance sheet, the more capital the bank needs to set aside 'just in case'.

However, after the treasury market seized up during the Covid panic, the Fed announced a temporary exclusion of reserves and Treasuries from the SLR for the largest U.S. banks.

That exclusion expired a year later in March 2021 👇

And the reaction was inevitable... 👇

Two months later, banks were turning away deposits due to those increasing capital requirements...

Banks including JPMorgan Chase and Citigroup have held conversations with some large corporate clients about putting cash into money market funds rather than in deposits, according to people briefed on the talks.

An influx of deposits with relatively weak loan demand depresses bank profits. It also increases the size of their balance sheet, requiring more capital and reducing banks’ returns on equity.

Basically, excessive regs mean too much cash is bad for business, so it's better for the banks if big depositors stick the excess cash in money market funds instead and send it right back to the Fed 👇

“The continued upward trajectory of regulatory capital requirements on America’s already fortified largest banks, particularly when not reflective of actual risk, is itself becoming a significant economic risk,”

“This is bad for America, as it handicaps regulated banks at precisely the wrong time, causing them to be capital constrained and reduce growth in areas like lending, as the country enters difficult economic conditions.”

If you want to dig deeper, this is an excellent explainer. 👇

The crux of the matter? 👇

Since the onset of the pandemic, the U.S. government has increased the level of outstanding Treasury debt by roughly one-third, or $7 trillion.

This rapid and significant increase in the supply of Treasury debt demands a commensurately more robust and well-functioning secondary market for U.S. Treasury securities to ensure that the U.S. government can manage the increased cost of financing the pandemic response.

That secondary market hasn't developed due to over-regulation, (the re-imposition of the SLR on treasuries)...

Almost certainly. This recent speech from Governor Bowman ("Large Bank Supervision and Regulation") was the strongest hint yet 👇

There are obvious risks from under-regulation, and it is those risks that were addressed in the wake of the financial crisis 14 years ago.
But we sometimes overlook the significant costs to our economy, and risks to safety and soundness, from over-regulation, where rules are not designed and calibrated to address the actual risks.

In a time of rising interest rates that could constrain credit, it is especially important to ensure that regulation and supervision not add costs and burdens for banks with little or no benefits to safety and soundness.

Thinking about capital holistically also provides an opportunity to consider adjustments to the components of the capital requirements for the largest institutions, including the supplementary leverage ratio

It needs to happen soon.

Curvature's Scott Skyrm has been in the repo market for 30 years, and explained the upcoming/present problems perfectly. 👇

Beginning in September, the Fed is supposed to let $95 billion a month Runoff [QT]. At this point, there’s no official end to the Runoff, but I expect it will continue until something breaks.

Think about $95 billion of Balance Sheet Runoff each month. That’s a massive amount of Treasury and agency securities entering the market. Now, when you consider net new Treasury issuance, there’s even more Treasury supply on the way.

Though I’ve seen a range of estimates, let’s assume the government budget deficit is $1 trillion. That means there’s another $83 billion a month in new securities coming into the market. Combine Balance Sheet Runoff with net new Treasury issuance and we are looking at about $178 billion of securities coming into the market each month. Every month for the foreseeable future; no end in sight.

Think of it this way, there will be $1 trillion more government securities in the market by March 2023. Where’s the cash coming from to pay for these securities?

The obvious place is the overnight repo facility. To do this, SLR changes will likely be needed to facilitate a secondary market and the transformation of overnight money deposits from the RRP into bill and treasury buyers, as well as bringing banks (natural buyers of duration assets) back to the party.

Summing up, keep a close eye on the headlines for any comments on regulatory relief for the big banks, their capital requirements and the supplementary leverage ratio.

It sounds boring and dry (it is), but the announcement will likely bring a huge sigh of huge relief across markets.

Massive thanks to @siddiqui71 for checking this through and continually posting interesting stuff (along with @gamesblazer06) that sends me down financial rabbit holes!

Highly recommend following both of them.

The pain's only just beginning. Things will get worse before they get better. Are we having fun yet?

it's hard to see how Germany gets through this without some serious long-term scars. A short recession would be an amazing outcome that only the most optimistic could entertain.