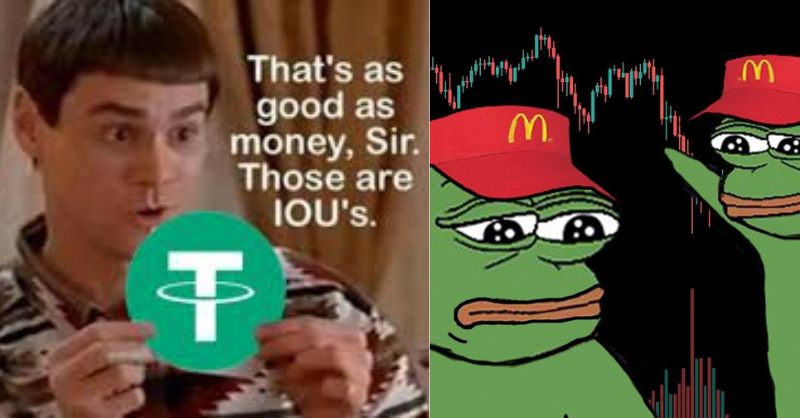 This post is about Tether. It's not about being a Tether truthooor, FUD or anything else. There's just a bunch of unanswered questions and I'm wondering how they could play out.

Some of this stuff is well-known, some of it is forgotten, some of it is new. In case anyone misses this point, I have no personal axe to grind here, I'd love to be proven wrong, but I just don't see a positive outcome for Tether.

Most analysis tends to focus on Tether's stablecoins not being fully backed. They're probably not. That might never matter.

Optimistically, as long as there's never a big bank run on Tether, they only need to be backed enough to process the withdrawals.

If the change in their reserve structure from highly illiquid commercial paper (short-term loans to companies) to highly liquid treasury bills is anything close to accurate, normal withdrawals shouldn't be an issue 👇

Yes, there are really good reasons to doubt the accuracy of those statements and not take them at face value, (like the whole STILL not being audited thing) but we'll ignore that for now.

Tether's business model. How does it work?

This is what we see 👇

This, in itself, isn't a profitable business model. It looks sort of like a bank, sort of like an MMF . It's just a simple asset swap. There must be a strong profit motive for the business to be credible.

In theory, the company earns fees from merchants, individuals and exchanges.

They can simply take those dollars and invest them in yield-paying assets (fortunately US bonds/bills are doing that now), and/or lend out a small proportion of the reserves and charge interest on those loans.

A lot like a bank, but without the transparency. However, there are some implicit assumptions that need to be accepted if you think this is all just fine.

Mainly, that the USDT issued is actually matched by USD coming in to Tether. Either from investors, or by people depositing fiat on exchanges and converting to USDT, rather than it simply being 'printed' out of thin air...

Our willingness to blindly accept these assumptions should be far lower in light of recent events... 👇

Go on then, how will Tether die?

I have a theory that Tether dies due to regulation, transparency/industry standards, or outright competition. Take your pick.

Some combination of these or just uncovering outright fraud.

Fraud aside (we'll get to it), this can go one of two ways.

Either Tether gets fully audited... or the reputational risk of being associated with them grows too large. An unaudited Tether isn't compatible with a clean crypto industry...

There's an auditing conundrum here too. What if Tether is backed enough to function in most market situations, but not backed enough to fend off someone with deep pockets who fancies themselves as a bit of a Soros?

Publishing audited accounts is like painting a target on your back if that's the case.

The Binance CEO is also promising to highlight 'issues' 👇

If you're looking for a cleaner industry, wouldn't you see Tether as an 'issue'.

What unique, non replicable purpose does Tether serve here? How many unique stablecoins does the industry really need?

Is there an opportunity for Binance and Coinbase to increase traded volumes and stablecoin market share here?

Maybe a slow attrition? In a properly regulated space, this kind of consolidation could be considered anti-competitive/monopolization. There's a window of opportunity to grab stablecoin market share, from each other, and from other competitors (like Tether?) before the regulators really clamp down...

The problem? Tether is currently the undisputed king of stablecoins by daily volumes. In the last 24h, USDT has done $53bn on Coinbase, while their (native) USDC hit a paltry $3.4bn, and BUSD (on Binance) churned $9.2bn.

Why would two of the biggest crypto exchanges, with their own native, regulated stablecoins available, choose to continue to use Tether, or continue to allow it to be the dominant stablecoin on their exchanges?

Especially if the spotlight ends up on Tether's voluminous relationship with Alameda (whether this was functional market making or fraudulent is unlikely to matter, the spotlight's surely coming soon).

It's time to just ask some questions maaaan...

The other big risk for Tether is the strangely high number of people within, and associated with the firm. There are lingering questions and links with... well, tax fraud...

Aside from the old whispers that "maybe there's a bunch of money-laundering out of China & Hong Kong", take a look at these characters in the story arc...

Turns out these two have worked together before... 👇

By the time online poker’s Black Friday arrived in 2011, Absolute Poker was being targeted by Norwegian tax officials for what was claimed to be the largest tax fraud in that country’s history.

It was all a shell game, however. Absolute Poker’s revenue streams, estimated over its years to total hundreds of millions of dollars, had been diverted into unreachable investments scattered around the globe

OK. Let's naively give them the benefit of the doubt. Everyone can make mistakes. Maybe it's all just a big coincidence? Accidental tax frauds happen all the time, right?

Here are some of the other characters involved at Tether...

Giancarlo Devasini, financial director of Bitfinex and Tether, and the Dutchman Ludovicus Jan van der Velde, CEO of both companies

Turns out they've got a friend who apparently specialised in VAT scams, to the tune of hundreds of millions of euros 👇

A secret that binds the Italian cryptocurrency guru, Giancarlo Devasini, financial director of Bitfinex and Tether, and the Dutchman Ludovicus Jan van der Velde, CEO in both the companies. They both have been doing business for years with Dutchman Gennaro “Rino” Platone.

Platone’s name says nothing to ordinary people, but is a well known to the police and tax authorities across Europe. For years Platone was the undisputed king of some of the major VAT scams in the Old Continent, capable of achieving a turnover of half a billion euros a year.

What are the odds that people associated with two large tax frauds could find their way to a non-transparent shadow bank (and the defunct market maker associated with a now bankrupt crypto exchange)?

The whole piece is worth a read 👇

As is the profile of Devasini 👇

The TLDR of the VAT scam: Platone was accused of being at the centre of a huge carousel fraud. These are the basic mechanics 👇

The reality can be far more complex... 👇

The idea is to generate lots of cross-border transactions, weave a complex web, skim the VAT off the top and disappear before the authorities catch up with you.

Hypothetically, if someone wanted to recreate a scheme like this, where you move vast sums of money and continually skim 10% off the top... wouldn't Tether/crypto be the perfect vehicle?

Tether's been around for so long, there's an assumption that surely it's fine. We'd know by now if it wasn't...

Tether's numbers have been audited by an accounting firm with only three employees. Several whistle-blowers point out that the numbers are too good to be true, and assume that Tether engages in insider trading, front running or money laundering, rather than making up numbers out of thin air.

Gossip that they're up to something is widespread on Wall Street. Banks won’t touch them. Journalists are sniffing around and Bloomberg, one of the most influential voices on Wall Street, ran a piece questioning the numbers as early as October 2021. But the scheme is so well conceived and organized that Tether carried on as ever.

The source? My imagination. Well, actually a John Authers article about Bernie Madoff.

I mischievously switched the names and dates to make the point. See, you can't trust anyone. Tricksters everywhere.

This sort of stuff can go on for longer than would seem plausible. Longevity is no proof of anything. People all chose to believe in Madoff for a LONG time, despite the obvious red flags. Familiarity breeds fondness.

All of which is to say, there are serious risks associated with Tether, and limited reward for bearing those risks when other stables exist.

If I was still engaged in trades that involved USDT, I'd probably look for alternative stablecoins or trade structures and I definitely wouldn't hold USDT anywhere, especially when there are other options that have FDIC insurance.

It's a pointless risk to take, at least until they're audited like a proper money-market fund.

For all sorts of reasons, I don't think this happens. In my view, Tether's NGMI.
I'd be delighted to be proven wrong.

Let's end with a quote from this absolute legend 👇

“Good times teach only bad lessons: that investing is easy, that you know its secrets, and that you needn’t worry about risk.
The most valuable lessons are learned in tough times.”
— Howard Marks

Crypto is going through tough times. The only question is if those lessons have been learnt. I honestly don't think they have yet...

We look at whether there is WORSE news, data and sentiment coming out to determine whether we remain or push above the 200DMA.

On conspiracies. And making sense of this complex web of stories that we call financial markets...