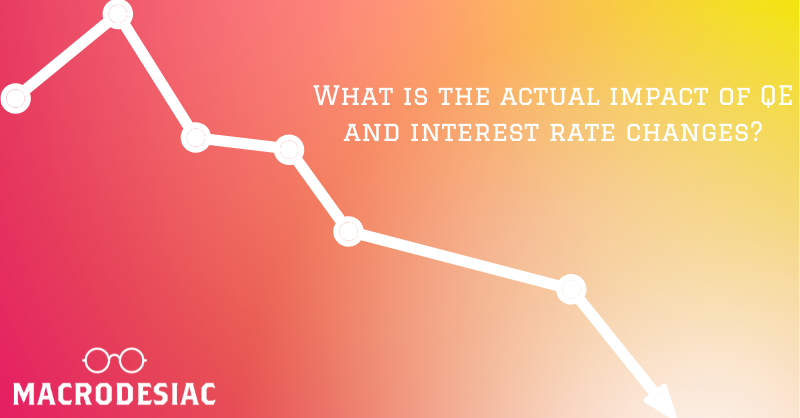 🔔 What is the actual impact of QE & interest rate changes? Pt 2

Yesterday we covered the impact of QE & low interest rates on asset prices, bundling that under the financial economy 👇

Today we're onto the impacts on bank lending and the real economy, and how this feeds back into the whole system.

Why separate the two? Because...

"The stock market is NOT the economy"

I like to think of the financial and real economies as two co-dependent systems that operate independently of each other a lot of the time.

But when it comes to interest rate changes, they become very linked.

The Bank of England explained how the interest rate mechanism feeds through to the wider economy...

We buy government bonds or corporate bonds from other financial companies and pension funds.

When we do this, the price of these bonds tend to increase which means that the bond yield, or ‘interest rate’ that holders of these bonds get, goes down.

From the outside looking in, the process looks like this 👇

It seems so simple, so logical. That alone should arouse suspicions...

This is a far more realistic perspective 👇

Funds are loaned out or excess reserves pile up...

And there are plenty of excess reserves around... 👇

Bound to be some excess when you "flood the system"... 👇

Fair to say you simply flooded the system with money?

POWELL: Yes. We did. That's another way to think about it. We did.

There's a big problem with that imagery. A genuine flood gets into every nook and cranny of the system. That's not how this works.

It's more like a system of river locks. The 'flood' is guided and compartmentalised, and often stays in one place for a long time.

This monetary 'flood' reaching the real economy depends on a sequence of unlocks...

Some QE transmission worked in a slightly unique way during the pandemic.

Extraordinary times & extraordinary measures, but that's over now. So we're back to the BOE's explainer:

What if they don't want to?

You can't force people to borrow. If people/businesses have taken on a load of debt already, they might not want to load up even more, especially if they feel that the economic outlook is uncertain.

Going back to the pandemic, the Fed launched the Main Street loan program "to support small and medium-sized businesses".

The program made available $600 billion in loan facilities to employers, who must have been in good financial standing prior to the onset of the COVID-19 crisis.

To encourage banks to lend, the Fed bought 95% of new or existing loans to qualified employers, while the issuing bank kept 5% to discourage irresponsible lending.

The Fed asked the same question... 👇

Even with the Fed essentially insuring 95% of the loans, banks still weren't keen to lend. And the biggest reason why 👇

“The level of bank reserves hardly figures in banks lending decisions;
the supply of credit outstanding is determined by banks’ perceptions of risk/reward trade-offs and demand for credit”.

So, QE doesn't actually impact the rate of lending, and the whole 'money multiplier' idea is a myth... 👇

Does the shape of the yield curve affect lending?

Today and forever more (regardless of the shape of the yield curve) banks can exploit the spread between lending and deposits that isn't curve riding.

Today's banks are sophisticated risk managers and understand that funding 10 year assets with overnight money is just begging for an extinction level event.

Instead, banks use interest rate swaps to manage that risk.

A flat yield curve may be a sign of economic headwinds/recession ahead (which can negatively impact lending decisions), but the difference between interest rates at different time horizons isn't a decisive factor for banks to lend.

The higher interest rates that we're seeing should actually be a good thing for US banks. 👇

Bank of America says that a 100 basis point parallel increase in interest rates would boost net interest income by $6.5 billion over the next 12 months; that’s a 15% jump on the 2021 level.

Summing up, almost everything you've been told about QE and low interest rates is wrong. It matters, but it's not as dominant as we're often led to believe.

Lending is a function of credit risk. If banks think you can make money and pay them back, they'll lend.

Linking it all back together, things happening in the real economy feed back into the financial economy.

The value of assets is determined by the appetite for savings in an economy. Too much saving and not enough consumption creates an asset shortage 👇

In simple terms, an economy that is more 'equal' has a better balance between saving and consumption. Instead of that, we have this 👇

If unevenly distributed, wealthier people will consume less of their income and save more. Lower MPC and higher MPS translate into higher demand for financial assets for a given level of aggregate income.

Beyond a certain level of wealth, there's only so much you can buy. Which creates an excess of savings looking for a home.

Excess demand for savings pushes up asset prices excessively because there simply aren't enough assets to accommodate the level of savings.

And if this is you after reading this, I've done something right. 👇

🔔What is the actual impact of QE & interest rate changes?