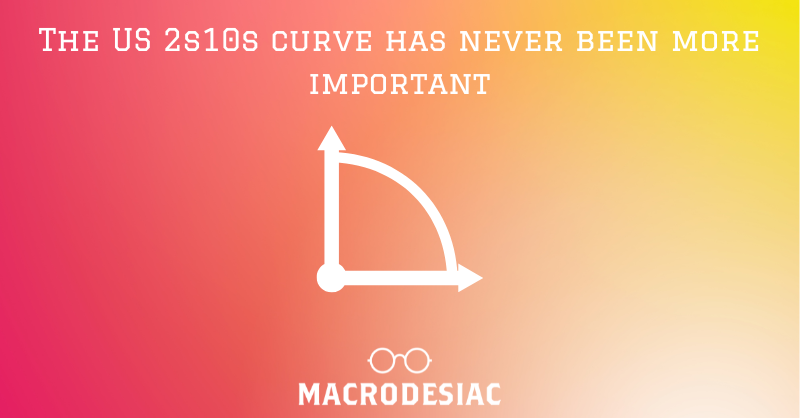 And right now, there are concerning signs.

The 2s10s chart below should provide some insight into why I am saying the curve has never been more important...

But why does the 2s10s curve matter?

In the curren context, it's at record lows!

But more specifically, it all comes down to the market's expectation of interest rate pricing.

The yield curve shows us the expected return for holding bonds of different maturities.

If you isolate - in our example - the 2s10s curve, we are looking at the yield difference on holding US government debt of a 2 year duration vs a 10 year duration.

If the yield on holding debt of 2 years is higher than the yield on 10 year debt, this is known as curve inversion, as in the chart above where the difference is below 0%.

Interest rates tend to be able to increase in a good or rebounding growth environment, so if the bond market believes interest rates to be lower in 10 years versus in 2 years, it is essentially saying growth will be weaker, or at least not sustainable at current levels.

What you might notice as well is the curve is the most inverted it ever has been.

This is concerning, especially when considering the speed is has inverted at because of the Fed's fastest rate hike cycle pretty much... ever.

If we look back through history, generally when the spread starts to revert, we enter recession.

Now what could start a steepening (increase of curve)?

If the Fed starts being a bit softer on interest rates or we approach the terminal rate!

This is why currently, there is so much chatter over inflation, whether it is peaking and where it could end up, since interest rates change to try to affect inflation.

There is another yield spread that doesn't really inspire confidence, and is related to the deflationary bust scenario.

In even shorter words, as long as the 3m10y is flat or inverted, it'll be tricky to expect an extended rally in risk assets - which begs the question, when will the Fed pivot to begin a new bull market?

Our guess is they are likely going to push for rates to get as close as possible to the current expected terminal rate, and it's almost expected that roughly 5% will be reached, with smaller hikes rather than the jumbo hikes we've seen so far.

“If people come away thinking that the Fed is gonna raise rates to 5% or thereabouts, which I think is what he was kind of trying to hint at in November, then I feel like that he will have more or less done the job in terms of signaling,” said Stephen Stanley from Amherst Pierpoint.

Time will tell, but for now we're still in a very tough market with yield curve inversion being the most important aspect over the medium term.

Why are FX reserves important?

FX reserves aren't the most fun part of the market, but it is important to understand how they work and the different dynamics at play with different central bank contexts.

Workers want pay rises just as companies face up to shrinking profits. Productivity is too low. Something will have to give...