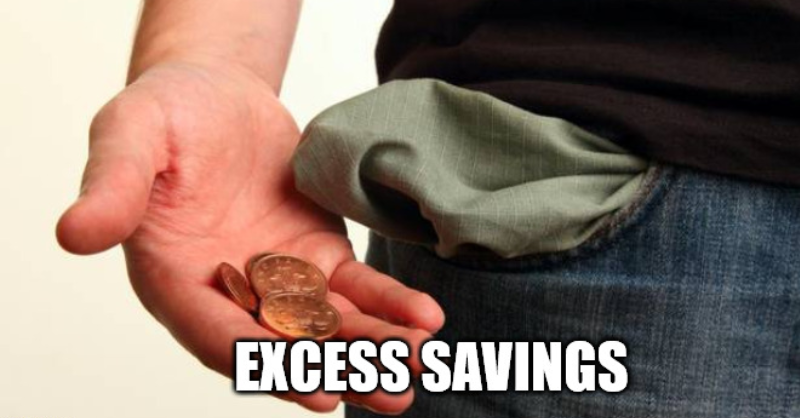 Don't worry. Nobody's asking you for cash. Goldman Sachs says the US is still sitting on $2.2 trillion of excess savings so there's LOADS to go around anyway.

As long as you're one of the lucky ones sitting on a big stack, and not Larry Little Stacks... 👇

The relatively small share of excess savings held by lower-income households suggests that most of the growth impulse from excess savings is probably behind us, and we expect that the saving rate will fall only a bit further to 4½-5% in 2022H2 before normalizing back towards 7% in 2023 and 2024.

However, we expect that strong household balance sheets will continue to provide a backstop for spending levels, since the combination of excess savings and rapid asset price appreciation during the pandemic effectively increased the share of households who are able to smooth consumption if hit with a negative economic shock.

For context, a negative economic shock = unemployment and/or recession (which GS expects will be mild if it happens).

Lower income households have a higher MPC (Marginal Propensity To Consume), which is economist speak for "spend more of what they earn", and it's the middle income earnerss that really drive overall consumption trends.

Oh, and a return to a 7% savings rate would be extremely normal... 👇

Moreover, for much of the past decade, most new mortgage debt had been added by borrowers with prime credit scores.

In addition, the staff assessed that business leverage was high, but businesses maintained ample cash on hand and their credit quality remained strong. Further, the ability of most firms to service their debt was at a historically high level, as measured by the interest coverage ratio.

Basically, property values have risen by a lot more than mortgage debt 👇

And the majority of mortgages were given to those with good credit. Which is all well and good if you own a home with a decent amount of equity in it of course.

And that's probably down to their savings buffers being eroded...

None of this needs to be apocalyptic or lead to the big crash that every man and his dog is talking about. But it does point to less room for error in any assumptions about the trajectory for the economy and spending.

That doesn't mean everything comes to a complete halt. It's normal for those at the lower end to feel the pinch first. That's the problem with being on a lower income.

Take the 0% monthly growth in US retail sales as an example. Was it that bad?

Retail sales were flat in July, but after adjusting for sharply lower prices of some goods, particularly gasoline, real retail sales actually rose 0.6%, the first volume gain in three months.

E-commerce notched a solid gain, perhaps lifted by Prime Day. We expect the staying power of the consumer to last into August before a sharp spending retrenchment takes hold this autumn.

Here's a chart to confuse you some more 👇

Proceed with caution when trying to make broad statements about prices in the current environment as various categories are experiencing directionally different moves in prices. Try telling someone in the checkout line at the grocery store that goods prices are lower.

The nominal gain of 0.2% at grocery stores translates to a real decline of 1.1% after adjusting for soaring grocery prices, the second largest real decline of any store type in July.

Summing, up, it's all really confusing, but the direction is nailed on.

Our base-line expectation is for consumers' staying power to last into Labor Day, and once the kids return to school and the bills come due, households will begin to tighten their belts. Even as inflation is showing signs of moderating, it will do so only slowly.

There's little doubt that consumption is starting to slow. Walmart CFO Rainey noted that their customers were starting to adjust their spending choices.

"We expect inflation to continue to influence the choices that families make, and we're adjusting to that reality"

There's still plenty of reality adjusting to be done.

"For industries typically geared toward office work, the share of hours worked remotely was above 50 percent on average."