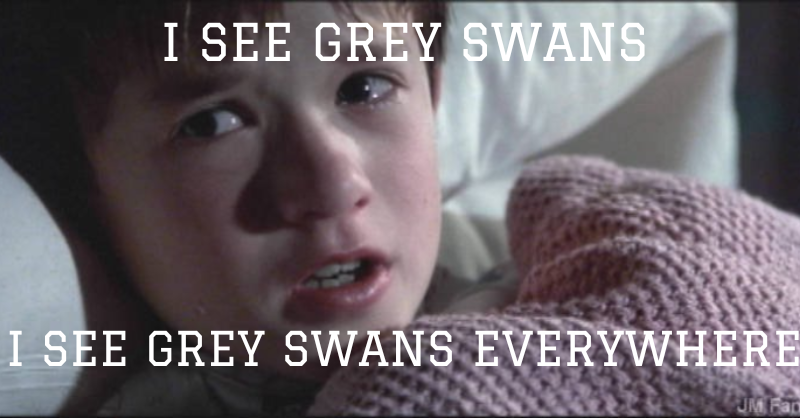 Things are moving fast. Everything's happening all at once. Pundits tell us that we're inevitably heading towards economic collapse. Fear sells.

Others will talk about the black swan event. The thing that nobody saw coming...

But we don't need a black swan. There's a veritable smorgasbord of risks hiding in plain sight.

Before we indulge in some FUD, the disclaimer.

This isn't a note about about full economic collapse or whatever 'reset' the doom-mongers are selling this week. The system deals with risks all day, every day.

Sometimes it's just one big risk. Other times, like now, there's an entire buffet to choose from. So, these are some of the risks to monitor over the coming months 👇

The current/coming pace of rate hikes is unprecedented in the modern era.
You know it's bad when there's talk that even the Swiss National Bank, with their deeply negative interest rate, are likely to hike next week.

After today's US CPI data came in hot again, the market sees the Fed funds rate at ~3% by the end of the year. Can't entirely rule out a 75bps hike next week either.

The Federal Reserve is the most important. We've touched on the dollar's key role in the global financial system plenty of times before.

The short version? There's an entire global system of dollar borrowing benchmarked to US interest rates 👇

As those interest rates rise, the cost of servicing and refinancing debt increases. For some, rolling those debts over will be impossible as lenders demand more premium (interest) from borrowers than those borrowers can afford.

Especially for companies that don't turn a profit. 👇

You get the idea.

But so what if some of these funds go to the wall, valuations were ridiculous anyway. It's a welcome return to reality. While we're at it, let's take down the zombies too.

One fifth of the Russell 3000 isn't earning enough to cover interest rate expenses... Rename it the Russell 2400. Problem solved (except for the added unemployment and all of the secondary effects, gah!)

Summing up, the longer inflation persists at high levels, the more interest rates will have to increase. Which means more highly-indebted companies unable to survive without making some serious cuts...

It's already started, especially among the tech firms. This is in the past week 👇

This might not seem like a risk, but if we stick with the US & the Fed, the idea of hiking rates is to slow the demand (consumption) side of the economy.

If they can make people feel a bit poorer (or more cautious about spending) using the blunt instrument of higher interest rates, then consumption should slow.

What if wages increase to (+/-) keep pace with inflation?

For the Fed to slow down, they'll want to see wage growth slow...

How long will it take for spending to slow 'enough'?

This is the million dollar question. Even though people are loading up on credit cards, the debt to income ratio is still below pre-pandemic levels.

No problems servicing that debt either...

So maybe they just keep on spending and the Fed keeps hiking to break the back of inflation. That likely means a stronger US dollar, potentially leading to...

The headline says it all. As much as Japan pushes back against yen weakness, it's the speed of the moves in the currency that they're most against, rather than the level.

So, USDJPY at 140 or 150 isn't so far 'out there' unless they actually DO something about it by raising interest rates in Japan or shifting the yield curve control band higher.

Which could open up a massive can of worms given Japan's massive debt load and position as the world's largest creditor...

New China: Like The Old China, But Without The Growth

From a shorter term perspective, the Zero-Covid strategy has been catastrophic, and as the economy stop-starts and sputters towards reopening, many exporters will find it's a terrible time to boost business

From a longer-term perspective, loads of structural issues are coming to a head, unemployment is increasing, incomes aren't (which means less domestic spending) 👇

The crackdowns on housing and tech look to have done irreparable damage to confidence, and it's hard to spin the creation of a 'bad bank' as positive 👇

An energy shortage, or an energy infrastructure shortage?

Maybe a bit of both. Either way, there's no quick fix. It takes time and investment to build oil refineries and liquefaction/re-gasification plants.

Even then, is there 'enough' to go around? For all the talk about OPEC+ ramping up their production... 👇

...they're still massively under-producing vs the quotas.

A cold winter and/or some unrest in production countries (high food prices? political regime change?) could easily lead to energy shortages as storage levels are depleted and production decreases.

It doesn't have to be Turkey (sorry, Turkiye), but Turkish inflation is running at 73% and the lira's weakening bigly so Erdogan's realm seem the logical candidate...

As reported by Reuters, the administration is taking steps to shore up the economy and the lira weakness... 👇

The Treasury said it would issue domestic bonds indexed to the revenues of state enterprises to encourage lira asset savings, the central bank raised the required reserves ratio for lira commercial cash loans to 20% from 10%, and the banking watchdog tweaked a maturity limit for consumer loans.

But no rate hikes in the pipeline. The unconventional monetary policy continues.
It could be any emerging economy that struggles, but Turkey looks like the biggest risk, especially with elections in a years time.

Talked about this earlier in the week. The ECB failed their test miserably on Thursday. Confirmed a 25bps hike in July, 25 or 50 (or maybe something in between) in September. That was it. No ideas about fragmentation or policy beyond September, except 'sustained' rate hikes.

Italian bond yields and the BTP-Bund spread are up massively since (Italian bonds selling off), the euro's down and Italy's stock index is on track for a 5% loss today.

Sticking this one at the end as it's not so much a 'today' problem, more a problem for later when people want to move and renegotiate mortgages.
The Bank of Canada are worrying though...

The Bank is paying particular attention to the fact that a greater number of Canadian households are carrying high levels of mortgage debt.
These households are more vulnerable to declines in income and rising interest rates. While the sharp increase in house prices over the past year has resulted in significant equity gains for many households, those who entered the housing market in the last year or so would be more exposed in the event of a significant price correction.

The vulnerabilities highlighted in this report suggest the effects for the real economy could be significant if a trigger event occurs, even as systemically important financial institutions remain resilient.

And that's as much as I can sum up without this getting too long. There's no doubt we're living through a historic period right now.

I think the drama's only just getting started, but that doesn't mean ThIs iS tHe EnD.

It just means change. Some things will never be the same again. Others will barely change at all.

We adapt, we evolve, and we keep on rolling forward.

🔔 The Many Layers Of Supply & Demand

The Veteran's in command today with his thoughts on the intricate craft of trading and lessons from the battlefield...