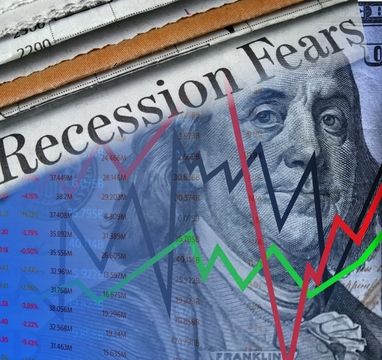 "Recessions Don't Happen When Everyone Is Expecting Them"

Even Business Insider are in on the act 👇

Most people would know that things go up and down, even Joe Public, right?

If they didn't, we'd just have an infinite up only business cycle and everyone would be exorbitantly wealthy - absolutely no relativity theory of give and take at all.

I completely disagree with this notion that recessions don't happen if people are expecting them.

For one, if people are expecting it to happen, people turn defensive.

Secondly, Trichet (the ECB's President in 2009), when referring to the underpricing of risk said, 'Warnings by the authorities about the possibility of an abrupt correction in financial markets date back to 2006.'

So clearly there were people expecting a downturn before the Great Financial Crisis happened. Duh.

In Q1 2021, retail piled more into stocks than the previous TWELVE YEARS COMBINED, with margin debt hitting records through 2020 and 2021...

When people in the financial sphere make these bold claims of 'priced in', especially when referring to recessions, we must remember that recessions are painful to the REAL ECONOMY, not just asset prices that we gamble in day in & day out.

They hurt, and we are a very small sample size who are hyper focused on markets and economic data - we are not representative of the real economy, so what might seem priced in for us isn't necessarily by the 95% who experience recessions by living through them and forecasting (or not) them.

There's never a shortage of innovation in the chip industry. Moore's Law keeps on delivering even though the absolute wizards behind this microtechnology have to dig deeper into their creative reserves to deliver progress.

Now we're onto the NEXT BIG THING™

Yeah it sounds really geeky and boring, but it's pretty much fiberoptic technology in a chip, which sounds way better. 👇

Light has been used to transmit data through fiber-optic cables, including undersea cables, for decades, but bringing it to the chip level was hard as devices used for creating light or controlling it have not been as easy to shrink as transistors.

PitchBook’s senior emerging technology analyst Brendan Burke expects silicon photonics to become common hardware in data centers by 2025 and estimates the market will reach $3 billion by then, similar to the market size of the A.I. graphic chips market in 2020.

It's a fast-developing sector, and investment's flowing in at a faster rate now too...

According to data firm PitchBook, last year silicon photonics startups raised over $750 million, doubling from 2020.
In 2016 that was about $18 million.

Who's investing? Just a couple of minor multinationals... 👇

On the AI front 👇

PsiQuantum raised about $665 million so far, although the promise of quantum computers changing the world is still years out.

Lightmatter, which builds processors using light to speed up AI workloads in the datacenter, raised a total of $113 million and will release its chips later this year and test with customers soon after.

Definitely something to keep an eye on as chips and data continue their exponential rise.

Here's a 2 minute explainer video of how it works 👇

Dollar dominates, but for how long?

The dollar's on a rampage and hurting plenty who've tried to fade the trend.
It's very obviously 'overbought', and there are plenty of these types of charts doing the rounds 👇

Sentiment is very much one way (wth good reason). Now though, dollar bulls are taking victory laps & euro bears are all "death to the euro".

Some people are taking it even further...

But the trend is your friend until it ENDS

Nothing about that looks bullish. The trend hasn't ended. But there could be some catalysts for relief from tomorrow ahead of the FOMC next week 👇

We'll be running through them with Macrodesiac Premium members as the data drops.

Is it a bird? Is it a plane? No, it's a giant ponzi, all our hopes and dreams of innovation and progress, and the future of money and energy and....

🔔 None Of This Makes Sense