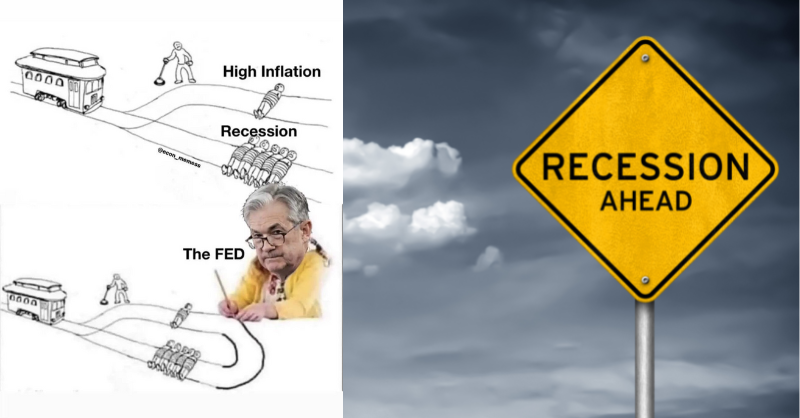 And some things... just don't change at all 👇

"Time to hike yet? Nope! Not even widening the YCC bands mate"

Let's head back to Wednesday's Fed presser and Powell's comment:

“We’re not trying to induce a recession now, let’s be clear about that,”

If not now, when?

Since the meeting, Fed fund futures have dialled back their expectations for the terminal/peak Fed rate this cycle. Pre-meeting it was at 4% by March 2023.

Now that's fallen back to just over 3.75%, essentially 1 hike less than the pre-meeting pricing. Perhaps more of a reaction to the Fed's dot plot than anything else... The median dot (green line) peaks at 3.75% in their projections
👇

Maybe a rate cut later in 2023 to bring the Fed funds back to the December 2022 pricing? Beyond that, it's really anyone's guess. September 2024 is priced at the same level...

There's certainly no rush to price in an aggressive cycle of rate cuts, even though 60% of CEO's see a US recession within 12-18 months, and 15% say we're already in one!

That's according to the latest conference board survey, released earlier today.

CFO's are less convinced than CEO's, but 75% of CEO's thinking we're already in recession, or will be by the end of the year is definitely critical mass levels.

And when people believe there's going to be a recession, that belief can become self-fulfilling.

a “good chance” of a US recession that’s at least in part the result of a “self-fulfilling prophecy” as investors, companies and consumers grow increasingly worried about a downturn.

And the tight jobs market doesn't necessarily matter. People aren't rational, and if all they see are higher prices, that's what they'll focus on...

“Every time they go to the store they see inflation and it makes them angry.”

More puzzling were his comments about the housing market...

"The idea that we're in a housing bubble is not so much talked about yet, but it's starting to come back,"

Well Bobby... Bob? Can I call you Bob? If only you'd been reading Macrodesiac...

We even used your housing index to highlight it mate! Anyway, it's too late to talk about being IN a housing bubble. Past tense works better. We're on the way out of it...

XHB, the home-builders ETF is already down 40% from the highs and closing in on the pre-covid peak...

And according to Redfin, homebuyer demand is plummeting...

How long until the "we're just normal people, we thought this would go on forever, and now we're in negative equity" case-study journalism pieces start dropping in the mainstream media?

Don't get me wrong. Being trapped in negative equity is one of the worst positions to be in. Happened to me in '09 so I totally empathise. I just have a general disdain for how the media plaster peoples' misery over the web and try to turn their stories into a heart-wrenching Hollywood blockbuster.

Anyway, once those stories drop, it reinforces the negative feedback loop. Who wants to be like Poor Dan & Sue, trapped in negative equity? They're everyday people, just like us... It could happen to anyone.

Even if you're one of the lucky ones in positive equity, if you want to refinance and bolster the cash pile, the huge jump in mortgage rates means the Home ATM is out of order for most...

Remember, the housing market IS the economy and it's also the key to slowing inflation...

Housing starts and building permits both missed significantly on Thursday 👇

Recession potential is definitely growing, and it would be no surprise to see the market zeitgeist shift to WHEN the recession will hit rather than IF pretty soon.

Indeed, you could take a look at TLT, the ishares 20+ year bond ETF and see yesterday's bullish engulfing as a tentative sign that investors may (finally) be seeing value in longer-term bonds as somewhere to park capital during a downturn.

TLT is available to trade with Macrodesiac Partner capital.com, and fully integrated with the world’s favorite platform, TradingView. (UK only)

Recession watch is well underway, but it'll be months until central banks can declare victory on inflation. This has been a cycle like no other. Now we get to see how it ends...

📔 The ULTIMATE guide to bond trading

The ULTIMATE guide to bond trading

Just as the housing market slows, and interest rates rise. Top timing as always. And Cathie Wood's price targets are outrageous for a reason.