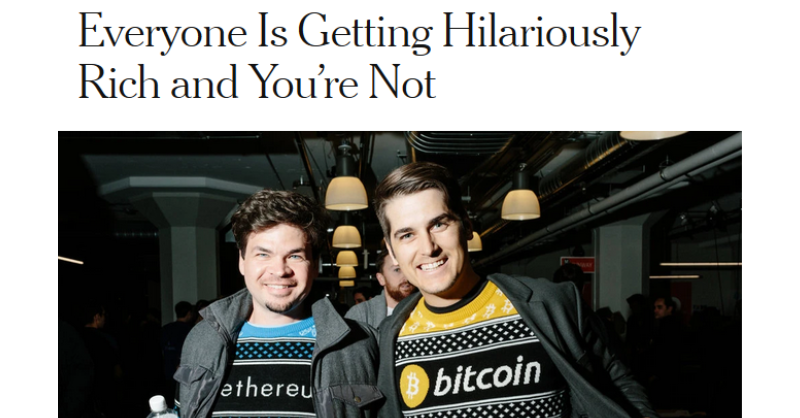 I've taken a rationally optimistic view to crypto over the years.

I love the innovation, the ideal of freedom & the removal of gatekeepers/rent-seekers. It's also clear that the current financial & political system is, at best, sub-optimal. And that's being generous.

But that doesn't mean that the old system needs to be completely replaced, nor that it will be.

However, we are now entering a phase where crypto needs to become more than potential.

Crypto needs to be (re)defined

People will rightly question that statement. They'll say it's already defined. And yes, crypto is defined for them, but it's too diluted in the mainstream.

For anything to become accepted, there needs to be a story behind it. Arthur Hayes is one of the best crypto evangelists and a great storyteller. Even if you frequently disagree with some of his conclusions, there's value in his process of thinking out loud.

His latest piece "The Doom Loop" binds together some of the monumental challenges facing governments around the world.

He also goes through the obvious logistical problems of trying to use gold for payments and/or storing commodities as "savings".
We covered some of these same arguments here 👇

Inevitably, (he's an evangelist after all) he concludes that the doom loop is good for Bitcoin & Gold.

The premise is that countries will engage in (even more) money-printing to deal with the latest crisis: The Fed will have to do Yield Curve Control (YCC), the EU will collapse, and trust in the old system will degenerate further.

The shock of cancelling the world’s largest energy producer from the dominant Western financial system cannot be undone.

No policy maker globally can ignore the precarious nature of any funds held in Western fiat currencies and their respective assets.

Therefore, the Doom Loop’s occurrence is assured.
Even if the sanctions were removed today and Russia had free use of its funds once more, the mere fact that such sanctions could (and did) happen serves as a warning to never allow oneself to be put in such a situation again.

All of those arguments are worth considering (though nothing is ever assured).

Taking the other side though, even if some non-Western countries have the raw materials and energy, the value of those materials is determined by what can be done with them...

Broadly speaking, 'Western' countries have the best assets to create the most value from those materials. Especially if you include Asian countries that are 'Westernised' (Japan, South Korea etc).

They also comprise the biggest markets to trade with and develop leading technologies which they export to other nations. Including Russia 👇

This is the thing with global trade. It creates co-dependencies. It's not a war to be won. It's a game where over the long-run, everyone 'wins' (to some degree) as the world progresses unsteadily and unequally forwards.

As long as you don't invade your neighbours, take their territory by force, and generally abide by the rules of global trade (which are seriously flexible if you have things the world needs) then you shouldn't have too much of a problem parking your savings within the current financial system.

Inflation is the elephant in the room right now. Those deeply negative real (inflation-adjusted) interest rates are a concern. If the US chooses the post WW2 playbook (low rates even with high inflation) as the way forward then there'll be a lot of unhappy foreign savers... 👇

China would be chief among them. China's huge trade surplus is a big problem, and it seems to be one that they can't fix. Even now, they're returning to the old model of increasing infrastructure spending to achieve GDP growth targets instead of modernising the economy to boost domestic consumption 👇

Which essentially means even more debt for investments that are unlikely to offer a productive return. 👇

Back to Arthur's ideas. He suggests that China should revisit crypto mining.

In this way, China sells USD and EUR for hydrocarbons, burns hydrocarbons to generate electricity, and then stores the excess electricity in the form of Bitcoin earned from mining.

Here's the problem. Why would policymakers anywhere want to relinquish the control (and power) that fiat currencies provide? Especially in China...

Even if we assume that Bitcoin's value is as a store of energy, (and also assume everyone agrees on this), why wouldn't countries game this new system?

Produce as much energy as possible, 'save' it in Bitcoin and then sell out once energy becomes abundant due to the massive increase in energy production incentivised by a savings asset that's rapidly increasing in value?

To me, the idea of any major economy (sadly, El Salvador misses the cut here) deciding that Bitcoin is a reserve asset is unlikely any time soon. Maybe we can have this conversation again by the time the next 'AOC' is running for President...

The same Fabio Panetta who, back in 2020, proposed this 👇

Holdings of more than 3,000 e-euros would carry an interest rate that’s less attractive than that of the commercial banks.

He's far from alone. Most of the policymakers who say they favour crypto are talking the talk rather than walking the walk.

And policymakers aren't the only ones feeling threatened...

If FTX’s bid is approved by regulators, many in traditional finance fear the model could be applied to other assets, threatening Wall Street’s stranglehold over lucrative aspects of market plumbing.
The centerpiece of FTX’s plan is using algorithms rather than brokers to help clear trades, a crucial process for settling transactions that ensures sellers get their funds and buyers get the assets they’ve purchased.

Even as the CFTC deliberates, the industry is taking the fight to Capitol Hill. When the agency’s chairman, Rostin Behnam, testified March 31 before the House Agriculture Committee, he was grilled over FTX’s plan.

ICE and CME have long been major contributors to lawmakers from both parties on the panel, which oversees the CFTC. David Scott, a Georgia Democrat who chairs the committee, warned the proposal “could very well make our derivatives regulatory system riskier and our customer protections weaker.”

The FTX CEO lays out the idea here 👇

However, this comment that there are plenty of non-innovative and/or zombie companies is noteworthy. 👇

It's not like the traditional economy is at peak productivity...

See, I've long believed that the end game for crypto is a redesign, improvement, and repackage of what already exists.

After all, that's essentially what innovation is.

Twenty years ago, I'd buy CD's to listen to music. If I didn't have the CD, I couldn't listen to those songs.

Then came mp3's, music was suddenly abundant and the problem of piracy was born.

Then Spotify came along. Now everyone with the internet can listen to (almost) all of the 'CD's' anywhere in the world and artists still get paid.

Our market sometimes loses sight of what's in short supply. Capital as a general matter is plentiful, and it is assets that offer appropriate risk rewards that are in short supply.

Therefore, we are incredibly focused on growing our capacity to originate assets that offer attractive risk rewards.

They are, in fact, the limiter on our growth rather than the capacity to raise money.

I don't know how crypto solves The Asset Shortage but I'm pretty sure that's the next phase.

The human desire for progress breeds innovation and the sunk costs in crypto are too deep to simply walk away from. Slow down though 👇

Schumpeter's got some creative destruction lined up. Everyone knows how those most magic of crypto boxes work. There's some truth to this 👇

Although everything innovative has ponzi-like qualities at the start.

This headline speaks volumes about where we are in the cycle...

Regulators are tightening the noose, just as interest rates are going up and central banks are about to unleash Quantitative Tightening. The withdrawal of liquidity from the system phase.

Presuming this plays out, liquidity withdrawal will likely see the worst projects disintegrate, the least stable of stablecoins will fail, creative destruction burns off the deadwood and then we can move on to the new narrative.

It better not be this 👇

"Fix the money, Fix the world"

That won't fly with the general public. Normies don't generally understand 'money', nor do they see it as something that needs to be fixed. Maybe that will change one day, but I wouldn't bet on it.

Gold bugs have been screaming into that particular void for fifty years.

Building around trust and the disruption of existing industries and gatekeepers looks more likely to me than an entirely new system.

Either way, crypto will be redefined in the next couple of years.

The question now is who gets to redefine it.

The regulators? Or the industry?

🔔 We Don't Talk About Elon

A man bought a thing. He's now our saviour or wants to watch the world burn apparently Private > Public EURUSD: History doesn't repeat, but it rhymes

"If everyone's expecting it, it won't happen" | The Next Big Thing in chip technology | Dollar dominates, but for how much longer?