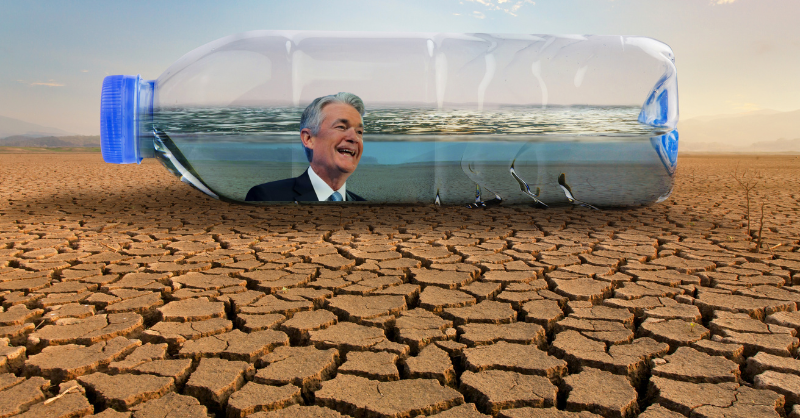 The title gives the game away, but this is how they describe the theme for the event... 👇

Government debt has exploded as fiscal authorities propped up pandemic-afflicted economies, and the interplay of monetary policy and fiscal policy has gained prominence.

The pandemic shock, with its disparate impact, comes in the context of an economy that was already experiencing growing wealth inequality and market concentration, a type of structural unevenness.

How has this structural unevenness complicated the conduct of monetary policy?

Lots of focus on inequality, unevenness, and how government spending/fiscal policy and monetary policy can work together are on the agenda.

There's no getting away from the fact that the whole event could be a dud for markets. Long intellectual introspection, short actionable insight.

However, it could also be an opportunity to talk markets through their plans for implementing faster Quantitative Tightening (QT) from September. 👇

$95 billion ($60 billion in treasuries and $35 billion in mortgage-backed securities (MBS)) is set to roll off the Fed's balance sheet each month.

One big concern has been the lack of liquidity in treasury markets. Can they handle the loss of the Fed's stabilising influence? 👇

The chart is taken from this post by Joseph Wang suggesting that a treasury "buyback program funded with bills could be a powerful tool to manage QT by strengthening the Treasury market and topping up liquidity in the banking sector". 👇

As the Fed heads are fond of saying, all they have are blunt tools (interest rates and QE/QT), so a joint effort with the treasury isn't so outlandish.

This is the idea 👇

...the Treasury would be able to act in a similar role by issuing bills and using the proceeds to buy coupon Treasuries. Money market funds would easily absorb the bill issuance much like the banking sector easily absorbed the additional reserves.

The Treasury would in effect become the dealer of next to last resort while reducing the market’s overall sensitivity to interest rates. This would also free the Fed to maintain a restrictive monetary policy amidst market disfunction.

This last point could be crucial. Given the inflationary environment, the Fed may need to keep rates higher for longer. Without supplementary measures, liquidity withdrawal is more likely to lead to dysfunction somewhere and put a spanner in the tightening works.

(there's every chance something will break anyway because the financial system's as fragile as your favourite crypto bro's ego, but that's not the point)

Buybacks funded by bill issuance can help redistribute liquidity so that QT can proceed more smoothly. The Fed controls the quantity of liquidity that QT drains, but it does not have control over how it is drained.

At the moment, QT is draining liquidity in the banking sector rather than the excess liquidity held in the RRP. This can be potentially disruptive because that liquidity is not necessarily excess, but might relied upon by someone in the financial system.

Buybacks funded by bills would steadily pump the $2.2t held in the RRP into the banking system. This would facilitate a smooth QT by helping the banking sector maintain a high level of liquidity.

The government is issuing new debt, while the Fed holds a load of debt that matures each month. Any maturities above the QT/balance sheet reduction cap will need to be reinvested. Co-operation makes sense when both parties want the same thing: Treasury markets that work.

Whether they can actually agree to do this, and then pull it off, is another question entirely.

So, what does QT mean for stock markets?

The following is via the excellent Brent Donnelly and shows what happened to the S&P 500 the last time the Fed tried QT. 👇

The Fed started QT in October 2017, but (similar to this time), meaningful balance sheet reduction took a while to kick in. The big reduction in the size of the Fed’s balance sheet started in the summer of 2018 and stocks traded well that summer before crashing in Q4. The peak was September 21, 2018.

So, I suppose the acceleration of the Fed’s liquidity reduction should be a yellow light for equity investors again into Q4, but the relationship is murky, and the timing is debatable so it’s more like a reason to lean cautious, not a reason to buy SPX 5-delta puts.

Whether history repeats, rhymes or something else is still an open question. However, the idea that QT is somehow 'already priced in' (Yes I've heard people say it), is a madness.

There's still a load of uncertainty over how it's going to work in practice, so what is there for markets to price in?

It's still early days. Don't mistake the rally for QT doesn't matter. It's just about to ramp up. Eventually, the liquidity withdrawal/redirection and higher rates are likely to take a toll on stocks, especially if company margins/earnings come under pressure at the same time.

The bond market is 'screaming', curves are inverting, but all's calm in credit markets.