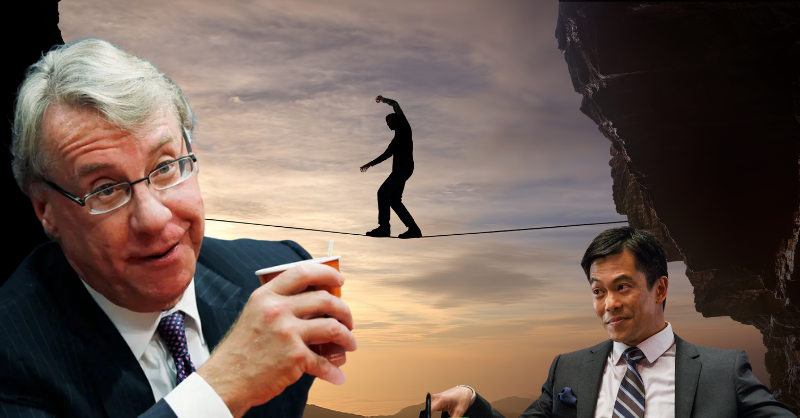 Tightening cycles and subsequent downturns always uncover hidden leverage in the system. Recent crypto liquidations are only part of that leverage, and you could ask just how 'hidden' it really was for anyone paying attention... 👇

Perhaps the same could be said for private equity (even though it's TradFi), so the perception and calculation of leverage is a little different, and there's more nuance too.

Still, risks are being flagged in a few corners of the narrative sausage machine we call the media.

Now, people might ask why anyone should care about private equity. I mean... So what if some private investors and venture capitalists lose money?

"You pays your money, you takes your chances, some you win, some you lose"

And losses in private equity won't affect MY investment, will it?

Errr.... It's a highly interconnected system so don't rule anything out.

Quick reminder of the purpose of private equity... 👇

It's supposed to be an "everyone wins" scenario. Companies get the investment that they need to grow and investors get a return on invested capital due to that company growth.

But in practise, it doesn't always work out that way, and there are definitely risks ahead, especially for the 'late allocators' of 2020 and 2021.

Preqin highlight the unprecedented test for private equity returns, but not before anchoring to the 'old' investing environment 👇

Private equity’s (PE) strong performance and low volatility have helped the industry to secure huge sums of institutional capital. Over the past decade and more, the industry has shown it can insulate portfolios from public equity downturns.

The past decade or so has seen one-way traffic in terms of inflation, interest rates and bond yields, so that might not be the best comparison for the future.

And here's their chart showing how private equity doesn't draw down as much as the S&P 500...

Privately held businesses aren’t required to report their performance publicly each quarter, shielding them from the large swings in valuation that listed companies face. And portfolio companies aren’t as exposed to headline risk the way public companies are.

There are better ways to think of this. Those large swings in valuation are avoided because they're not marked to market as frequently as public companies. And they ARE exposed to headline risk.

If Klarna were publicly listed, that re-valuation would happen daily rather than at each funding round. And a 66% drop would be roughly in line with the declines we've seen in public markets for Fintech type companies.

Affirm, another BNPL company, is the most obvious comparison. AFRM currently trades ~75% lower vs June 2021 prices

Yes, Klarna may have missed out on that valuation volatility in the past year, but that doesn't change the valuation when it's time to raise funds...

As for the no headline risk, you'll never convince me that this didn't have an impact on Klarna's valuation... 👇

Especially as they were seeking funding at a $30 billion valuation as recently as May, before being marked down to $15 billion this month...

Apple is available to trade with Macrodesiac Partner capital.com 👇

TL;DR Just because these firms aren't being marked to market every day, that doesn't insulate them from financial conditions in the wider market. It just makes them more opaque...

Four main determinants of how much money the industry makes — companies’ earnings growth, rising multiples, and the amount and cost of debt — are “fundamentally challenged”

Still, he was optimistic. Private credit was in a stronger position, he said, and the fall in private companies’ valuations “won’t be nearly as severe as what we’re seeing in public markets.”
Private market valuations are set by a process of sophisticated guesswork based only partly on the value of comparable listed businesses.

“For those that have liquidity and [can support the companies they own], this will present more opportunity than risk,” he said.

Every factor we depend on for this to work is fundamentally challenged (or facing an unprecedented test to use preqin's term) but it'll all be fine...

“Some parts of private equity look like a pyramid scheme in a way,” Amundi Asset Management’s chief investment officer Vincent Mortier said in a presentation on Wednesday. “You know you can sell [assets] to another private equity firm for 20 or 30 times earnings. That’s why you can talk about a Ponzi. It’s a circular thing.”

Mortier said the incentives are for private equity firms to transfer assets between each other at inflated prices.

He's not the only one with concerns either. Short-seller Jim Chanos spoke to Bloomberg's Odd Lots last week, and thinks PE could go the same way as the hedge funds that couldn't shake their pre-GFC mindset in a post-GFC world...

Private equity... has had two major developments at their wind at their back for the last, you know, 40 years, but particularly for the last certainly 12 years. And that is massively declining interest rates and rising equity values. So if you are a leveraged buyer of equities, that has been a massive tailwind and what is shocking to me, and I allocate capital, I sit on some investment committees so I see the private equity numbers and I hear the pitches, what is shocking to me is that if you were buying a portfolio of stocks leveraged two or three to one, that you would expect to be doing a hell of a lot better than the S&P 500 over the past 12 years or the Russell, right? You know, even net of fees. And the fact of the matter is that's not really been the case.

And I think that's going to be one of the biggest problems for private equity is the fact that, you know, the returns net of fees and adjusted for leverage have gotten a lot more pedestrian, in the last handful of years.

And if we're going to revalue interest rates structurally higher, where you're not going to get easy exits, and the IPO market, you know, closes down, then private equity's going to have some heavy weather of it. And it has been the asset of choice for institutional investors. There's no doubt about that. And I think, you know, that alone tells me that if you're big in private equity, you ought be taking a look at your allocations and understanding you own leveraged equity. And just because they don't mark it promptly, doesn't mean you're not taking the risks. And that's my concern about private equity.

None of this is to suggest that the entire private equity space is ponzified and about to collapse. This is about the risks in the leveraged, speculative sectors of private equity that haven't been properly assessed and could spill over into public markets due to the tighter financial conditions globally as capital is reallocated.

On that more positive note, Duncan Lamont at Schroders (give him a follow) points out the differences within Private Equity's many moving parts,  👇

Keep your eyes peeled for that hidden leverage coming into view as liquidity is sucked from the system... 👇

Zombies on the verge of collapse doesn't tell the whole story. The Veteran's mining for hidden gems in the small-cap world