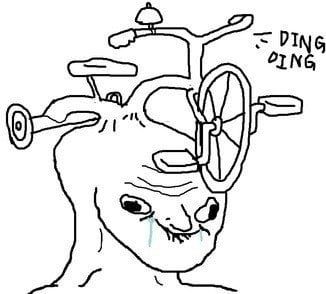 What can we learn from 'dumb' charts?

I think learning from mistakes is in fact the only way that we do indeed learn adequately.

But rather than learning from your own mistakes, where you don't even take on any initial risk, learning from others' is even better.

This last week has been a treasure trove of totally dogshit charts.

First up, we've got the classic...

This is from a certain prominent German finance journo...

What's wrong with this? Well, this is totally not in touch with reality.

You can't complain about a bubble and then say that stocks have gone no where, like he has.

Equities have pushed higher because of central bank liquidity provision.

All that is being done here is that a smaller number is being divided by a larger number.

And the relevance of the Fed's balance sheet comes into question when you ask what happens during an increase of it versus a decrease of it and the effect it has on risk.

If the market expects a liquidity reduction, then it's likely risk will take it as a negative and the index will fall; vice versa for more liquidity being added.

The market is a barometer of liquidity, and is not in competition with the Fed's balance sheet - which by the way, isn't there as a performance metric, so is a useless number to compare it against in the way Holger wants to, even with all other points considered.

I made a contradictory point as well...

Why don't we just use money velocity as a denominator?

I mean, it probably shows the effects of what the Fed and other central banks have been doing in a better light...

It's just as redundant, but at least this has more of a real picture than the 'markets have gone sideways since 2009' conclusion that Raoul, Holger et al seem to come to...

Why is pricing indices in Fed Balance Sheet terms so popular?
I'd like to think that it's due to people being a bit thick.

But I don't think it is.

I reckon it's largely marketing.

He recently made a big transition to being 'irresponsibly long' Bitcoin.

Who might talking about the downfall of the dollar, central banks and the world resonate with?

A lot of people in crypto.

They're likely then to go and buy his subscriptions.

That's absolutely fine to do so...

But it's also fine for me to call out bullshit when I see it, because it's pure misinformation, and quite frankly, damaging to new entrants to the market who will get fixated on this idea, not understanding that it is indeed, well, bollocks.

This one is a classic and has been around for ages.

There are three simple arguments against this one.

Why haven't you inserted wage growth too? Eyeballing the chart makes sense.

Sure, the dollar might have fallen in value since then...

But are you unable to buy fewer goods with your dollar now than you were in 1920?

Here's a document showing wages in the US from colonial times until 1928.

People were literally earning $10-$25 per week.

So why the fuck would you compare, nominally, how much a bar of chocolate costs now versus how much it cost then, without factoring in how much of your earnings that would take up?

Most people could go and buy 30 chocolate bars now and it, well, not be half a day's wages.

The braindeadedness of people is startling.

Why haven't you factored in that no one simply keeps their cash under a mattress? OK, not everyone is invested in the market.

But a lot of people are.

Except for the last 10-12 years, you could have kept your dollars in a bank account and earned interest.

I mean, just look at this chart...

The most simple outcome shows that you still make a return on your USD when invested passively in a savings account over the long term - so it really shuts up that argument.

You are literally living for longer. Would you prefer to go back to 1913 where you die from the flu? Quality of life has increased.

You can sit at home on your phone (that wasn't around then) and order a pizza to your door in under 30 minutes.

And you reckon your dollar purchasing power has decreased so dramatically that it's 'ooooo poor me, let me create a stupid chart and cry over my hard life'?

So to pick up a chart and say that the dollar's purchasing power is a cause for concern is quite frankly, ridiculous.

The problem with the dollar purchasing power chart is that there is no sense of reality, nor any addition of other very important variables.

OK one more argument that I came up with whilst writing...

Currencies are valued against other currencies.

We have established that the dollar's purchasing power is a bit of a misnomer.

So let's take a look at a true destruction of purchasing power.

THIS shows you a real debasement of a currency.

Not that poxy uninformed bollocks above.

And even when you price the dollar versus major currencies, you're still not seeing this ridiculous debasement that they're banging on about.

Oh man, this one is good.

The thing is that I don't necessarily disagree with the premise...

OK maybe I do, but perhaps just the extent of it.

Why's this mad? Technical analysis on an inflation metric?

Let's think about what technical analysis relies upon for a second...

The word 'confluence' crops up when thinking about TA.

You're really betting on other people doing the same thing to drive the price of an asset in your direction.

Now I might be wrong here, but I don't think inflation traders are using technical analysis to form a trade idea on 5y5y swaps.

That would be my first criticism.

My second criticism, which is probably more important, would be that deflation to the extent that he is expecting would likely mean the end of central banking as we know it, since it would show them up to be completely redundant.

At -5% inflation, you're probably going to be experiencing something that would actually make looking at economic data a bit redundant.

Japan hasn't even had numbers like that and they have been in the crap for over two decades now!

This fella was right to use technical analysis on Spanish Industrial Production!

Yeah, and a broken clock is right twice per day.

What this brings into is the idea of confirmation bias.

I have been a critic of back testing strategies for a while now, because in a back test, you can almost always fix it to make things seem 'right'.

Just like the above, you might be able to see something happen once or twice (and if you actually trade it and make money, then great), but as a steadfast strategy, I think you'll find it comes up lacking if you're constantly finding technical patterns on economic data.

To finish this up, I'll leave you with this.

Firstly, there literally is no causation there.

Secondly, the temperature has been... shifted forward by three years... why?

Thirdly, how about the plethora of other factors that lead to lower inflation?

What can we learn here? Apart from this just being stupid, I think the net benefit of this is being able to see that correlations have to be robust for them to have any kind of actionable meaning.

Another thing is that if you attune yourself to finding correlations between two wildly unrelated data sets, then you're going to become unstuck at some point.

Check out this site which shows spurious correlations.

It's probably akin to people thinking there is a correlation between inflation and money supply.

It sounds right, and many hark back to Weimar and Zimbabwe as examples, without really factoring in the many other elements that have way more importance as an economic driver.

But the same people who say there's a correlation between money supply and inflation will be the same people saying that the market is rigged because all of the QE money goes into financial assets.

I don't know what paradox they live in, but I'd hate to be in it.

"Smaller shadow banking together with deleveraging reform suggests that financial market risks are under control" But are they?