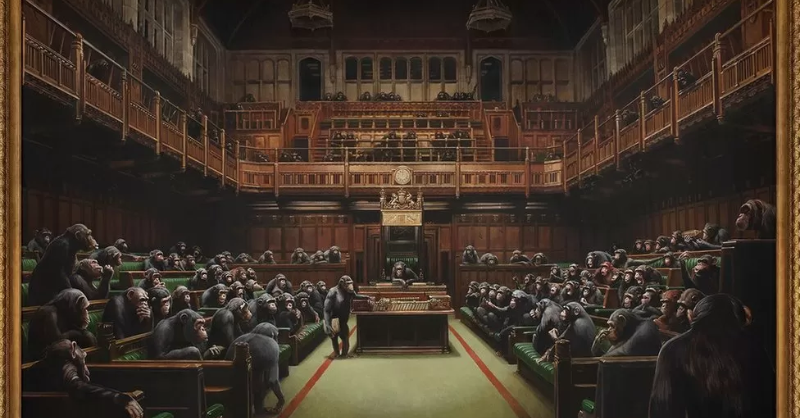 Politicians remain a mystery to most of us. Are they really as inept and hypocritical as they often appear? Tempting as it is to just block them out and completely ignore politics, these chimps (we'll come to it) pass and block laws that can have enormous impacts on markets.

With de-globalisation likely to become a more dominant theme, politicians may well become more influential on markets than they've been in recent memory.

Central banks might become less important. Think about it. If inflation remains high, they can't cut. If there's a deep recession and rates return to the zero lower bound (or below), another round of QE won't be popular with the masses, but neither will austerity...

There's every chance that the 'independence' of central banks could be (formally) confined to history, and deficit spending retakes the reins once inflation abates.

Whichever way you dice it, paying closer attention to politics could actually pay off over the next few years.

Politico run with this theme, and explain it as:

The behaviours exhibited by politicians have much in common with some of our closest ape relatives.

These interactions are typically aimed at making contenders think twice about taking a shot at the crown. But a successful leader needs more than physical intimidation to become an alpha. He or she needs the political skill to build a support base and to hang on to it.

But there's more to the story. And we'll start with this brilliant lunatic. 👇

Jane Goodall spent over 60 years studying chimpanzees in the wild and is known as the only human ever accepted into a Chimpanzee society, when she became the lowest ranking member of the Kasekela community for 22 months.

Her observations about Chimp societies and hierarchies have a lot of crossover into human sociology, especially politics.

Consider this, but take the extremes of the violence away 👇

Goodall also observed the tendency for aggression and violence within chimpanzee troops. Goodall observed dominant females deliberately killing the young of other females in the troop to maintain their dominance, sometimes going as far as cannibalism.

It's not just males that look to establish dominance within a hierarchy...

She says of this revelation, "During the first ten years of the study I had believed that the Gombe chimpanzees were, for the most part, rather nicer than human beings.

Then suddenly we found that chimpanzees could be brutal—that they, like us, had a darker side to their nature."

And what is the dark side of politics, if not a dominance hierarchy playing out in a more civilised way? Lots of noise, chest-thumping and signalling to maintain status...

The following passage (taken from here) is about chimpanzees. It's slightly edited to replace the chimp references with politician. 👇

For a politician to retain power he has to carefully manage his relationships with other powerful politicians. If he can put together a large and steady alliance he will be able to lead the community.

Politicians in the power coalition spend nearly all their time together: they groom, share food and back one another during fights. A politician that is able to use a combination of political strategies is most likely to gain a position of leadership.

Political groups are reciprocal societies: favours are exchanged and a good politician is the hub of this, making sure he includes everyone.

The average reign of a politician who relies primarily on intimidation is only a couple of years at most, whereas those who focus on coalition-building end up staying at the top for 10 years or more. Violent bullies never last long in the leadership role. They are replaced viciously as soon as a kinder alternative is available.

Political leadership is about protecting the troop and maintaining harmony.

So, aside from noticing that politics works in similar ways for chimps and humans, how is this useful?

Our social structures are far wider and more complex. In many cases we belong to more than one tribe. Which means a lot of the grandstanding and nonsense is essentially one long negotiation.

Take Manchin as the perfect recent example. He's been a roadblock for the Biden administration for the past year or so. The Democrats only have a single seat majority in the US senate and he wasn't playing ball on some of their ambitious plans 👇

Until this week... When he suddenly had a change of heart and voted in favour of the (renamed) Inflation Reduction Act 👇

Why would he? Well, according to the New York Times, it's because of this 👇

That pipeline runs through Manchin's state of West Virginia, and legal challenges from environmentalists were delaying and de-railing it. If the bill passes, that's unlikely to be a problem anymore... 👇

The side deal cut by Mr. Manchin and Democratic leaders would give the United States Court of Appeals for the District of Columbia Circuit jurisdiction over all future legal challenges, taking the case away from the Fourth District, where environmentalists had found success.

Admittedly, this is just one angle of looking at politics.

Maybe it's just me, but trying to figure out wtf they're up to through this social lens of hierarchy, status and loyalty (often to more than one tribe) is far more interesting and fruitful than the "OMG, can't believe he just said that, politicians are so dumb" stuff that tends to go viral.

Politics is a pantomime. Occasionally it can be a profitable one.

🔔 The Labour Market's Too Strong - Let's Sacrifice It

Sacrifice jobs to save the stock market. You mean the economy? Yeah, sure.

🔔 Traders Provide No Value To Society

You offer no value to society, you're not producing anything of worth... What's the point of you?