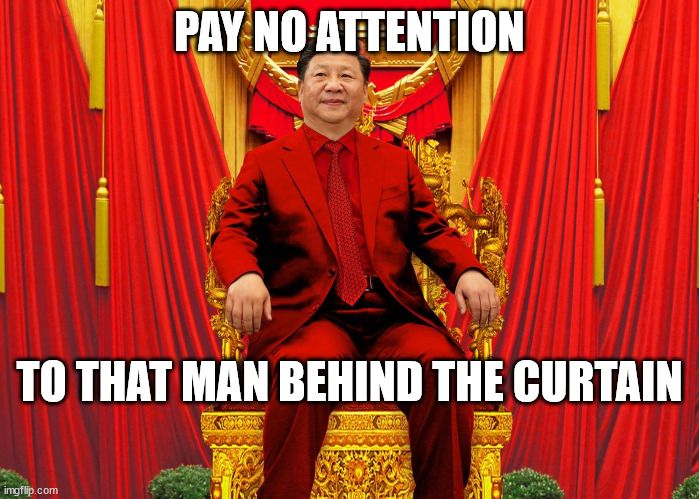 🔔 Pay No Attention To That Man Behind The Curtain

Last week, the CCP fixed everything. Chinese stocks rallied. The bottom's in.
China can resume their unstoppable march towards world domination. /s

Wonderful wizard Xi announced a whole package of measures, summed up by Bloomberg as 👇

China made a strong push to stabilize battered financial markets, promising to ease a regulatory crackdown, support property and technology companies and stimulate the economy.

Only a few days earlier, JPMorgan had called the China tech sector un-investable.

JPM downgraded all 28 Chinese internet stocks under its coverage to neutral or underweight in a sweeping move, calling them unattractive and that the “sector-wide sell-off might continue given the lack of valuation support in the near term.”

“Due to rising geopolitical and macro risks, we believe a large number of global investors are in the process of reducing exposure to the China internet sector, leading to significant fund outflows”

“The sell-off may continue without valuation support”

Fortunately, that valuation support arrived. But what next?

Small firms are getting a big boost 👇

China will give nearly 1 trillion yuan ($157 billion) in tax rebates to domestic small firms to shore up economic stability, state media CCTV quoted a cabinet meeting as saying on Monday.

But where are the drivers for future growth? The promised transformation of the economy?

While there's no doubt that these policy support announcements have shored things up, this isn't a forward-looking economic response.

And the economy may actually be faring worse than believed. As usual, the data is being questioned 👇

A common problem raised is the diverging trend between the 12.2% jump in fixed-asset investment and the slump in the output of key construction materials like cement and crude steel, which fell 17.8% and 10%, respectively.

“Digging deep into the breakdown data, we feel there are multiple contradictions behind the better-than-expected economic data,” Shen Jianguang, chief economist at online retailer JD.com Inc., and his colleagues wrote in a report late Tuesday.
“The true economic situation may not be so rosy.”

The rebound in retail sales conflicts with the pickup in the jobless rate, sluggish consumer inflation and a drop in new short-term household loans, the JD.com analysts said.

Then there's the property sector to contend with.
The true "man behind the curtain" 👇

We've been banging on about the tipping point in the Chinese property market with Macrodesiac Premium members since 2019. We published this fantastic report (if we say so ourselves) back in March 2021, way before Evergrande's "Lehman moment". 👇

This WSJ article is worth paying attention to as the story evolves. First point, the official home-price data isn't the metric to track 👇

Economists and property analysts say one main reason the country’s official home-price data has shown muted changes is because of its composition.

The national index surveys property prices in 70 out of China’s nearly 700 cities, and the largest and richest cities like Beijing, Shanghai and Shenzhen have registered stronger price gains.

The index has a disproportionate focus on cities whose housing prices are stronger, analysts say. Those that have seen the biggest price drops are often not in the index.

And there's even suggestions that registration dates are timed to manage the data.

Some analysts suspect local housing bureaus delay the registration of certain properties whose prices are very high or very low to keep the official data relatively stable from month to month. “They control prices this way,” said Mr. You, with Huaxi Securities in Shanghai.

And these examples bring back memories of the Spanish property bust I saw first-hand. 👇

Logan Group, which has a major presence in southern China, has been promoting some of its properties in the region. One in Liuzhou, a third-tier city in Guangxi province, has offered buyers incentives comprising discounts of more than 20% off the property’s price, five years’ worth of management fees and a raffle for home appliances.

In Xinyang, a third-tier city in Henan province, a developer recently advertised: “Buy a house and get a luxury car.”
Buyers of selected apartments can get cars worth 100,000 yuan, the equivalent of about $16,000, while some purchasing villas could receive a Mercedes-Benz worth 300,000 yuan.

You just don't do this if the demand is there.

Crucially in China's case, these incentives won't show up in the official prices.
The sale price remains roughly the same, but the buyers are getting a lot more bang for their buck.

Until the developers completely run out of cash to make good on the extras...

And who knows when that will be... Perhaps the end of March?

Property firms still have to find $92 billion to repay maturing onshore and offshore bonds this year even as their income streams shrink, Bloomberg-compiled data show.

The lack of visibility for many property firms complicates their accounting. That means auditors are likely to only sign off the report on the last day required by the Hong Kong exchange, Citi analysts wrote in a January earnings preview of the industry.

Nothing's fixed. CCP leaders are playing catch up, fighting fires, but this isn't the great transformation.

And the China 'easing' story hasn't played out yet...

This is STILL the trend to watch 👇

The rebound in retail sales conflicts with the pickup in the jobless rate, sluggish consumer inflation and a drop in new short-term household loans, the JD.com analysts said.

The Bank of England hiked rates, then said some stuff and GBP sold off. What are they playing at?

🔔What is the actual impact of QE & interest rate changes?